The Book of David Volume Two 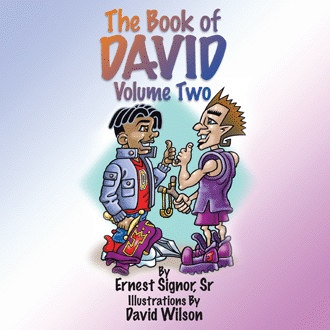 Now time rolls on and David is chillin’ with Jonathon, King Saul’s son, and Jonathan calls David his

Jonathon loved David and they became very close, so close that he gave him everything but his post.

He honored David with his garments and weapons, and then they agreed to an oath no matter what happens.

In the meantime Saul kept David at the palace, and kept him busy and away from all malice.

Saul raised up David and made him head over the army, and David behaved himself and did not act unruly.

David was cool and accepted by all; he walked in confidence and his esteem tall.

Of course, everything is looking and sounding really good, but now things shift and not like it should.

The women of the nation came out to greet Saul, but instead they hailed up David as the conqueror over all.

They shouted Saul's name and how he'd slain thousands, then hailed up David and said he’d slain ten

Samuel summoned the boy named David to come to him at once. When he saw the young man, he had

He anointed David’s head and God’s Spirit rested on him. Samuel wasn’t surprised because that’s what

Water under the bridge? I don’t think so!!!

Continue to follow the saga of David and his troubles with King Saul. Ironically, as David’s life is constantly under threat by King Saul, he earns a friend in Jonathan and takes as his bride Michal; both Saul’s children.

Israel continues to give David rave reviews through his many conquests, and though victorious, still the favor on David’s life by God fuels King Saul’s jealousy.

Learn what it means to be a true conqueror in God and how to withstand the haters and the drama that they bring to a journey that is destined for great things.

S. Ernest Signor, Sr has been involved in Youth Ministry for over 20 years, and has been the Youth Minister of Richard Allen AME Church for the past 11 years.

It has been his passion to take the awkwardness out of reading the Word of God and make it life to youth of all ages.

Being involved in a very active and creative youth ministry has allowed him the opportunity to explore and develop his God-given talents and use them to enhance the ministry.

Ernest was born in Bermuda and has an active family life where he is the husband of Beatrice, and has two sons, Ernest Jr. and David.