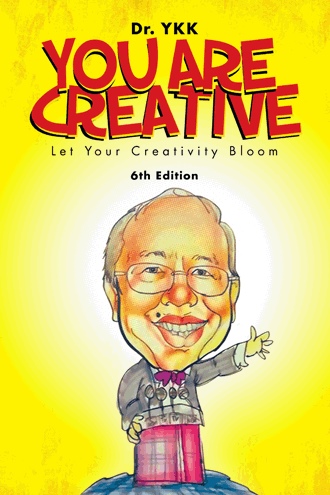 All achievements, all earned riches, have their beginning in an idea.

There is no doubt that creativity is the most important human resource of all. Without creativity, there would be no progress, and we would be forever repeating the same patterns.

All of us are creative; we vary only in the extent to which we have developed our creativity potential.

There are three primary reasons why we need to be creative:

We get more joy and happiness out of our lives when we harness our power of creativity. The more creative we are, the more we become. We continue to grow;  feel more alive;  become charged with enthusiasm, thus leading a more meaningful and fulfilling life. Creative effort is also an antidote to worry.   And what is worry? -the wrongful use of our imagination.

Creative people love what they do. It is not the hope of achieving fame or amassing wealth that drives them; rather, it is the opportunity to do the things they love most. They feel an inner glow that exudes a sense of happiness.

We are most creative during our childhood days (see Bloom 2). This stage is also our happiest. Studies have shown that on the average the little child laughs about 400 times a day whereas the average adult laughs only 15 times per day.

Capitalizing on creativity promotes a positive outlook and sense of well- being. That boosts the immune system, which keeps us healthy. A healthy person is a happier person.

According to a Reuter’s report, creative people tend to lead a more active sex life, which researchers said was no coincidence. Their creativity seems to act like a sexual magnet. A good example is the famous artist Pablo Picasso.

A zest for life, energy, along with sexual desire, these are all qualities of those who embrace Creativity.

Few people personify happiness through creativity better than the late Walt Disney.   Disney’s creations of fantasy cartoon characters such as Mickey Mouse, Donald Duck, and Goofy, along with his Fun-theme parks, Disneyland and Disney World, bring joy and happiness to millions of people today.  What a legacy he left.

As Alice Walker says: “Helped are those who create anything at all, for they shall relive the thrill of their own conception”.

It’s to be an adult like we are now and to look back through the windows of memory, remembering the time when we were little children, but it’s even more exciting to know that we ‘became’ the kind of people we dreamed about as children. This is called fulfillment.

Former US President, Franklin D. Roosevelt has this to say: “Happiness is not in the mere possession of money; it lies in the joy of achievement, in the thrill of creative effort.”

So what is the second important reason we need to be creative?

The human race has survived despite incessant threats to its existence through the application of its Creativity.   Without it, we’d be dead as the proverbial Dodo.    There might be other names for it, such as adaptability, innovation, inventiveness and the like, but call it what you may, in humankind, all of this is Creativity.

This fact was borne out by research conducted by Prof. E. Paul Torrance. Torrance was assigned by the US Air Force, early in the Korean War,  to develop a training program that would prepare U.S. pilots and their crews to survive in war conditions.  This included such situations as being shot down at sea, coming down in the jungle -or even behind enemy lines. After extensive research, Torrance was  survival was something that no program at that time had ever taught – Creativity!

In the  TV series “McGyver” , the hero McGyver always manages to escape from dangerous and almost impossible situations by using his creative imagination.   He survives by finding new uses for the things that he has at hand,  and adapting them as his escape tools.

In a landmark study of over seven hundred nuns, David Snowdon, Professor of Neurology at the University of Kentucky’s College of Medicine, USA, found that there was an 80% correlation between Creativity and the absence of Alzheimer’s disease in these nuns in old age.   Eighty percent!   The march of Alzheimer’s seems to be stymied by an active mind.

We humans are the only organism that is able to modify our living environment through technology.   Without creativity, no technology is possible. We have progressed thus far with our technology through applying our creativity.

“Creative problem solving is the only means of survival whenever a person is faced with a life or death situation for which he has no known or practiced solution.”

“Every time we are faced with a situation for which here is no given solution we must use creative thinking.”

Let us move on to our third important reason we need to be creative. I’m sure it’ll draw your interest.

Do you want to uncover the greatest secret about creativity that will instantly transform you into creative person? Then this book is for you.
This extraordinary book written for the entire family, provides you with the key to unlock the hidden treasures of your mind. A single idea from this book may ignite a spark that could revolutionize your life.
Written in a unique inimitable style, the book takes you to tantalizing journey of discovery, entertainment, amazement and awakening through its well-crafted, practical and inspirational principles illustrated by captivating stories that capture your imagination. In fact, once you started, you may not be able to put the book down!
Dr.YKK breaks new ground on simplicity in applying creativity techniques. Through his research, he pioneers what he calls the Three Primary Creativity techniques. With these techniques, switching on your creative brain is a breeze!
The provocative Mindxercises at the end of every bloom (chapter) stimulates into you to look at any new situation from a new perspective. Another benefit is that these Mindxercises provide creative entertainment and togetherness for your whole family.Reading this book is an exhilarating and unforgettable Mind Unzipping experience! It will make a positive difference to your life.

Dr.YKK is an international business innovation speaker. He is an engaging facilitator, consultant and best-selling author in the field of creativity and innovation. His easy-to-use 3 Primary Creativity Techniques simplifies creativity and his 7-Step system fast-tracks innovation using the least time, effort and resources. It is applicable to any organisation.