If I Only Knew

One Woman’s challenges after a Liposuction procedure turned deadly 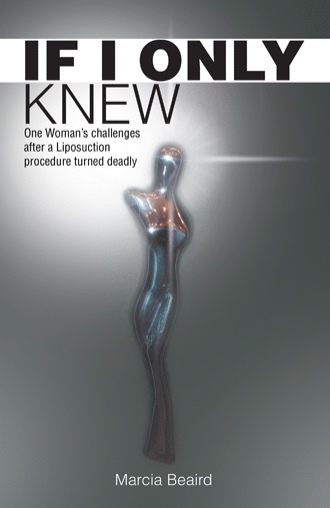 I awoke two months later from a coma, as if I closed my eyes one day and opened them the next. I had the sense that I knew what happened. I was heavily medicated, and my mind played tricks on me, though I had some amount of awareness.
First time I opened my eyes I saw my friend Kelly. “Help me,” I whispered. Kelly had no idea what to do for me. The nurse instructed him to touch my hand and tell me everything was alright.
My sister and mother booked a flight back from Los Angeles immediately and were at my bedside before I knew it. I was so excited to see my mother I wanted to jump out of my bed. She was there to take care of me and make everything better.
I whispered to her in my fragile voice, “You couldn’t have handled another child’s death.”
I must have had a pretty intense conversation with god concerning that.
When I saw Vicki, my sister, I said, “The police gave you my wallet. I was in a boating accident.”
It’s amazing how the mind works when the body is under extreme trauma, like mine was. I thought two men were trying to take the heart necklace from around my neck and toss me into the ocean for the sharks. Was it the drugs, or was it the bacteria, eating at my brain?
Such bacteria should be feared, avoided, and wiped out with disinfectant.
The nurses were a wonderful group of compassionate people. In MICU, I was so disoriented; I couldn’t recall their names or faces.
Judy, one nurse from MICU, came to see me when I first awakened from my coma.
“Can I give you a hug?” she asked. “Word is all over the hospital that you’re awake from your coma.”
People were very happy for me. Many were praying for me. It was amazing how perfect strangers were willing to pray for me.
I awoke with a tracheotomy tube in my throat; the doctors feared my voice box would be damaged, because I’d been on a ventilator and lost all bodily function for a while. I underwent many surgeries and hadn’t moved in two months. Nothing was working.
Sue from the physical-therapy department came to the ICU unit. She wanted to have me sit up and on the edge of the bed. I was ready to try walking, but I was weak. I sat at the edge of the bed and tried to stand, wanting to take my first step. Everyone was excited to see me standing, but I wanted to keep moving.
With the help of Sue and her assistant, I made it halfway to the middle of the nurse’s station. People cheered, as I tried to move my frail body to the diamond shape on the floor. Nurses stopped to applaud. By the end of the day, the story of my first steps spread rapidly throughout the hospital. Dr. Wigoda came in. I heard you took your first step.
I knew, with a lot of hard work, I wouldn’t be in a wheelchair the rest of my life. Sue came to my room each day to work with me. I developed an extra bone in my elbow from lying on it while in my coma. Sue and her assistant worked on that daily. It was extremely painful. When I became stronger, they’d take me to the rehabilitation department to start physical therapy.
I lay in bed, wondering what I’d done that was so terrible that I ended up in such a situation. No one actually does anything wrong. God allows us only what we can endure—no more. Until that point, I didn’t understand why people said, “It’s Marcia. If anyone can conquer this, she can.”
Slowly, I understood. I faced one of the biggest challenges in my life when I woke from my coma. I decided doctors were only human, not God. They were just telling me words. I didn’t have to believe it when they said I’d be in the hospital for more than ten months, then in a wheelchair for life.
It wasn’t going to happen. I had the feeling the nurses wished I had remained in a coma, because, when I woke up, I had to save myself and take the first step in faith. I had my mother place a calendar on the wall, so that I could see it from my bed. My personal goal was for August 30th to leave the hospital. Each day I would have the nurse cross off a day to reach my goal.
I never looked at my skin. Perhaps I worried that fear would overcome me, and I’d give in to the horrible demon that was eating away at my flesh.
My journey began. From that day forth, I believed I would leave the hospital and would be able to run my own life again. Positive thinking has a big influence on healing. If a person tells his mind he can do something, nine times out of ten, he will.

Would I have chosen this path? Being a flight attendant with the airlines, the opportunities are always there to fly to any country and get any procedure imaginable done, looking as if we had just returned from a spa weekend.

Why not? Just a simple little liposuction. That was the day that changed my life forever. Within forty eight hours, the paramedics were called. My body was septic, and I was in renal failure. The doctors would eventually remove almost eighty percent of my skin to save my life. This deadly bacteria was sweeping through my body like a freight train.

I went from a perfectly healthy person to death’s door in a matter of days. It was going to take more than disinfectant to kill this monster.

I was on a journey now, and it was up to me to take control. I knew my faith in God would help me conquer whatever lay ahead. There was a reason I was still here. I was not going to allow this monster to rule my life, but inspire me to take the first step in faith and dig deep down into my soul. I would find the woman that God had put on this earth and to continue his plan for my life. I’ve learned that hurdles in life are meant to be jumped over, not something to stop us. Lots of prayers, faith, and one exceptional doctor gave me the inspiration to believe.

For further information and to contact author please visit www.MarciaBeaird.com

Marcia Beaird gives an intimate, true story of pain, loss, and triumph. Being raised in Orange County, California, by a supportive Christian family gave her strength to be a survivor. This true experience is what gave her the inspiration to tell her story. Today in Ft. Lauderdale, Florida, she continues educating people that they are more than their body and teaches the importance of self-love.