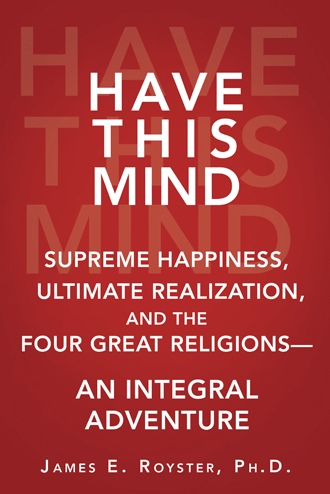 Have This Mind: Supreme Happiness, Ultimate Realization, and the Great Religions—

Because reality appears to us only in and as consciousness, Have This Mind begins its analysis of religion and spirituality by discussing the nature of consciousness and, among other things, shows that the form of consciousness we use most commonly, the thinking mind, always distorts reality by breaking it up into seemingly disconnected parts.
The focal point of all religions is some form of—or something akin to—'God,' named in this book Ultimacy. Ultimacy is shown to necessarily appear dualistically as manifested in time and space, i.e., as we think about it. In itself, however, Ultimacy is nondual and all-inclusive, with no religion or any cultural form or national group having favored status.
Religion is shown to assume three main forms, exoteric or conventional, esoteric or mystical, and metateric (a coined term) or nondual. These forms represent ascending levels of personal growth and expanded awareness, and are linked briefly with the work of Ken Wilber and the Integral Institute.
The three ways of being religious are found in all religions and are more determinative of one's spiritual outlook than any specific religion itself. The chapters on Hinduism, Buddhism, and Islam present the basic features of each, while highlighting the esoteric and metateric forms. Each chapter concludes with the spiritual biography of two of the most highly realized persons from the tradition. These three chapters are presented from a strict phenomenological standpoint, that is, from the perspective of the practitioners and without bias from outside.
Since most readers are likely to be familiar—though perhaps limitedly—with Christianity, its history and main features are also presented objectively. Where differences appear among adherents, however, a more progressive, liberal, rational, and transrational interpretation is offered. Here the book becomes constructive by interpreting Christianity according to the psychospiritual principles found to be operative in all the higher religions. Again, the mystical and nondual dimensions are featured. This chapter is followed by one that distinguishes between saints and sages, and then introduces fourteen, post-biblical Christians who exemplify esoteric/mystical and metateric/nondual spirituality.
The final chapter argues for an integral practice. It draws from the common features of the four religions and, by way of demonstrating how one religion can benefit from another, shows how the transformative practice of Christians can be enhanced by acquaintance with Buddhism, arguably the most practice oriented of the world's religions.

Unique/Distinctive Features of Have This Mind—

(1) Uses a rational, logical, and systematic approach by locating spirituality, religion, and God in human consciousness rather than in doctrine, ritual, etc.
(2) Distills the many and often conflicting views of God in the world religions to the notion of Ultimacy, while offering a model that accounts for these differences and, at the same time, overcomes or transcends contradiction.
(3) Introduces the main features of the four largest religions of the world, while focusing on the transformative dimensions of these religions that facilitate the development of an inclusive, stress-free and eminently happy life.
(4) Illustrates these transformative principles and practices with biographies of exemplary saints and sages from each tradition.
(5) Distinguishes between three ways of being religious—regardless of one's particular religious tradition—based on evolving levels of personal consciousness. It does this by adding a third category, metateric/nondual, to the usual exoteric/conventional and esoteric/mystical distinction.
(6) Of particular import to Christian readers are interpretations of biblical and theological views that facilitate transition from a traditional and mythic outlook tending toward exclusivism to one that is rational, transrational, and inclusive.
(7) Demonstrates how one religion can benefit by drawing on the transformational practices of another religion.

The author is retired from thirty years of teaching at the university level where he taught world religions from a phenomenological perspective. In all his courses, he emphasized the personal transformative features of religion, and regularly taught an advanced seminar on religion and personal transformation. He has published articles on spirituality and personal transformation in scholarly journals, and has spoken widely beyond campuses on the subject matter of the book. He was engaged in educational work in India from 1960 to 1962, in Egypt from 1962 to 1964, and in Kenya from 1964 to 1965. For ten months in 1983 and 1984, he traveled in North Africa, the Middle East, India, and Asia on sabbatical leave while studying the world religions as actually lived and practiced. From 1986 to 2007, he served as moderator of the Cleveland Conference of Religions, an assembly of the world's major religions that held semiannual conventions open to the public. He has two master's degrees and a Ph.D., and currently holds emeritus status at Cleveland State University.

Likely Audience for Have This Mind—

(1) Those who want a reasonable and yet transrational view of religion;
(2) Those disaffected by the religions commonly seen in contemporary culture (the book
is dedicated to all who are drawn to religion, and especially those who are not);
(3) Those desiring a brief introduction to the major world religions, especially one that emphasizes religious experience rather than just history, doctrine, rituals, etc;
(4) Colleges, universities, and theological seminaries that offer progressive, liberal arts or humanities programs.
(5) Those drawn to the writings of Huston Smith, Ken Wilber, Marcus Borg, John Shelby Spong, Eckhart Tolle, Ram Dass, Lama Surya Das, etc;
(6) Those interested in an antidote to the anti-religion writing of such authors as Christopher Hitchens, Richard Dawkins, Daniel Dennett, Sam Harris, and others.

Have This Mind uses a rational, logical, and systematic approach to spirituality, religion, and God by focusing on the mind or consciousness rather than doctrine, ritual, etc. It provides a model that resolves the many seemingly conflicting views of religion and God.

The four largest religions of the world, Hinduism, Buddhism, Christianity, and Islam, are introduced in terms of their transformative dimensions that lead to an inclusive and eminently happy life. These principles and practices are illustrated with biographies of exemplary saints and sages from the traditions. Have This Mind outlines three different ways of being religious—regardless of one’s particular religious tradition—based on a progressively maturing mind. Of particular import to Christian readers are interpretations of biblical and theological views that facilitate transition from a traditional and mythic outlook tending toward exclusivism to one that is rational, transrational, and inclusive.

On the basis of an appreciative and inclusive view of the world’s great religions, one discovers how these religions can actually enhance one’s own spirituality and religious outlook. A perspective central to Have This Mind is that authentic religion and spirituality lie in the loving quality of one’s life and not simply the ideas or beliefs held in one’s mind.

The author has lived in India, Africa, and the Middle East, and has travelled widely throughout the world. He taught the subject matter of this book for more than 30 years at the university level. His approach is non-doctrinaire, conciliatory, progressive, and integral, with an emphasis on understanding that which is deeply human and essential.