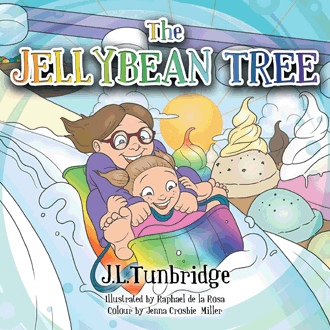 Jack grabbed hold of the sisters’ hands and took off towards a house with a wafer biscuit fence.

“Ariadne is off being a Friend right now, so you can stay in her house.” Jack told them. “Go inside and lock the door and all the windows and don’t come out until the sun wakes up again.”

“But why?” asked Jaybee out of breath from running.

“No time to explain. Keep everything locked tight, don’t even open a window until it’s bright again, okay?”

Jaybee and Squib barely had time to nod before the King ushered them inside, closing the aerated chocolate door. They heard his footfalls dashing to his own house.

Well this was very peculiar. The girls wondered why a land with no grownups and no vegetables was so strict with bedtime. At least Jaybee wondered. Squib’s eyes were exploring the house of goodies.

Each room was lit by a fishbowl-sized orb that had inside a handful glowbugs. Since they had been told they weren’t to leave the house til the next morning, the girls decided to explore the gingerbread cottage. They admired the curtains of fairy floss and the rugs of jaffa cake. The nibbled on the liquorice all-sort lounge chairs and the enormous Anzac-biscuit table, and even had a lick of the polished butterscotch floorboards. Up the crunchy biscotti stairs they climbed to find a sweet little bedroom with a Jersey Caramel bed.

Jaybee and Squib weren’t the least bit tired so they made the logical decision to jump on the bed until they were.

Dark had long since fallen by the time the sisters’ legs wanted to stop jumping. They had just pondered the thought of tucking themselves in beneath the comfy warmth of the top layer of the Jersey Caramel bed when they heard a scratching type noise coming from somewhere outside. Looking out of the window they could see nothing but darkness, but they knew they weren’t imagining things as they had both heard the same sound, so the two sisters set off down the crunchy biscotti stairs to investigate.

Now Squib and Jaybee felt a bit nervous, but it was probably just a chocolate tree wanting some attention, surely. The sisters followed the noise, which seemed to be coming from outside the front window.

With a deep breath for confidence, Jaybee approached the front window and very tentatively pulled back the fairy floss curtain.

Only the night. Jaybee hid a quiet sigh of relief, not wanting her little sister to see she had been quite frightened. There was nothing outside but darkness and shadows. Of course, the two sisters hadn’t been away from home before so it was only natural they imagined scariness at the windows. But then Jaybee stared harder. Did that shadow move?

Seeing her big sister focusing on something, Squib pushed her face to the window and she caught sight of what had attracted Jaybee’s attention.

The girls held their breaths. They weren’t imagining things, something was indeed moving out there in the darkness. The very shadows outside Jaybee and Squib’s cottage seemed to be alive. They moved about so fluidly one might think they were riding a gentle breeze. Possibly they were as the two sisters couldn’t make out any feet.

Before they had enough time to wonder much what they were seeing, a shadow stood upright and stared with glowing red eyes right at the window where the girls peeked from.

Frightened and shocked, the girls gasped.

The shadows heard them. They whipped their heads towards the cottage window. Every one of the moving shadows had the same glowing eyes.

Barely able to hold in their screams of terror the sisters hit the floor. Grasping for each other’s hands they dared not move. Whatever the shadow creatures were they were all now right outside the cottage.

Jaybee and Squib quivered in fear. Something rattled the door handle, but at King Jack’s insistence the girls had locked everything up tight. The creatures couldn’t get inside. But the sisters could hear them moving around outside looking for a way in.

Take a short break from vegetables, and come on an adventure in a land where lollies, chocolates, and candies grow on trees. There are mountains made of ice cream, and it sometimes rains chocolate milk. Plus, if you pay attention, you might just learn how to chase away nasty dreams.

J. L. Tunbridge is a grown woman who believes in fairies and unicorns, and every time she drinks from a drinking fountain, she secretly hopes it will be lemonade. Being born and raised in Perth, Western Australia doesn’t stop her from spending most of her time in some imaginary world.