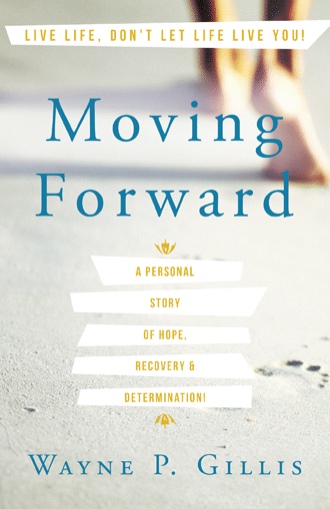 My theory applies to each and every thought and experience that we are involved in, and it provides the foundation for our “energy source.” Setting high goals and then exceeding them can be an unrealistic approach to reality; however, setting realistic goals and then achieving them gives you the opportunity to reach your goal, feel proud, and then reevaluate the situation. You can then adapt and set a new goal to focus all your attention and energy on. Over the past seven-plus years of my life, I have learned that perspective is everything! Here is mine.

On September 7, 2005, I experienced a life-changing event. I am not a born-again Christian per se, but I have been given a second chance at this game called life. On that day, I was involved in a severe automobile collision when a car struck the motorcycle I was driving. I suffered numerous physical injuries, including seven broken ribs, a ruptured spleen, a bruised liver, a torn bowel, fourth cranial nerve damage, hence the double vision, a bilateral pneumothorax, or two punctured lungs; however, the most dramatic and life-altering injury was the closed-head traumatic brain injury (TBI) I received. I was unconscious at the scene, so my number on the Glasgow Coma Scale (3 to 15) was simply a 3.

Unfortunately, my injured brain, like the hard drive of a computer became fragmented, with all of the data disbursed throughout it. In an attempt to rebuild the neural pathways that had become misdirected, I sent out an email to a select group of people to begin rebuilding the life that was taken away from me. I did this with hopes to adapt to the barriers & obstacles now placed before me. http://youtu.be/GmGijhz_Oro

To my enlightenment, the responses were very fulfilling. Even to this day, I reflect on them when moments of weakness arrive. In comparison to what my neurosurgeon indicated, injuries like this on outgoing and extroverted personalities such as mine prove very challenging for those individuals to handle. In my early discussions with the vocational counselor at the Nova Scotia Rehabilitation Hospital, he gave me a new term to now use. In my discussions with him, I often said that I now had to “react to certain situations.” It was then that he said, “Instead of the word react, use the word adapt. Instead of reacting to a situation, adapt and find a new way to formulate the end result.” Approaching life this way provides you with personal ownership and accountability for your actions, and it’s more productive than reacting to things outside of your control. As a result of this revelation, the website www.always-adapt.com was born!

I took a recent trip to Toronto, Ontario, to see Dr. Wayne Dyer at the “I Can Do It!” conference, and he revealed that he considers himself an inspirational speaker, not a motivational one. It is my hope that by providing this information, I too can help people achieve their goals—not through motivation or inspiration but through determination. People can be motivated or inspired to follow a path, but if they are not determined to achieve what they choose to do, they will fall short of the desired outcome. Using motivational or inspirational tools to achieve what you choose to do provides a solid foundation for your energy source.

This energy source depends on what country you are born in, as it is defined by the people around you and the god of their choice. Christianity, Islam, Buddhism, and all other capital-R religions—each represents organized faith and requires discipline to follow the guidelines determined by each. On the television show Long Island Medium, the star of the series has the ability to communicate with people who have crossed over to the other side after death. Once they have left the physical world they remain intact, and through her, they can communicate quite powerfully and specifically to the person who engages this star’s special gift. Addressing specific details that only the person being communicated to would know eliminates any chance of her simply guessing the details of this or that event.

With the personal views of mine and with this information watched on television, the spiritual belief gains significant weight in the religion/science debate. As religions foster a geographic theme, the energy received from this gathering of information is spiritual in nature. However since most religions share a similar belief system, they reflect for me the ‘source energy’ the universe has.

What causes one individual with devastating lifestyle injuries to heal better than someone else with similar injuries? If the person has that cognitive option, it ultimately boils down to his or her ability to choose to continue to recover. It is here—through this choice—that we see different levels of cognitive adaptation, ultimately determining what an individual is able to achieve. Having the ability to make the choice is the real difference. According to Dr. Wayne Dyer’s book Excuses Be Gone, one must choose, not excuse. No matter how motivated you are or how inspired you become, the reality is that your ability to achieve your goals boils down to your choice! I have learned that to make this choice, you have to be determined to do so.

This is the true story of when a sudden moment of impact took my life away. Though I am not “born again” in a religious sense, I have been given a second chance at this game called life. This is my story of hope, recovery, and rebirth. On a brisk September afternoon, I was involved in a severe automobile accident when the motorcycle I was driving was struck by a car. Among my numerous physical injuries were seven broken ribs, a ruptured spleen, a bruised liver, a torn bowel, and a bilateral pneumothorax (two punctured lungs). The one that altered the course of my life forever though was the closed-head traumatic brain injury I received. Gratefully, I not only survived this intense injury but have recovered remarkably well and am now thriving against all odds. It has become my goal to share this story of recovery in order to assist others in keeping the one thing that changed my life, the choice of always moving forward. Choosing to adapt to the change instead of simply reacting is a very powerful tool. Visit: www.always-adapt.com to recharge your Moving Forward drive.

A former employee trainer for a national bank, Wayne built and sold a successful business in Florida before returning to Canada to go back to university. In following his direction to become a medical doctor, taking the course The Psychology of Law altered his path. In 2005, however, a car struck his motorcycle, and topping all other damage, the traumatic brain injury (TBI) shattered his life. Rebuilding who he once was, Wayne lived in Charlottetown, PEI, Canada with his wife and two sons, so she could fulfill her lifelong dream. In May of 2013, she graduated as a DVM.