Driven by the Divine

A Seven-Year Journey with Shivalinga Swamy and Vinnuacharya 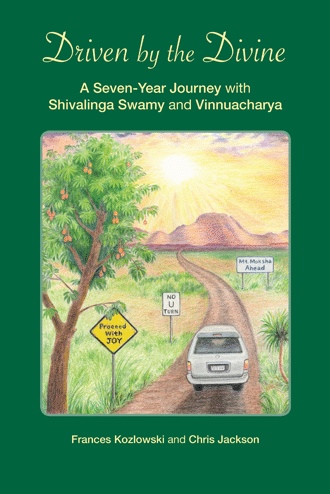 Vinnuacharya and I had returned to Michigan. Caught up once more in the demands of teaching and managing a home, I had completely forgotten about the speedy dark motorcycle adventure with Vinnuacharya. I still followed the sadhana I had been given, but my mind was frequently distracted by financial difficulties. The basic problem wasn't hard to figure out. There was too much money going out, not enough coming in, and the situation was worsening. My tutoring business was suffering, and I had fewer students than in previous years. The Michigan economy was struggling, and I, like many others, felt the pinch.

Early one evening I was especially upset over some looming financial concern. Practicing detachment at that point was impossible for me because I had allowed myself to plunge down into a dark negative emotional abyss of anxiety and depression. I couldn't climb out of the hole. Vinnuacharya was in the kitchen making sambhar (soup) and rice. I came into the kitchen crying and upset. Vinnuacharya listened to my sad ramblings as he continued to rinse and chop vegetables. I was like a child, asking my father to fix everything, to make everything better, to make the problem go away. Finally, he stopped his chopping and said, "Wash your face and go into the puja room and tell Lord Ayyappan your story. Ask him to help you." So that's exactly what I did.

It was almost sundown. I opened both windows in the puja room, then sat down on Vinnuacharya's meditation seat, not mine. The cool breeze outside smelled fresh and clean as it entered the room. I felt the breeze on my face and remembered that it was one of Ayyappan's 108 names, "Lord of the Wind" (Maarut). I started to tell Ayyappan about my financial problem, but then I stopped. He already knew about it. Sitting there embraced by God's presence in the wind, I asked him to help me remain detached so that I could solve problems without becoming emotionally crippled by them. That was really the biggest problem - more than the shortage of money. Then I mentally repeated Ayyappan's mantra, "Swamiye Sharanam Ayyappa" (I surrender to you and take refuge in you, Ayyappa).

Time passed. I continued to sit and repeat the mantra. Then I felt a quick jerking jolt. In an instant I found myself transported back to India with Vinnuacharya. We were on the motorbike once again, riding headlong into the darkness of the night. Then in a split second the image changed, and Vinnuacharya had become Lord Ayyappan, and the motorcycle had become the mother tiger! It was exactly like the first verse in the song that Shivalinga Swamy had given to me months earlier. I was "Riding on a tiger with Ayyappa, holding on tight to my Ayyappa, on a tiger's back so sure and strong, Ayya picked me up as he rode along."

The vision was both cleansing and comforting. I thanked Lord Ayyappan for healing me in such a unique and perfect way. And I thanked Shivalinga Swamy and Vinnuacharya for orchestrating this experience for me. I went back into the kitchen and told Vinnuacharya how he had become Manikantan/Ayyappan right in our puja room/temple. He smiled and said, "Dinner is ready."

In Driven by the Divine you will

• Discover the world of Jyotish and Vedic Astrology

• Learn about the planetary deities/Navagrahas

• Step into the world of supernatural powers and siddhis

• Journey to Arunachala, Lord Shiva's mountain in the South

• Dance with Vinnuacharya at a Coorgi wedding in Mysore

Frances and her co-author, Chris, were students of Shivalinga Swamy and Vinnuacharya for seven years. Frances, a retired reading teacher, writes devotional poems and songs. She lives in Kalamazoo, Michigan. Chris is currently pursuing a nursing degree. He lives with his family in Scotts, Michigan.