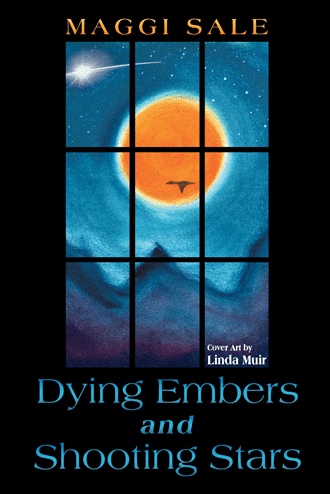 Chapter 1 …… Monday pm
There was nothing to indicate that anything of significance was about to shift in the bowels of her being as Margo slowly pushed her sleeping grandchild through the animated groups of Christmas shoppers. She and her daughter shared a heavy silence as they weaved through the crowds who were thronging the streets of the small Scottish market town. She was immediately brought up short however, when her daughter happened to mention that Margo’s former-best friend and her former-lover had together given a housing reference for her former-husband.
He had returned, unexpectedly, from South Africa the previous week, having been molested by two Rottweilers, and was now homeless, jobless and wifeless…..again! Margo suddenly, and very unwillingly, felt caught up in a web of life from which she had thought she was well and truly, and gratefully, free. The information left her feeling strangely disturbed! The painful, simultaneous tightening in her chest and the pit of her stomach, had her casting her attention around to locate the nearest Public Convenience. Evacuation was certain….but in which direction, she was unsure!
Her compassionate daughter mentioned, on her return, how 'queer' it was how things sometimes transpired; her trained, perceptive eyes checking out the effect of this news on her apparently hard-shelled, but super-sensitive, Cancerian mother. She was aware, as were few others, that the onset of this dark, winter season heralded several emotive triggers, anyone of which could sorely test her mother’s resolve to see it through without the crutch and comfort of anti-depressants. The anniversary of a loved one had already been effectively dealt with, a week or so before; the event shared within the family as they each remembered their mother, wife, sister, aunt, daughter and friend in their own unique way. The other triggers, due at the end of the week, were for Margo to face, and deal with, alone…… as always. Her stomach churned at the thought of their annual return, trailing as they did, perpetual ribbons of regret and sorrow.
As the three generations passively, and distractedly, window-shopped together under the bright Christmas streetlights, she confided in her daughter that she was ‘struggling a bit’ without the support of the medication, knowing the depth of that understatement, even as she uttered it. Feeling the familiar panic rise, Margo quickly fabricated the need to do some personal shopping and left her daughter to head home alone, pushing the still-sleeping toddler in her buggy.
With her heart pounding in her throat, and the tears threatening to draw the attention of the passing shoppers, she watched her two most precious beings disappear into the Christmas crowds, repeating to herself, like a Mantra, 'It’s all right. It’s all right. Everything will be all right,’ until the rising panic subsided, her teeth stopped grinding and her jaw slowly relaxed, allowing cold air to penetrate as far as the pit of her abdomen.
*******
Later, in her daughter’s family home, the rest of the evening dragged, as Margo went through the motions of playing happy families amid her ex-husband's pathetic invitations to inspect his extensive, suppurating wounds, which were still receiving daily attention from the District Nurse. But she did, in spite of herself, feel genuine compassion for a man of his retirement age who, in the space of a less than a year, had been flung out of China because of his affair with one of his students; had been flung out of Switzerland for attacking his second wife; and had finally been forced to leave South Africa following the Rottweillers’ attack. She noted wryly that the first two evictions involved infidelity and violence, the psychic scars of which she, herself, still carried. ‘Little change there, then!’ she inwardly, and bitchily, mused.
Margo chose not to reveal to him that she now knew of this odd alliance of her former female friend and male lover in procuring Grace and Favour Housing for him. As always, the loud silence of unspoken angst stymied any possibility of spontaneous conversation around the beautifully-prepared table in her daughter's home. Margo's heart bled for her first-born, who had always been the mediator within the family, knowing that her efforts were to little avail. It was a quarter of a century since Margo had shared any significant dealings with this man and her memories of their shared life, spanning seventeen years, were not good; and she couldn't feign otherwise.
She tried to breath through the rising tension that formed a hard lump under her breastbone and focus instead on small talk with her three grandchildren whom she loved dearly but seldom saw during these short, dark days of winter. Although her village home was only fifteen miles distant from her daughter's home, Margo rarely visited it as she normally lived and worked nearly eighty miles to the north. A real and conscious concern for her individual impact on the Planet curtailed more regular trips and she longed for the day when she could move to her rural retreat on a permanent basis.
With undigested food threatening to return to her plate, she eventually made her excuses of having to make an early-morning start to return to her work in the city. In truth, Margo craved the opportunity to be alone in order to consider the implications of this apparently innocuous information, provided a scant hour ago by her firstborn.
Why had it so strangely, and unexpectedly, disturbed her?

A chance remark by a sensitive daughter to her depressed mother sparks off this fulsome story. Unresolved issues, that have been haunting Margo for most of her adult life, are vividly recalled as she is catapulted into an intense psychological journey over a period of five days. Her re-awakening mind becomes increasingly aware that it has been set on automatic pilot for some years and little, further purpose is served by her accrued defences. In the process of review, she begins to recognize the psychic supports that have been with her all along and is somewhat surprised, as was the writer, at their identity. Internal landscapes range from a childhood in Scotland, to adulthood in Central Africa; from a stable village home, to a precarious city flat; from the wild, West Coast of Scotland, where gulls fly, to the wild streets of Glasgow, where gangs rule. The personal issues are explored with candour and pathos; but there is just as much genuine humour shared in the unfolding of these very human, and universally-recognized, life-situations. With its graphic imagery and flesh-and-blood characters, the story draws the reader into mystic worlds. The Author shines a light on the inner life and perpetual interconnectedness of all things and all beings. Ultimately, it is a tale of resilience and growth; insight and healing.

Retired inner-city Social Worker and senior Grandmother on the Scottish Council of Grandmothers Circle the Earth. Celtic Hospitality prevails in Maggi's Glasgow home where the Global Exchange Youth of the World refer to her as Bumma. She truly is one of Jock Tamson's Bairns and invites you to join her.