Wake Up and Join the Evolution

How To Create a world of peace, prosperity and happiness 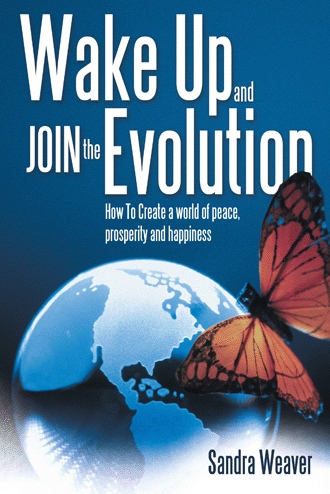 Much has been written about the Mayan calendar and its predictions for the year 2012. The responses to these phenomena have ranged from those predicting it will be the end of the world to spiritual teachers who believe it will be the beginning of an era of peace and prosperity.

This book is not about a year or a specific date in history as much as it is about the amazing Universe in which we live. It is about the magnetism of the earth and how we are connected to it and to every other being on the planet. It is about how we are interacting with all life on Earth and the outcome of that interaction. It is about becoming aware of our beliefs and whether they are still true today. It is an invitation to look at the world we have created and decide whether there might be a better way of living. Most importantly, it is a wake-up call for everyone living on the planet today. You are here for a reason. It is you, in cooperation with your fellow “Earthians” who will determine the future of our lives here on planet Earth.

Gregg Braden, one of the greatest resources for this book, has stated that, as our planet makes its shift and we come to the end of a 5125 year cycle, those systems that are sustainable will thrive and those which are not will collapse. We have seen the collapse of our financial system.
When we look at our economic system and the way we do business, our education system, security, health care and even the way our government is run, it’s pretty easy to see that they are not working optimally. Never in the history of our planet, have we been faced with so many crises of such great magnitude. Our first inclination has always been to try to solve the problem by doing the same things we have done before, perhaps just tweaking it a bit. Albert Einstein defined insanity as “Doing the same thing over and over and expecting different results”. We will not be able to solve our present crises with the same thinking that created them. This is a window of opportunity to change our thinking and consider new ways of living. It is up to us living on the planet today to respond to the crises and do what is necessary to sustain a high quality of life for everyone. Our biggest challenge will be our willingness to change our beliefs.

We can change the way we believe if we take a look at the beliefs we hold and where they came from. Then, just for a moment, entertain the idea that they may not be true today. Most of what we believe we have learned from our parents, teachers and spiritual leaders. This gave us our guide as to what was right or wrong, true or false. We have been living with them for centuries as each generation passed them on to the next. The beliefs that we have held in the past seemed to have served us well, and we have been doing the best we know how. Now, with scientific facts staring us in the face, we need to re-think many of our old beliefs. This will not be easy. Even scientists have had to admit that some of what they had previously believed was an indisputable fact has been proven to be false.

What are the beliefs you hold that you deem to be the absolute truth? Are there beliefs concerning God, religion, government, politics, environment, education, health, physics, family, marriage or other areas to which you hold fast? Would you be willing to change those beliefs if it were proven to you that they were not true? If scientists who have long held proven beliefs can, with new information and discoveries, accept that those beliefs are no longer true and move forward with that information, should not we be able to at least consider re-thinking our beliefs?

Could the human race become extinct? There have been five mass extinctions, and there is evidence that we are deep into the sixth. We know we cannot continue to depend on non-renewable resources for energy. While some of us will delight in saying “I told you so” when discovering that we are not the cause of global warming, that does not mean we can continue to use our natural resources unwisely.

Studies now show that changes in the earth’s magnetic field are associated with changes in the brain and nervous system activity. Changes in geomagnetic conditions affect the rhythms of the heart more strongly than all the physiological functions studied so far. This can be measured. We have the ability to create powerful emotion in our hearts, and that can affect the magnetic field of the earth.

The Global Coherence Initiative is a collaborative research project with the Institute of Heart Math, Dr. Elizabeth Rauscher and other engineers to design, build and maintain a Global Coherence Monitoring System. (GCMS) The Global Coherence Monitoring System will establish a worldwide network of sensing stations to measure fluctuations in the earth’s geomagnetic fields. These sensors send out a signal every thirty minutes which show the strengths of the magnetic fields of the earth. This is important because we now know that we are connected to those fields. The rhythm of these fields has a natural ebb and flow. However, on September 11, 2001, the rhythm spiked to an unprecedented level. This was caused by human heart based emotion such as anger, fear and sadness in response to the attack on the twin towers. That increased rhythm brought us together in a state of coherence for a brief window of time. As time passed and we resumed our lives, the rhythm went back to its normal flow. Following that experience, scientists went back and looked at other events. What they found is that it is not only tragedies which trigger a spike in the magnetic field. Events such as a Super Bowl can also affect it. The largest spike in the magnetic field of the earth occurred during the last episode of “The Bachelor”. These events showed scientists that when we “feed” the magnetic field of the earth with coherent emotional experiences, it can impact a great number of people.

What does this mean? When groups of people collaborate to send coherent heart care to areas of unrest or suffering, it can help to reduce that unrest or suffering. Emotions not only create coherence or incoherence in our bodies but, like radio waves, also radiate outward and are detected by the nervous systems of others in our environment. It has been proven that a small group of people can actually impact larger numbers simply by focusing their thoughts.

The heart does more than pump blood. It actually has a nervous system (a brain in the heart). It has been proven that the heart sends more to the brain than the brain sends to the heart. The heart produces oxytocin, a love hormone. As an electrical organ, the heart creates an electro-magnetic field beyond the body. Thus we actually broadcast our feelings.

Our brain is a thinking tool, but science has now shown us that the heart is much smarter than the brain. In fact, the electromagnetic system of the heart is five thousand times stronger than the brain’s electromagnetic field. That means that heart based decisions are generally much better than those thought out by our brains. Studies have confirmed that when we have a thought, that thought is first sent to the heart. The heart, based on the emotion of the thought, then sends a signal to the brain as to how to behave. For a scientific explanation of this, please refer to “Spontaneous Evolution” by Bruce Lipton.

One of the discoveries science has made is that we are all truly connected. There is no “empty space”. Everything we do or think affects another in some way. I think it is interesting that the Internet has emerged at this time, followed by Face Book, Twitter and other social media which keep us connected. We can now reach thousands of people at one time through teleconferences and e-mails.

Are we approaching the end of the world or the beginning of a new way of life?

Will we become extinct?

Does our heart have a brain?

Are our core beliefs really true?

What do our emotions have to do with anything?

We are living in the most exciting and critical time on this planet. Each of us is here at this time for a reason. Our choices will determine the future of our children and grandchildren and whether they will have a future here on Earth. Wake Up and Join the Evolution presents scientific facts that have grave implications for the future of life on planet Earth. It challenges us to examine our beliefs and decide if they might still be true. It asks us to look closely at the world we have created and answer the questions: Is this a world that works for everyone? Are we enjoying peace and prosperity? Can we do better? Finally, it offers resources to verify information and delve deeper into the truth of what is happening on our planet today.

Sandra has always been a passionate advocate for a world free of violence and war, poverty and hate. Her study of the Mayan prophecies inspired her to tell the world about the opportunity and challenges we face today. Sandra resides in San Clemente, California and is the mother of three and grandmother of five.