The State of Grace:

A Mother’s plea for life balance 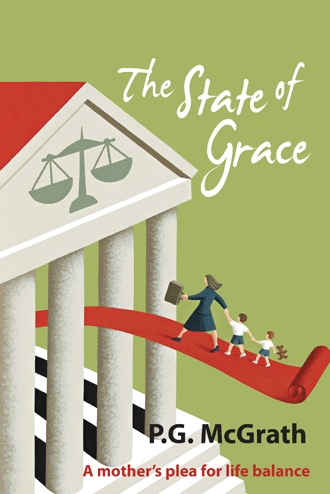 Some might say it’s not terribly wise to spend the weekend with an old flame the day you are serving your husband a divorce petition but I disagree.

I looked up, away from the piece of luggage I was gripping like a security blanket and right at him, “this morning.”

He tossed his head back laughing – hard. Okay, as I write this and reflect a bit it was very funny. Until yesterday we had not seen each other in six or seven years. Yes, we spoke. We sent Christmas cards, the annual ‘how are you’ call. Suddenly, here I was coming through his door, and before I could answer ‘how are you’, I announce I served my husband with a petition for divorce - this morning. Papers served while I was en route to the airport to get here. File and fly.

It was the expression on his face and the way he was laughing. The way only your former lover can laugh. A look that is a combination of sheer amusement and genuine affection all rolled into one. There is something very comforting about all of it – his warmth, his apartment, his humor. The past few months the current has completely challenged me and now I have managed to swim into this fabulous piece of warm water. I slow down. I breathe easier. I have been walking on eggshells for months. It’s okay, I am at Pablo’s and he is grinning. Suddenly, I recall he always found me so amusing, that crazy chica Americana.

Pablo is twenty years my senior and probably because of this I take comfort in that look on his face of amused affection as he listens to me. Our age difference is another aspect of our relationship that has become more beautiful with time. I have discovered every woman should have an ex who is twenty years her senior because should she find herself single years after being married, she will be older, but she still is twenty years younger than him. This is a beautiful thing.

When going through a divorce there is great comfort in experiencing the fun that comes from being with a man. By the time one divorces, it has been a long time since you have experienced such fun. However, it can’t be any man, since you are getting a divorce and meeting someone new is time consuming. You can’t let your guard down; you have to get to know the new person. This takes energy, an investment of time; yes time – the western world’s most phenomenally precious commodity. You are painfully and literally aware of this, because you know how much your lawyer charges for her time. However, when spending time with someone who already knows you, who knows you speak too quickly, like the beach and would die if forced to move to the suburb - this is comfort. This must go in my divorce survival action plan. Spend weekend you serve spouse with an old flame – preferably a Latin for extra warmth. If nothing else, you catch-up with an old friend and finally stop dwelling on wondering why people believe marriage can work at all.

Anyway, he knew. I told him a few weeks back when we scheduled this weekend. There was the usual small talk - my boys were fine, and, yes, I was still lecturing to US university business students. Yes, it was very different from my days in New York practicing law. Classes were fine and then he asked how I was.

He paused, and then sighed, ”I’m sorry to hear that.” Then there was a long pause broken by, “So when are you coming to Madrid?”

I suggested a date. No pause on my part. Hell, if it weren’t for my boys, ages 2 and 5, I would have asked him what he was doing for breakfast. The suggested day arrived soon enough and here I am. Safe, in Madrid, at Pablo’s while my soon to be ex-husband and boys were in London.

I moved my bags from the front door into the apartment. Pablo looked them up and down and then at me.

“No, I ‘m not moving in. It’s just that I couldn’t think while I was packing so I packed everything.”

He nodded his head and smiled. I sat down on the sofa; I noticed he had bought a new, or perhaps now not so new, piece of art for the big wall in the living room. I know if he has bought it, it’s something noteworthy. I wonder what happened to the other piece that used to sit on that wall. We talked.

He brought me a glass of water and told me to take a sip from time to time. I told him enough about what is happening. Pablo is a well-known journalist and while many people might be put off by having a drama told so quickly he is not. I am lucky because he has built his life around listening to other people’s stories and dramas. This is a man who, when Spain was on the verge of revolution in 1981, found a camera and the King to broadcast the now famous historical speech in which King Juan Carlos denounced the coup attempt and declared his support for the Spanish constitution. This is a man who saved Spain. After saving Spain from fascism his brief role in my melodrama will be easy for him.

Grace Purdy, mother of two and part-time business professor, is facing a crisis in both her marital and professional life. As an expatriate American living in London, she is doing her best to survive a divorce—both physically and financially—all while navigating the English legal system.

Grace spends her days working on her legal case while running between business lectures and collecting her sons from the school bus. Her soon to be ex-husband won't take any money out of his business, leaving Grace to pay the bills. Additionally, she has given up having child care so she can pay for a lawyer in her battle to keep the marital home.

During Grace's journey she confronts the predicament of so many other mothers who have learned that no matter how much they give or "lean in" now it can be unbelievably challenging not to feel exhausted and broken.

Throughout her journey Grace uses her sharp wit and humor to navigate around any obstacles she encounters.

Dr. P.G. McGrath's memoir is the story of a woman, mother, university lecturer and an expatriate facing a crisis in both her martial and professional life. Her story provides a firsthand account of the challenges of single parenthood and navigating the legal system.

Dr. McGrath holds a B.A. from American University in Washington, DC. She also holds a doctorate in jurisprudence from Fordham University School of Law. She has written and lectured in her professional career on the subjects of women and business as well as corporate ethics. She has taught for Fordham University, Syracuse University, and various other US and UK universities. Prior to a career in academia, she practiced law in New York for a well-known Chicago based law firm as well as working for a Fortune 100 Company.

Before settling in London with her two young sons she resided in France and Spain. Dr. McGrath wishes all single mothers could get more help without struggle. She also now knows the first step to divorce is always marriage.