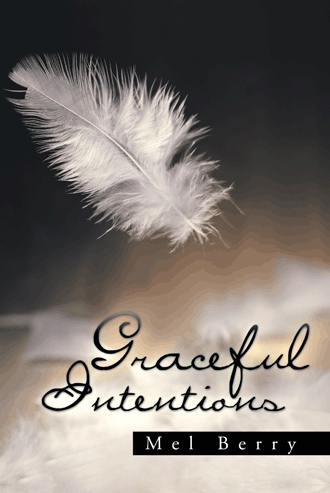 Chapter One
“Gracie! Don’t!”
He pleaded, softly, cautiously.
His proximity to me was close. Almost like his voice was coming from inside of me, as if he was a part of me. I was positive I had never heard this voice before, but it sounded safe, stunning and somehow familiar. The awareness of it left me mystified. The love and anguish in his voice caressed my mind and soul. It consumed me in those two little words - it was demanding, devouring and the anguish in his voice dazed me.

“Gracie!”
He was in full panic now. I instantly buckled under the weight of his fear which radiated from him. It startled me out of the haze I had been lost in. I looked in front of me and then down. Down past the jagged rocks that would surely cut me into diced, bite sized pieces for the wildlife to consume. Down past the razor sharp bushes, that would eventually be decorated with my bones. Down to the rushing rapids that, should I survive the rocks, bushes and the 100m drop, would engulf me in an ever churning whitewash. They would continually persist, until I was well and truly deceased. I was being pulled in both directions. Half of me felt like I needed to jump, not caring about what happened afterwards. Not caring that it would be painful for my family or friends. Not caring that it would no doubt be an agonizing and prolonged death. Something was tempting me to jump and I could not understand why. I had never been suicidal before, I loved my life and my family. But this feeling was unrelenting and hard to fight.

“Gracie! Please!”
The whisper was there again, so near, so real, so desperate. His voice was aching in such a way that I felt his pain shoot through every fiber of my being. The other half of me (his half) was screaming almost begging me to move back, to step away from the impending death. Was I going crazy? The pull towards the cliff edge grabbed hold of me again and I was paralyzed. It was over powering. And as the dark emotions crept forward in my mind and I was about to take that fatal step, his voice caressed me again.

“Gracie, I need you!” his begging pierced me and the veracity that I shared his emotions stunned and bewildered me. I felt every sentiment along with him, they burned within. I couldn’t explain it – the longing, the yearning, the hunger all of it and so much more, there were no words to describe it. The magnitude of reactions flashed through me – adoration, an innate desire, sadness, regret, but most of all pain.  There was a devastating agony in his voice that caused a sob break out from deep inside my chest. I was overwhelmed and it suppressed the urge to jump, I took a breath and held onto it to focus on my options and their consequences. The pain would be worse than losing him. Losing me would destroy him.

This reality flooded through me as I understood that if I were to perish, then he would too. My family would go on and my friends would forget, but not him, he would not survive this. And I could not allow that. I could not lose him - not now. The thought of him not living was more painful than losing him. I didn’t even know this mystery voice, but the chance to lose what I didn’t have was a chance I could not risk. Finally I felt the determination spread through me like the ever churning rapids of the river below. It would be hard, but together we would survive, he needed me as much as I needed him. And like a message from upstairs the sun suddenly broke through the cloud drenched sky. The cloud cover was so dark and dense it gave the illusion of early evening, instead of the middle of the day. Only one tiny little sliver of light flooded through and surrounded me like a spotlight, a spotlight full of love, understanding and warmth. A spotlight that seemed to radiate a certainty to fight for everything I desired – with everything I had.

Finally the risks hit me and I slowly took a step backwards – towards safety. Don’t get me wrong - it was difficult, like swimming against a current, but I forced myself to ignore the urge to move towards death and focused on the pull of the voice and the warmth of his love. After one step, I made another and another until I backed into his body. I allowed his warm frame to support my weight as I slumped down into a ball, curling my legs to my chest and holding them in place as though – without the grasp I would get up and run towards the cliff edge again. And this time I would not stop, I would throw myself to the gruesome death that was awaiting me. The warmth of the sun slowly faded as my spotlight savior returned to the heavens. I was so self-absorbed I didn’t realise I was shaking until his body moved around in front of me, blocking the cliff’s edge. All of a sudden I was in an unbreakable, yet comforting and loving embrace.

“Gracie.” He whispered gently, his voice full of relief and hope. Hope for what though? A future? A shiver ran down my spine at the idea. The relief in his voice was sobering. The embrace sent a feeling of fire and unending love throughout my body. I relaxed into his hold and allowed his presence to engulf the remaining need to end my life. It felt safe here, it felt like home. But not the home I shared with my parents and sister, a new home that would be my forever, my happily ever after.

“Gracie.” He whispered again, the passion in his voice was intense. “I love you.” It was all but a whisper, but there was a certainty about it that made my heart swell. His voice was fading, though the embrace never faltered. I had no image of him in my head - I needed to attach a face to this perfect voice. I lifted my head from my arms and looked into the face of…

Despite having grown up in a loving family, seventeen-year-old Grace always felt different. When a car accident causes her to hear a voice filled with love and longing, she embarks on a journey of discovering how different she really is. Even before she meets him in person, Grace is inexplicably—but irresistibly—drawn to Luke, a new guy in town who is somehow able to communicate with not only her thoughts but her heart.

Just as she is recovering from the accident and getting to know Luke better, Grace’s parents reveal the real circumstances of her birth, causing Grace to question everything about her life. More revelations come to light when Luke explains that the two of them have been Tutelary Guides in previous lives. Tutelary Guides are given to some humans; some are good, while others are evil. Although Grace has always been a good guide, Luke has had to struggle to overcome his wicked nature. Despite their differences, Grace and Luke fell in love while assigned to the same human four hundred years ago. They were discovered and granted human lives—lives in which they have reunited, only to be destroyed by Darcia, Luke’s former leader.

Reunited once again, this time against the dramatically beautiful landscape of Montana, Grace and Luke must work together to defeat Darcia and the forces she has sent to destroy them as part of her plan to take over the world. But can Luke stay strong enough not to revert to his former nature, and is their love solid enough to overcome evil?

Mel Berry is a happily married mother of five children who began writing as a form of therapy, but found that it quickly developed into a passion. She currently lives in Australia.