THE KAHUNA AND I 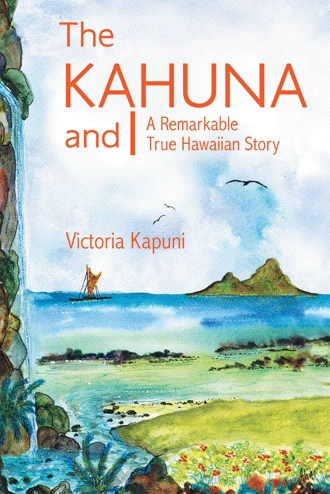 How does as a prim and proper private school educated, well bread young woman with music, ballet and ballroom dancing lessons, appropriately pedigreed as a DAR, and debutant at the Philadelphia June Ball, find herself in Kaunakakai, Molokai, Hawaii married to an almost full blooded ali’i Hawaiian who had been ‘raised up’ in a grass shack on the beaches of Oahu, diving off cliffs, living off the ocean, warding off environmental offenders as a activist protecting his lands and guarding the sacred ways of his people. This is our true story.

An heroic and uplifting spiritual adventure of a woman enduring great personal storms, overcoming her tragedies, awakening and accepting her gifts and discovering her one true love in the autumn of her life.

I was dyslexic, a Healer, athletic, and dearly loved my Dad. At an early age, within a three year period, I lost my grandmother and father. I lost my innocence and idealism with my first alcoholic husband. I faced fear and life threatening situations like repelling off cliffs and near drowning while running rivers with my abusive, adrenalin junkie, second husband. During that time; however, I reconnected with Nature having been first introduced to it by my grandmother when I was very young.

After my first visit to Hawaii in l981, I developed a gift of dream prophesy and became strongly re-connected to Native American Cultures, having first become involved in them while teaching pottery at a university. Soon after marrying a third time, I moved to New Mexico, where I made quantum spiritual growth through guidance from an unusual connection with a Zuni Medicine Man in the work I began to do making ‘spirit vessels’ from clay.

I then lost my son, grandson, and mother, divorced a third time, bought a one way ticket to Hawaii and was blessed to find my forth husband, a Hawaiian Kahuna, who healed me. He was a direct decendent of Kamahameha III (great-great-great grandson). He had been a political activist, dive master, and wood carving artist, who became the very first Hawaiian artist whose 15 works have been acquired by the Smithsonian Institute for their collection. His largest sculpture, as co-creator with an international Spanish artist, is called Soul of the World and can be found on the internet. It is an international global art project honoring Mother Earth in sacred geometry located on his leased land from the Hawaiian Trust. On one of our travels, we dedicated one of the eight points of Soul of the World in South Island, New Zealand.

During our married life together, we endured his three hospitalizations for kidney failure,
with the loss of six pints of blood each time and experienced several miraculous healings; as well as a ‘Melagro Bean Field’ like war with a Singapore global conglomerate, that wanted to develop 200 beachfront acre lots on the pristine shores of Molokai for millionaires, that would change the traditional lifestyle of subsistence living on this 7,300 native populated last Hawaiian island.

My husband died in his bed at home on a day of his choosing with me by his side. We celebrated the life of this remarkable Hawaiian for five hours. He was the last of a kind—an extraordinary artist and activist with over 300 in attendance for a luau. The canoe carvers from New Zealand (having carved him playing his pahu on their canoe) dedicated their canoe that year to him at the Maui Canoe Festival and traveled across the channel to attend his services at our home.

The Kahuna and I were from two different cultures and searched out ways to blend them through our mutual respect and love for one another like in the movie “The King and I”. We wove a rich fabric of diverse colors together in our marriage teaching others that race is not important when there is love and understanding between people. I had to come face to face with harassment, racism, shunning, and blindness as I struggled, without him as my protector, to stay on the homestead, that I had built for him.

Although I will eventually need to move from our home as I have no Hawaiian blood, the five acres on which Soul of the World is located, is of paramount importance to me, because of the Hawaiian cultural sacredness on that land. After a fire of 8,000 acres burned through the Island and his lot, the golden pyramid was unscathed with not so much as a smudge on it. The Trustees of the Hawaiian Lands maybe willing to take an unprecedented position to save the Soul of the World and the Sacredness of the surrounding land, by pulling back the lease into Inventory and never leasing it out again.

How does a Philadelphia debutant, refined in manners of high society, overcome great personal storms, follow her spiritual path, and find the love of her life (the great, great, great grandson of King Kamehameha III) in Molokai, Hawaii? He knew her spirit even if he could hardly speak her language and had been ‘raised up’ in a grass shack on the beaches of Oahu, diving off cliff s, living off the ocean, warding off environmental off enders as a political activist protecting the islands and guarding the ways of his people only as a Kahuna can. They wove a rich fabric of diverse colors throughout their marriage
by searching out ways to blend their two cultures through their mutual respect and love for one another. They shared and practiced their spiritual knowledge, lived a traditional Hawaiian lifestyle and fought off , like in a “Melagro Bean Field War,” a Singapore global conglomerate that wanted to develop 200 pristine acres of shoreline that would change the subsistence way of living on this small Hawaiian island. This is their true Hawaiian story.

Victoria felt compelled to write this book and pass on her healing and spiritual knowledge to others so that their awakening and discovering of their spiritual paths might be a little easier.
Prior to attending Law School, Victoria taught pottery at the University of Wyoming. After retiring from the practice of Law, she returned to clay; selling her art pieces at shows and several galleries throughout four states. After her first visit to Hawaii in 1981, her goal was to retire in Hawaii where she presently resides with her two German Shepards: Hoku and Loke.