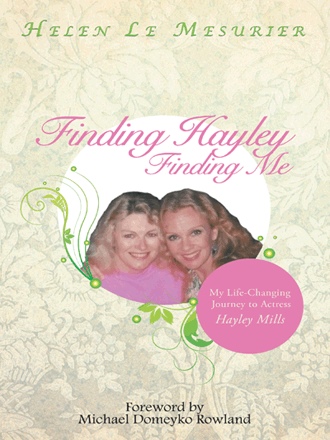 From the moment young Australian teenager Helen Le Mesurier saw Hayley Mills in Walt Disney’s Pollyanna, she felt a deep, intense connection that defied explanation. For years, Helen collected every photo, every article, every scrap of information she could find about the beautiful, young, English actress. Her sense of connection to the star was legendary among her friends and family.

Thirty years after she first saw Hayley on screen a rare opportunity presented itself— and, with her sense of connection still very real, Helen was determined not to let the chance to finally meet the star pass. With newfound boldness and conviction, she made her lifelong dream come true. Meeting Hayley changed her life forever. As both women came to understand the true nature of their strong connection, Helen had an epiphany that inspired an intense journey of self-discovery and spiritual growth, one that has made her new career as a life coach and seminar presenter possible today. It was as a result of her life-changing journey to Hayley that she was propelled into starting her own personal empowerment business, Seeing Life Differently, through which she now helps others realize their goals and actualize their potential.

Helen’s story is proof that dreams can indeed come true!

Helen Le Mesurier has been a metaphysical teacher in Australia since 2001. She holds certifications from Michael Rowland’s master training in self-development, personal empowerment, and classical meditation and is a graduate life-coach from The Coaching Institute, Melbourne. Helen offers seminars, workshops, and private consultations through her personal empowerment business, Seeing Life Differently.