and other tips to prevent deadly and costly medication errors 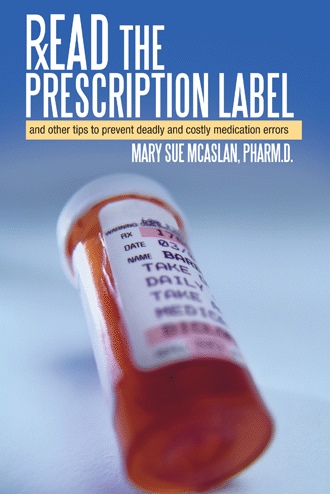 Imagine that you are reading the newspaper on Monday morning and the headline reads, “Fully Loaded Jumbo Jet Crashes with 200 Passengers on Board. All Are Dead.” Then imagine that you are reading the newspaper on Wednesday morning and the headline again reads, “Fully Loaded Jumbo Jet Crashes with 200 Passengers on Board. All Are Dead.” Imagine that this headline repeats every other day of every week of every year!
How long do you think it would take the airline industry to respond to catastrophes of this magnitude?
How long before you stopped flying?
How long before Congress would hold hearings on airline safety?
How long would you put up with this?
In 1999, the Institute of Medicine (IOM) published a report called “To Err Is Human: Building a Safer Health System.”(1) In this report, the IOM identified a very large and serious problem―that doctors, pharmacists, nurses, and other health-care providers were making mistakes. The IOM report estimated that medical mistakes were killing nearly ninety-eight thousand people every year, or the equivalent of three fully loaded jumbo jets crashing every other day.
The 1999 IOM report caused a big stir in the media. All the major news networks covered it extensively: CNN, the LA Times, and others. The report called for a 50 percent reduction in medical errors in the next five years. As a result, a federal task force examined medical errors and confirmed the IOM’s findings. The report also recommended that there should be a national focus to increase patient safety, develop a mandatory national reporting system for medical errors, raise performance standards for safety, and implement safety systems—especially for the delivery of medications.
However, once the initial outrage from the IOM report faded, the media and the government moved on to other issues. In 2004, five years after the initial report, no major changes in medical error reporting had occurred and other changes in our health-care system remained “frustratingly slow.”(2)
In May 2009, ten years after the release of the initial IOM report, the Consumer’s Union (CU) released a follow-up report. This report was called, “To Err Is Human—To Delay Is Deadly. Ten Years Later, a Million Lives Lost, Billions of Dollars Wasted.” (3) What the Consumer’s Union found was that preventable medical harm still accounted for more than one hundred thousand deaths each year or a million lives over the past decade. Additionally, the CU noted that by all accounts this statistic was conservative. On creating a health-care system that was free of preventable medical harm, the Consumer’s Union gave the country a failing grade.
In addition to the cost in human life, medical mistakes cost billions in health-care dollars. The 1999 IOM report estimated that medical errors cost the United States $17–$29 billion every year.(4) Statistics related to medical mistakes are hard to measure and evaluate; however, the consensus appears to be that we are no safer today than we were ten years ago.

In 1999, the Institute of Medicine published its landmark report, “To Err Is Human: Building a Safer Health System,” in which it stated that nearly 98,000 people die needlessly every year due to preventable medical mistakes. In 2009, the Consumer’s Union published a report, “To Err Is Human—To Delay Is Deadly,” stating that we are no better off today than we were ten years ago and that a million lives have been lost and billions of dollars wasted due to medical mistakes. Enter Dr. Mary Sue McAslan, pharmacist and medication safety expert. With over thirty years’ experience, she provides clever, easy-to-follow safety tips for the average healthcare consumer. These simple tips will prevent serious medication errors from happening at the hospital, the doctor’s office, the pharmacy, and at home.

Dr. Mary Sue McAslan has led numerous quality improvement teams in large healthcare institutions and managed care organizations. She has appeared on network TV and local newspapers with consumer advice including “Go NUTS—Ask your pharmacist for help.”
Read the Prescription Label is a book for every person who takes prescription medications or cares for someone who does.
Visit her website at www.drmarysue.com— PRACTICAL ADVICE FOR SAFER HEALTHCARE or e-mail her at drmarysue@americasfamilypharmacist.com.