Pathways and Perspectives for More Peace and Tranquility in Life 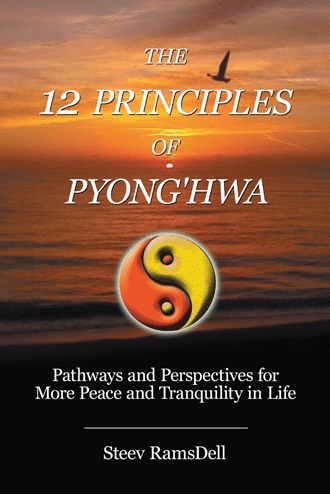 (Principle # 6 : You'll see it when you believe it. It is unstoppable when you know it!) Santa Claus and the Easter Bunny Santa Claus and the Easter Bunny are on a picnic one day. Under the shade of a large oak tree along the bank of a small river, they are enjoying sandwiches and sides, including some hard-boiled eggs that the Easter Bunny brought, of course. At one point, Santa starts to bite into one of the eggs, then stops. Instead of eating it, he tosses the egg into the river. The Easter Bunny is surprised and asks, “Why did you do that?” Santa replies, “Sad to say, but that one was rotten. No good.” The Easter Bunny then asks, “How do you know which are the good eggs and which are the bad eggs?” Santa Claus peers over the top his spectacles and says, “Really?” Is a child better off when he or she is told that there is no Santa Claus? Really? To this day, I still believe in Santa Claus . . . (Principle # 3: Nothing ever goes wrong. It is all part of a perfect plan!) Humankind's Fifteen Minutes Furthermore, among the zillions of unanswered questions about our universe, the one about whether any life out there will be "intelligent" is a good one. Consider this: For a large segment of the Earth's history of life, the dinosaurs "ruled". Yet, even with one-hundred-and-sixty-five-million years to accomplish something, not one used a cell phone, built a condo, flew an airplane, opened a casino, or even kept a diary! “Tuesday, July 17th, 112,655,411 – Laid an egg this morning. Hot and humid all day - what else is new? Around noon, the Bronts twins stopped by for some swamp juice, complained about the pterodactyl gang buzzing the little ones and dropping poop on everything - bunch of lowlifes...” To me, the facts are amazing and puzzling. Why did their brains not evolve? They had 165 million years to get smarter. We've gone from the GEICO caveman to Bill Gates and Stephen Hawking in a tiny fraction of that time. Talk about your slow learners! Now, let's imagine that some other intelligent, advanced, race is out exploring the universe and takes a little side trip in our direction (OK, big side trip). Suppose that this takes place about 100 million years ago. What would they find when they arrived on Earth? T-Rex stomping and Apatosaurus chomping. Perhaps an interesting visit, but not much point in trying to communicate or establish relations. Well, maybe they could check back later. A hundred-thousand years go by and another UFO stops by to see how things have progressed. Alas, no change. So, they mark their to-do calendar to take another look in, let's say, one million years. That day comes, they arrive and find . . . same old, same old. They could keep checking every few million years, but what's the point? For a very long amount of time, the Earth had little to offer in the way of intelligent life. And the amazing thing is that this very long amount of time was just a small fraction of time in the history of the universe, and even in the history of the Earth. To get a better grasp of the magnitude of this mystery, imagine the entire history of the Earth compressed to a timeline of one year. If we accept the best estimates of this day, we see some pretty amazing numbers. The Earth formed about 4.5 billion years ago. That's January 1st. We get to about April 1st before the most basic forms of life appear. Being all-knowing, did the Creator think it was funny that we'd later celebrate that date as April Fool's Day? Deep humor. In any case, the months pass by, but not too much happened in respect to life as we think of it. We have to go all the way to December before seeing the development of more complex lifeforms. Around the 11th of December, the dinosaurs begin their reign, which lasts as we said, about 165 million years, or until around Christmas Day. Notably, the Great Creator gave us another gift that morning, directing the Colorado River to begin the gradual process of slicing out the Grand Canyon. So, what happened to the Dinosaurs? It is generally believed that the dinosaurs disappeared, rather suddenly. However, there is some disagreement among the experts as to what caused their extinction. An environment-killer meteor? Disease? Or, could these sly dino-dogs have been smarter than we think they were? After 164,999,999 years did they decide to pack it in and leave the planet? Did they build spaceships and take off for another world? Nah, probably not. In any case, it was not until the last day of the year, with only one hour left, that the first hominids appear on the Earth. Then, at no more than five minutes before midnight, we see the beginnings of civilization. The birth of Christ, on this time scale, occurred just over a minute ago. July 4th 1776 was about five or six seconds ago. And the age of real magic, the last 50 years, has taken place just about three-tenths of a second before the end of the year. If you live to be 150 years old, your long life will comprise about one second of the Earth's year of history. Kind of knocks the importance of our daily struggles down a little bit, doesn't it?

Pyong’hwa translates to English as peace and tranquility. The 12 Principles bring new understandings and enlightenments to ease life’s journey and to serve as a powerful yet comforting guide for every day and every moment of your experiences going forward.

A fun, entertaining and easy read, each Principle is presented with memorable combinations of humor, insight, personal narratives and the collected wisdom of the ages. There are over 250 quotations of valuable perspectives, including everyone from Einstein, Disney, Gandhi, Shakespeare, Franklin, Lincoln, Kennedy and Mother Teresa, to Nin, Dyer, Forbes, Emerson, Aristophanes, Maher, and many more. Plus Zen, Buddhist, and Scottish proverbs, biblical citations, and original creations, including a direct quote from the Almighty, “Here you go: Life! Let’s see what you do with it.”

In an increasingly complex, fast-changing and emotionally challenging world, pathways and perspectives for more peace and tranquility are needed more than ever. This book will guide you along a path that will bring you to the yin of greater optimism, inner calm, appreciation and understanding, while providing the yang of new opportunity to create and realize your own joyful being!

“I’ve paid attention,” the author explains. By listening, reading, watching and learning through a wide variety of experiences, Steev RamsDell continues to discover a wealth of wisdom in the world. There are people from all walks of life, throughout the history of human endeavors, who discovered wonderful insights and valuable lessons. Adopting many of these enlightenments into a guide, has dramatically changed his life, in particular, creating more serenity and contentment, calm and confidence – which is a wonderful way to live fully in every moment.

Steev is very much at home living in South Florida with his wife, Seung Me, and stepdaughter, Nicole. They have a small business, and Steev continues to enjoy a variety of writing opportunities, including most recently, the political and social commentary blog, 12principlesofpyonghwa.com. Among many joys in his life, Steev is grateful for motorcycles, movies, dogs, nature, the ability to play sports – especially jai alai – and most of all, family, and good friends.