The Kindness Ambassador and the Sugarholic Prosecutor

13 Keys to Living the Life You are Meant to Love 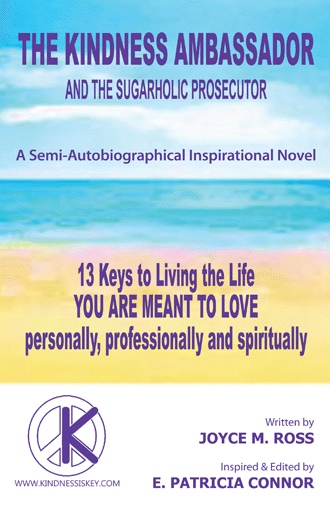 THE KINDNESS AMBASSADOR
AND THE SUGARHOLIC PROSECUTOR

“Are you referring to Terry’s battle with colon cancer?” she softly asked, her heart aching for him.

“Not just Terry. Cancer also took out my grandmother. All over the globe kids are starving to death.” He wiped his mouth before crumpling his napkin and tossing it on the table. “The news is filled with stories about people killing each other because of territorial claims or differing religious beliefs. How can anyone believe in a loving Creator?”

“What do you believe in?” Joycelynn asked, ignoring his contemptuous tone and expression. Having just lost his best friend, it was understandable that Brandon was angry with Creation.

“My parents are devout churchgoers. When I was young, there was a lot of talk about Judgment Day and fearing God. Not my favorite topics.”

“Don’t you wonder about your soul’s origin or life after death?” she asked, leaning forward and resting her forearms on the table.

“Nope! I think that we’re born and then we die.”

Brandon’s cynical atheism didn’t jibe with Dee’s depiction of him as a holy godsend, whose quick laughter and attentive care made her brother’s last days happier. “If you don’t believe in a divinely intentioned universe, then what do you imagine motivates one person toward healing and kindness, and another toward hurting and criminality?”

“Free will, I guess.” He grimaced, as though mentally berating himself for making a religious reference. “What I meant to say is that some people are flawed from birth. Perhaps some criminality is due to poor parenting, though that’s debatable.” Arms crossed, jaw jutted, he glowered at her.

More amused than intimated by his assertive body language, she clamped her arms one over the other and glared back at him. “I can agree with your unfortunate parenting observation.”

“At least we agree on something,” he returned with a smirk.

Sitting upright, Joycelynn unlocked her arms. “When I was younger, I worked at Victoria’s Youth Detention Center. Kids came in for everything from theft to murder. Many of them were raised in families where physical, emotional or sexual abuse was a common occurrence. Several of their parents were alcoholics or drug addicts.”

Brandon’s open palm jerked traffic cop forward. “If you’re selling the it’s-the-parents’-fault ideology, I’m not buying. There are many law abiding citizens who come from truly outrageous homes. Once we hit eighteen, we make our own choices.”

“Choices with their roots in various advantages and disadvantages,” she returned. “I can’t imagine a psychopath being the byproduct of truly loving parents.”

“Unless he or she was born mentally ill,” he argued.

“That’s true. People come into this world in all kinds of circumstances. Some are born into loving homes in fruitful nations; others into countries so poor that parenting takes a backseat to providing basic necessities. Some children are born healthy and others disabled.” Saddened as she glanced out the window and saw that the puppy and boy were gone, she finished by asking, “Why do you think that is?”

“Why do I think what is?” Brandon’s gaze drifted toward where Joycelynn had glanced, then back at her.

“Why do you think each person in this world is so unique? When you consider the various defining realms—physical, emotional, intellectual, spiritual, social, economic and political—humans are as varied as they are plentiful.”

“You’ve obviously thought about it more than I have. You tell me!”

“I’m talking about spirituality, not religion.”

“Not really, though they are married through belief in a higher power.”

“You can rest all you want, but spirituality isn’t a particular dogma. It’s about the spirit-self’s individual relationship with our originating Source. What we teach in our Kindness is Key courses is that when you live in harmony within—mind, heart and soul—you’re aligned with your intended purpose-path, and will naturally prosper financially, spiritually and personally. That’s not religion. It’s common sense.”

Glee shadowed with apprehension flashed across his face before he said, “You might have misread your own purpose-path. With your debating skills, you’d be a fantastic lawyer.”

“Thanks…I think.” Joycelynn blushed. She wanted to help him deal with his loss by exploring the possibility of a divine rationale for human suffering. Brandon, however, seemed stuck in the thrill of courtroom style deliberation. “I’m beginning to wonder if I’m just wasting my time and yours by going on about my spiritual beliefs,” she confessed, sounding more irritated than intended. 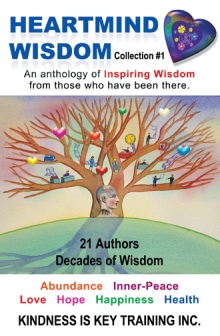 “A warm engaging novel, rich in messages of love, forgiveness, joy, and kindness.”
—Ted Kuntz: Psychotherapist, Inspirational Speaker and Author of Peace Begins with Me. www.peacebeginswithme.ca

“A refreshing and inspiring read! Although heartrending at times, you will laugh and wonder as you see that by reaching outward, inward and upward—releasing shame, doubt and fear—love and prosperity are what boomerang back.”
—Taslim Jaffer: Speaker and Author of Let ME Out! Blog. www.letmeoutcreative.com

“I wish this book were available when I hit ‘Brock bottom’ at age twenty-three. I’d have tucked it in my knapsack during my ten thousand mile bicycle tour seeding kindness across North America.”
—Brock Tully: Kindness Ambassador, Speaker and Founder of the World Kindness Concert. www.brocktully.com

The Heartmind Wisdom Inspirational Anthology Collection is available at
www.kiklibrary.com, bookstore.balboapress.com and amazon.com.

Direct Sales Be Better Than Good-Be GREAT! is available at www.kiklibrary.com and amazon.com.

Joyce M. Ross and E. Patricia Connor are the co-founders of Kindness is Key (KiK) Training Inc.: Home of the Heartmind Wisdom Anthology Collection and the Annual Guinness World Records ‘Largest Human Peace Sign’ Concert. The Kindness Ambassador is an inspirational novel about Joyce’s recovery from a gambling addiction and Patricia’s journey away from depression. Close friends for over thirty years, they now teach and write about the wisdoms that healed each of them personally, professionally and spiritually. Their hope is that through exploring the 13 Kindness Keys you will begin living the LIFE YOU ARE MEANT TO LOVE.