How to Interpret and Change Your Body 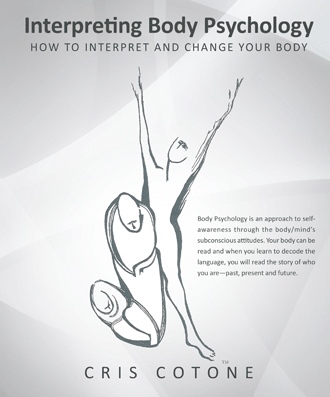 In 1949 Moshe Feldenkrais published a classical description and explanation of the body-mind in his book, Body and Mature Behavior, in terms of learning, posture, and the effect of gravity, anxiety, and affecting change in the body-mind. He saw the uniqueness of human learning in the growth process of the brain and the nervous system. The body's flexor contraction and extensor inhibition was what Feldenkrais described as the inborn “fear of falling.”

This is a locked-in mental process held by the contracted muscles that literally don't release. The event, therefore, is not fully expressed so it is not complete. This is what I call the “incomplete conversation,” because the unexpressed emotion is literally trapped in the body and causes repeated patterns until the muscle tension is released, and the body is more in alignment with gravity. An example would be when you cry and you force yourself to stop crying, you will have a body response. Your sinuses get blocked, your jaw, throat and chest muscles get tight, and your breathing becomes shallow. You start shutting down because you're stopping it. This takes energy to control the non expression, and that was what Freud was saying, when he realized how a vast amount of energy is being used to suppress the expression.

The way this process can be interrupted is to change the body's neuromuscular system and its orientation to gravity. This can be done through emotional release work and body work therapies that deeply massage, manipulate, and loosen the muscles. Freeing up the body's muscles allows the flow of energy through the body, freeing it of old ideas and patterns, allowing more flexibility and increasing the range of movement.

We continue to relive and experience both physically and emotionally painful events from our past. By the time we are adults, we have lost our capacity to respond to what is going on in the present because we are responding to the present through reactions from the past. With the knowledge from Interpreting Body Psychology, you will have a deeper understanding of patterns and tensions held in the body from past experiences; you will see the link between your subconscious thoughts and your physical structure. You will learn transforming techniques you can easily incorporate into your daily routine that can change your life. www.criscotone.com

As the former owner of The Institute of Psycho-Structural Balancing (“IPSB”) in Beverly Hills, California, and the owner of Healing Touch Massage Therapy in Fountain Hills, Arizona, Cris Cotone is a master in integrating a variety of healing systems which best serve the needs of people in making physical changes in their bodies and in their lives. Cris has studied the various writings and practices of leading practitioners in the field of bodywork. Among those have been the work of Wilhelm Reich, Ida Rolf, Moshe Feldenkrais and Ken Dychtwald. After 35 years of applied practice and observation, Cris has become an expert in her work in the areas of Body Psychology, Pattern Release and Etheric Healing. Hundreds of people have found their lives changed by studying and working with Cris in one or more of these areas.

While in California, Cris worked as a physical therapist and then taught other physical therapists in that office the energy work she had developed. Additionally, starting in 1992, Cris was listed for four years in Who's Who of American Inventors for inventing an innovative, state-of-the-art table massager designed to relieve sciatica and neck pain. In Cris' own words,

While at IPSB, one of the subjects taught was Body Psychology. The first time I had a body “reading,” I was amazed at the insight of how connected our bodies are with our subconscious mind's beliefs. I never dreamed my body could tell my life's story. Body Psychology introduced me to myself; my body was the “Informant” of my life.

I wondered how this could be possible. How could my body be so expressive of my inner self? How could my life's history be seen in the way my muscles were shaped? Fixed muscular patterns in the body are central to a person's way of being in the world. The body says things about one's emotional history and deepest feelings, character and personality. The staggering of a drunk and the light graceful walk of a dancer tells who they are in their movement through life.

The more I learned, I questioned whether the body created the mind or the mind created the body? This was a personal transformation and changed my life. After 35 years I became an expert by exploring, observing, and teaching “Interpreting Body Psychology.”

Cris lives in Scottsdale, Arizona, with her cat, Spot.