Bridge of the Gods

A Handbook for Ascending Humanity ~ The Golden pathway to your Highest God Self! 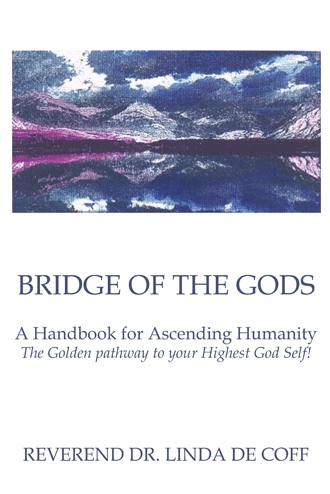 EXCERPTS   BRIDGE OF THE GODS

“The Resurrection Principle is embodied in all of life. It is ever our hope of glory and new good to come; and our deep knowledge, that through this Principle, already resident in us, we may always experience radiant, new, and improved and risen conditions, right here on earth…”

“…All live in praise of this Divine Principle of Immortal Power. The birds sing God’s song of joyous victory every morning...all Kingdoms adore.”

“And we know that when we have rolled away the stone of appearances… we shall be like the pure Christ of radiant Light   transformed and transfigured   easily rolling away the stone, of yesterday in our lives.”

“We shall step forth luminous on our mountain peaks of eternity, and we shall know, that we have, indeed, resurrected ourselves for all our conditions shall be wholly transformed and renewed around us - perfectly mirroring the luster of our awakened consciousness.” Chapter Nine, “The Resurrection”, The Release of All Karma

“Soon, of ourselves, we shall certainly discover that the great secrets of the pyramids are written within us.  And the temple of man is nothing less than the Temple of the Living God.”  Chapter One, “The Awakening”, Discovering the Bliss of your true Divine Reality.

The Twelve Chapters take the reader on an awesome Soul-perfecting journey throughout the many mansions {the chakras} to the crown summit of bliss and attainment, leading the individual all the way from  ;The Awakening ; into  ;The Promised Land; major fulfillment of heart’s desires.

Conscious conversion techniques for mental, emotional, physical and spiritual evolution are given   putting forth Divine options for greater success and achievement in any matter.

CHAPTER ONE: THE AWAKENING   DISCOVERING THE BLISS OF YOUR TRUE DIVINE REALITY speaks of the next step in evolution, as the human race {the immortal Soul of humanity} rises into heirship to embrace its spiritual origins   realizing I and the Father are One I am in this earth, but not of it.  An opening meditation is given for releasing all past limited identification, and for expanding into Higher God Consciousness and into the next level of Divine awareness required for the establishing of a major goal. The individual s goal is to be achieved through the major sequential spiritual alchemical processes outlined in the ensuing chapters

CHAPTER TWO: THE LIBERATION speaks of the fundamental identity shift, necessary   ;I and the Father are One as the first step in aligning with and activating a world of limitless good in the life. What we are one with, we become. This is the phase of the healing and raising of the mind.

CHAPTER THREE: THE QUICKENING speaks of the awesome acceleration that now takes place, as the individual Soul experiences its greater unity with all that is. This is the place where miracles, synthesis and boundless joy begin to appear with frequency, and the individual releases lower emotions of fear, doubt and separation. Faith is restored.

CHAPTER FOUR: THE TRANSFORMATION   LIVING BY INTUITION AND THE DIVINE WORD offers the Higher way, where the Soul now lives by intuition and the Word of God in them   far transcendent of old habitual patterns. Now, the Soul is gaining confidence, and emancipating from outer sense-world pushes and pulls and limiting collective beliefs   individualizing, gaining strength and courage, listening to the still small voice within, and reclaiming Divine Birthright and Estate   ever open to the Divine influx and healing of the Higher Mind.

CHAPTER FIVE: THE TRANSCENDENCE   LETTING GO OF DEPENDENCY, ATTACHMENTS, APPROVAL AND CONTROL deals with releasing and converting negative emotional patterns that bind the Soul to limitation of bondage and repetition. New Divine Love and authority patterns and options of handling are given   to give firm re-orientation to the indomitable way of God   bringing out the power of the Christ within; as the feeling life is aligned, and true creative power is thus restored.

CHAPTER SIX: THE ELEVATION   SYNCHRONIZING WITH THE DIVINE speaks of the soaring state of mystical unity that now takes place, as the individual unwinds from negative thoughts, feelings, patterns and attachments. The awareness of all the omni-powers {omniscience, omnipresence, omni substance and omnipotence} of the Divine Self is now taking place. A method for meditative overviewing to discern where the individual Soul is now   in terms of evolutionary progress is provided, along with ways of unifying with Higher Divine Patterns.

CHAPTER SEVEN: THE REGENERATION OF THE DIVINE SELF   THE KINGDOM OF THE HOLY BREATH heralds the return, now, of the fully self-sufficient and self-regenerating Soul   buoyant within itself. Sacred breath techniques for re-charging, problem solving and maintaining intention, integrity and empowerment are presented. Ways to transcend old thresholds, commonly causing failure and giving up and dropping out of original buoyancy and faith, are given.

CHAPTER EIGHT: THE ULTIMATE EXPERIENCE begins the 2nd Volume at the highest state of timeless mystical unity. The greater the unity   the more awesome the demonstration. Ways of maintaining unity, even in the midst of the whatever are given. This is walking on the waters and the development of transcendent Master capacities, as a sense of Divine plan, purpose, order and unity with Causal Power returns.

CHAPTER NINE   THE RESURRECTION   THE RELEASING OF ALL KARMA speaks of the glories of the Resurrection Principle   manifest in all life   the root capacity to revitalize, restore any and all good, right from within, and independently of outer circumstances. This chapter concludes with a sublime meditation   causing healing and release of all past unwanted karma   a massive letting go and alignment with Highest Love   causing Soul victory, sufficient enough to resurrect any good, whatsoever.

CHAPTER TEN: THE RETURN OF THE DIVINE   THE ASCENSION INTO BLISS gives the new patterns of resurrected life on earth   on an individual and collective basis, when the Christ is walking the earth and activated within every being.

CHAPTER ELEVEN: THE RAISING OF THE GIFTS is a profoundly joyous chapter   enumerating all the transcendent powers and capacities that renew to the now fully transformed, liberated and ascended Soul   the Kingdom of Heaven on earth. A glorious meditation for raising Master capacities and the ability to accomplish transcendent demonstrations, any time at will, is given.

CHAPTER TWELVE: THE PROMISED LAND AND THE IMPERISHABLE CITY OF LIGHT {ESTABLISHING HEAVEN ON EARTH takes the reader into the new dimension of major fulfillment    ;in my Father s house where the individual experiences supreme unity with the major good desired. A far reaching meditation   leaving the old world and entering the Promised Land and receiving the glorious gift desired along with the crystallization of a vision of further good for the individuals on-goingness into bliss is provided. This concludes the evolution through the chakras and the mental, emotional, physical aligning of the Soul with God   any phase of which may be applied at any time to cause alignment.

The Reverend Dr. Linda De Coff is the noted founder of New Thought Institute of New York, and New Thought International, Inc. (an association of Global Centers for World Peace and Enlightenment). She is also the celebrated author of Divine Prosperity: Secrets to the Kingdom, Living the Miracle Consciousness, and Songs of Eternity: Contemplations, Meditations, & Treatments on the Word of God!

Dr. Linda has been honored at the United Nations and spoken on Universal Spirituality and Advanced Consciousness themes all over the world

For further information re: Dr. Linda and "Bridge of the Gods", go to

Currently, Dr. Linda has been selected as a finalist for the 2012 Authors Show annual publication, "50 Great Writers You Should Be Reading!" ~ for her stunning works on Higher Consciousness and the next step in spiritual evolution for the most beneficent advancement of all humanity!