Spiritual Values in the Workplace

The Soul of Success in the 21st Century 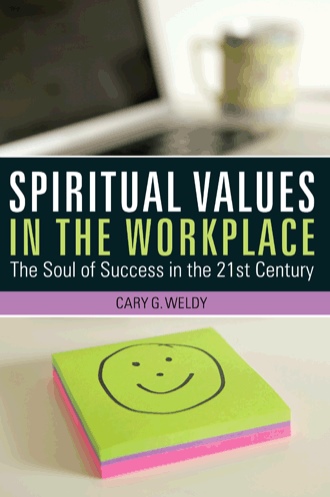 Chapter One Spiritual Evolution Corporate America has a reputation for being “dog eat dog,” lacking in spiritual values like generosity, caring, and compassion. During my years in the corporate world, I certainly witnessed a disconnect between the spiritual evolution on our planet and the narrow concerns of business interests. There is nothing inevitable about this state of affairs. Companies can behave with spiritual qualities in mind, and there are many examples of caring and responsibility taking place in the business world. But this trend represents a small portion of what businesses can do to take part in the evolution of consciousness now taking place worldwide. By seeing spirituality in every part of our lives, including our “business” mindset, we are really acknowledging that everything is intimately connected, and that we are part of that unity. Mahatma Gandhi used to say: “I believe in the essential unity of all that lives. Therefore, I believe that if one person gains spiritually, the whole world gains, and that if one person falls, the whole world falls to that extent.” In much of the same way, the whole will function in a manner that reflects how each individual behaves as a spiritual being. This book will focus on developing a spiritual culture in an organization, and more specifically, the individual within that organization. When the individual receives attention and is developed, the entire organization gains. What are spiritual values? While contemplating spirituality, religion may come to mind. Or others may think of mysticism. When I refer to spiritual values, they represent a set of values that transcend time and space. In other words, spiritual values apply to any setting, any time period, and any culture. The kingdom of God, as referred to in the Holy Bible, is the realm of spiritual values, those things that are most transcendent. The kingdom of God comes on earth not in some future apocalypse, but in the here and now of everyday life, when people help one another to realize their full potential. Abraham Maslow, considered by many to be the “father” of modern-day psychology, presented his model of the Hierarchy of Needs in the 1970s. The theory is often represented as a pyramid, with the lower needs represented by the lower levels, and the top point represented by the need for self-actualization. Each level is dependent on the previous level. That is, a person must have a need satisfied before moving to the next level. The five-tiered Hierarchy of Human Needs is as follows: 1. Physiological Needs (oxygen, food, water, shelter) 2. Safety Needs 3. Love, Affection and Belongingness Needs 4. Esteem Needs (self-respect, respect from others) 5. Self-Actualization Needs (to follow one’s calling) Many people, however, are not aware of his later work, in which he believed that the 5-level hierarchy did not stop. Rather, he believed that a sixth level was about self-transcendence, a trans-egoic level that emphasized visionary intuition, altruism, and unity consciousness. The identification of this sixth level transpired from his work in peak experiences and transpersonal psychology, recognizing the human need for ethics, creativity, compassion and spirituality. Maslow argued that without attention to this dimension in life, our organizations, institutions, and ultimately our society, would continue to generate ineffective policies and programs. The discussions throughout this book are in harmony with Maslow’s writings in the late 60’s and posthumously published work. Social thinker and Wharton School lecturer Jeremy Rifkin believes that a third industrial revolution is now underway that will lead to a planetary, biosphere consciousness, one characterized by greater empathy for other human beings and smarter solutions to the world’s energy needs. In The Empathic Civilization (Tarcher, 2009), Rifkin writes that the communications revolution that led to the creation of the internet was just the opening act of a larger drama that will shift people towards local food and energy production while opening themselves to others on an unprecedented scale. The fragmentation and alienation produced by free market capitalism will give way to a more sane and livable world, one dominated by the higher end of Maslow’s hierarchy. The impact of a single individual ripples outward to a whole organization, a whole society, or the whole world. Think of how different literature would be without William Shakespeare or Robert Frost. Think about how Mother Theresa made us all believe that sainthood was still possible, how she cared for the poor, dying, and destitute for decades. Think about how His Holiness the Dalai Lama persevered against all odds, despite the brutality of the Chinese regime. Our society is evolving towards inner work and inner movement of the individual. Doing things with our mind (at a higher level) is working with a finer level of energy. The finer levels of energy always affect and control the denser levels of energy, both in an individual and in society. So what begins as a thought in one person’s mind can change a whole epoch in human history. In 1897, who would have thought that a box would cook food without infrared heat or moving parts? And yet, the microwave exists, and food is cooked at the push of a button. Next, it will be with the ‘push’ of the mind, perhaps through biofeedback. Already implants and prostheses can be wired directly to the nervous system so that an amputee regains movement through an artificial limb or a deaf person hears again through cochlear implants. Technology and spirituality are coming together to bring us to a level of interconnection that has never been seen before in the history of civilization. Especially in tough economic times, the temptation for companies is to scale back programs designed to benefit their employees and contractors. This “race to the bottom” might be advantageous in the short-term, but it stunts the growth of the human capital needed to preserve innovation. Value placed on our most important resources—people—will pay the largest dividends in the long term.

From his energy-based approach to interior design and his appearances on HGTV, readers familiar with Cary Weldy will appreciate this new offering, in which Weldy speaks to the business community. Businesses have often run under the assumption that efficiency and productivity automatically equal success, measured solely in terms of profit. In this competitive paradigm, values must take second place, leading to the stereotype of the corporation as a soulless place. In this ground-breaking book, Cary Weldy moves beyond “synergy” to a model of business that focuses on the whole person. Take care of people, unleash their creativity, and innovation will follow. A new corporate mindset, one that is socially and environmentally conscious, now takes root around the world, leading to a better working environment, and, ultimately, a better world. Weldy takes readers on a journey through this change in consciousness, discussing the theory and the practice of bringing spiritual values into business.

The book discusses the spiritual evolution we are witnessing on the planet, and how it is affecting companies, both large and small. It discusses the importance of embodying spiritual values in a workplace setting, and how the profits will follow. A reader will learn how to move from fear to love, the power of simplicity, how to use intuition for guidance, and the importance of moving from goals into flow and process. Cary also discusses the challenges and importance of diversity, and a new paradigm for leadership, providing examples of the template for our new emerging leaders. Readers can also learn many practical ways that some companies are already doing to create a new workplace environment geared for truly taking care of its employees, including offering massage therapy services, meditation classes, and the use of aromatherapy to increase productivity.