“What You Managers Always Do To Us Workers” 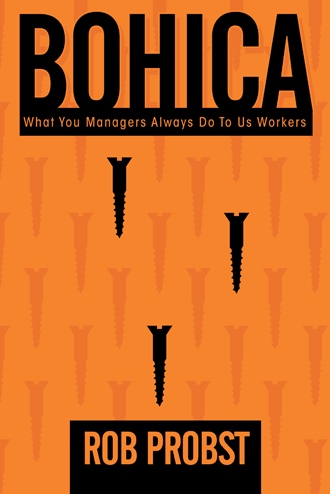 Matt jumped at the sound of the workshop door slamming against the wall as though it had swung open hard and fast enough for the handle to break the doorstop and penetrate the gypsum wallboard. He turned from the workbench to see Jim Champion, the Site manager, striding into the center of the workshop, fire in his eyes. Matt could feel his stomach muscles tighten. It was Friday and he’d hoped they might have made it through the week without any management dust-ups. He knew what to expect next.“Trevor get your ass down here!!!” Jim yelled as he glanced up the stairway tothe office window on the second level, overlooking the mechanical engineering workshop. The Venetian blinds opened slightly. Matt could see Trevor’s eyes, peekingthrough the gap to see his boss. He wondered why Trevor bothered. He knew what was in store.Jim looked back at Matt and commanded, “Matt! Get the rest of the engineers in here now!”Matt headed into the smoko room where the electricians and mechanical engineers were gathered for morning break. He gestured with a circular wrist motion to the guys at the table to follow him back into the workshop. They had heard the commotion and some looked afraid, others merely resigned to another tyrannical outpouring. Trevor was stumbling down the stairs, grasping for the hand rail when Matt walked back into the workshop. At one of the workbenches in the center of the room, Jim was tapping a two foot long piece of 50mm diameter stainless steel tubing tubing on the edge of the metal workbench as he waited for the men to assemble. Jim stopped tapping the tubing, hesitating. The workshop was silent. He raised the pipe and slammed it furiously into the top of the table and then raked the parts off the table top and onto the floor. Pieces of metal flew into the air. The sound of the crashing tube was painfully loud, the men stood motionless, frozen as the energy drained out of their legs. Trevor’s knees were visibly shaking when Matt looked at him. He wondered if Trevor was about to wet his pants. “This workshop is a pigsty!” Jim shouted. He looked up to see if there was any disagreement in the eyes of the trade staff. All of them were looking at the floor.“No wonder my brand new, $150 Million dollar powder drier is broken down again! Because you guys have no understanding of discipline, work standards, or ownership!”Matt looked up. For a split second, he was certain he recognized the hint of a smile on Jim’s lips, at the corner of his mouth. He shuddered, realizing that Jim was enjoying the tirade. ”The CEO didn’t ask the stockholders, the farmers, to shell out $150 million bucks so that it could sit around and look like a shiny Christmas ornament! And I didn’t promise Colin Gray that I would keep the plant running hard enough to surpass it’s design throughput specs because I wanted to be caught looking stupid! ” He paused for effect. “You guys are making me look bad. You are making the site and everyone that works here look bad, because you can’t keep the drier running longer that three days without a breakdown!” Jim paused again, his eyes moving from one man to the next and finishing with Trevor, whose gaze was also lowered to the floor. “We are supposed to be making powder yesterday, today, tomorrow and the day after tomorrow, but my operators tell me that the cyclones are blocking and you guys can’t get the rotary valves fixed to stop the blockages.”………… Trevor?!”Trevor jerked out of a frozen stupor. Drifting, trying to escape, mentally, Matt surmised. Now he had been caught off guard, perhaps he hadn’t heard what Jim had said, Things could get worse.“Trevor!!!? ……I’m talking to you!” Jim reiterated“Uh……er…….Jim. I’m so, so sorry “ Trevor replied. “Trevor you are sorry!” Jim paused again, letting the words sink in. “You are the sorriest excuse for a maintenance manager, for an engineer, for a human that I have seen!.” Jim cruelly eyed Trevor and his reaction. Trevor was melting into a shivering, blithering whimp as usual. “But Jim. It’s not just our fault. The operators aren’t following their SOP’s. They’re partly to blame for the blockages. Fifty percent of the downtime is caused by operator faults. Some of them aren’t even trained in the standard operating procedures.” Matt was surprised to hear Trevor challenge Jim. It was a pitiful attempt. Trevor’s stuttering showed a lack of resolve. “Well I don’t bloody give a rat’s ass Trevor!” Matt couldn’t hold back any longer. “He’s right Jim. And not only that, half of our breakdowns are a result of the crappy startup commissioning by the contract engineers and the substitution of sub-standard parts like the rotary valves.”Jim turned quickly to Matt’s challenge. His fingers tightened on the stainless tube. “Matt’s right. Jim. I told you that too.” Jim turned back to Trevor. “I want that drier back on line in an hour or I’m going to seriously start thinking about contracting out maintenance!” Jim looked around at all of them menacingly. Assuring himself all of the staff had received the impact of his threat. Only Matt looked him back in the eye. “Matt. I want to see you and Trevor in my office in an hour. I want a report on the actions you are taking to get back on line and stay on line.” “Okay Jim. We’ll get onto it. I’m sorry you had to come over here. We’ll do whatever it takes to get the drier back up.”“Trevor. I don’t want you to do …..whatever! You’re already over budget. Just do what’s necessary and do it fast.” Jim didn’t wait for a response he tossed the tubing on the table with a crash and spun toward the door. With a few hurried strides he was out of the shop, heading toward the administration block.

Ninety percent of management improvement and cost saving initiatives are failures that end up wasting time, money and in the worst cases, result in catastrophic failures leading to injury or death.
Matt Polaski and his band of unsung maintenance engineering heroes at the Mornington Dairy Plant are frustrated by working in the ”circle of despair;” patching one breakdown after another. They want to do the right things right. Matt knows that the preservation of their mental well-being and the future of the company depend on the implementation of a best practices program. He realizes that his marriage may even survive if they are successful!
Jim Champion, Mornington’s GM, wants to improve performance as well, but he can't wait as long as Matt's plan requires. Jim's approach leads to a temporary improvement followed by a major catastrophe.
When the dust and recriminations settle, Jim asks Matt to lead another improvement program. Matt and his crew have a tough choice to make.

Rob Probst has thirty years of international experience as a manufacturing operations engineer and manager. A graduate in mechanical engineering from UC Berkeley, he has authored articles on operational behavior, maintenance and engineering practices, as well as co-created the “ROI Engine”: a software program used to calculate the potential return for best-practices maintenance engineering program implementation. Rob has achieved certification as a maintenance reliability professional by SMRP, and production and inventory management by APICS. He also holds a graduate certificate in career development from Auckland University of Technology. Rob and his colleagues at the Edgecumbe site for the Fonterra Dairy Cooperative (NZ) were recognized for their achievement of world-class maintenance engineering practices in 2009. He is currently based in North San Diego County, California, and Ohope, New Zealand, where he works as an international consultant in maintenance engineering and pursues study and writing projects related to leadership and career development.