Angels at the Eastport Bridge 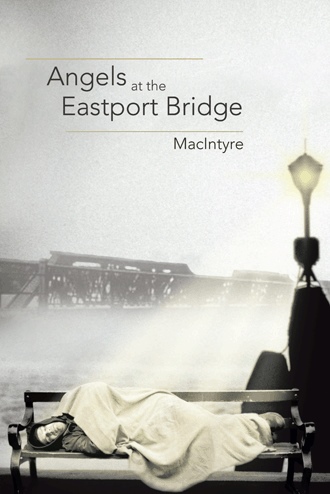 It was merely life’s coin toss and the terrible parking logistics in Annapolis which caused Professor Devon Morgan to turn into that small alley to witness a ragged, homeless man dancing, laughing, and splashing about, shouting loud nonsense to the heavens like a four year old boy discovering his first mud puddle. The fact that Devon recognized his oration to be fluctuating from English to an ancient Gaelic tongue while the bedraggled man spoke sincerely to the dripping ivy provided his second amusement. The third was his recognition of the dirty, bearded face of an old childhood friend, as Tane MacGregor turned and stared hot and glassy, yelling like a drunken Shakespearean actor, “It’s clear! Ha, ha, it’s perfectly clear!  My God, it was there all along!  Finally, finally!  Oh my God, those poor damned souls!”
Then, turning and taking note of Devon, he looked into the perplexed Professor’s face, tapping his index finger to his chin, and spoke calmly as if Devon had just stopped by for tea.  “Dev, how the hell are you?  Really missed you man!”  With this, he reached over and gave the professor an incredibly warm, sloppy, dirty hug, and kissed him square on the forehead.  Looking down into his eyes and with another moment of pure lucidity, he said, “Don’t have an umbrella do you?  Kind of crazy to be standing out here in the rain, don’t you think?”  Then, looking madly through his pockets like he lost his pocket watch, Tane quickly said, “Look, I’d love to talk, but I have to run!”
Following this was a surge of electrical energy sending this vision of the night laughing and running as graceful as ‘Nijinsky the Cat’ away from the St. Johns professor.  Devon’s last vision of Tane MacGregor was of him crossing the Eastport Bridge with his water soaked overcoat flying behind like the dirty cape on the back of some homeless super hero.  The last sound he heard was the wind whistling past his ears and through the newly budding trees. The fragment of solid reality remaining was MacGregor’s unmatched wing tips slapping a diminishing, watery, beat over the bridge’s rise and out of sight into Eastport leaving him incredibly alone with his own echoes and a soft, “What the…?” escaping his lips.
Standing next to his trusty Volvo station wagon with the rain softening his neck, Devon realized anyone observing this scene would easily, and quite understandably, know they had just witnessed a possible hallucinogenic episode by any one of the numbered street people in their quaint little town.  However, Professor Morgan had the one connecting factor, which made him come to a most different conclusion, that something was afoot here not meeting the eye.  For you see, though Tane MacGregor had left the alley, his Angels had not and were still sitting on the wet stone wall swinging light feet, somewhat transparently rustling water from their wings, staring at him, and kicking cans into his already twisting mind.  Curiosity, in this case, did not overcome fear even though his eyes refused to let go of the scene.  What motivated Devon to fumble like a madman with the keys to his car was the perceived fluttering of those wings through the trees after a quick snap of lightning as he was abandoned by a delusion of his own.  This occurred along with the faint sounds of the first four notes of the  “Hallelujah Chorus”, that did not sing “Hallelujah” but, “Tane MacGregor” and the hint of one of those flying fantasies saying, “Son of a Bitch!” as a tree branch cracked.
With more frequent and distant lightning, and as the freakish early spring storm gathered speed, he was left alone in a dark back alley world with a newly scratched car door and more water in his pants than the rain could have provided.  Then, there was the prayer that someone, or some thing, other than his dwindling mental stability could provide witness to this event.  Not a chance, Dev.

Though it may seem a bit complicated, the story is simple, and when all the pieces are laid out, it is plain to see where it all began. It started with one single human by the name of Tane MacGregor; one single, officially insane, homeless dust rag of a man. He occasionally caught glances from passing strangers as he swung his feet rhythmically from the drawbridge over the calm waters of Spa Creek, and he was often found in the company of angels.

As it was said, MacGregor was seen as the glue, the string binding all the events and beings which created a rather remarkable occurrence in the soft, beautifully adjacent, scenic towns of Annapolis and Eastport and, in particular, about the small Eastport Drawbridge over Spa Creek, spanning and dividing the two.

Now, as the story would be told and retold in most homes and taverns around the Chesapeake for many years, it was too easily called coincidence. True, it began at a certain time with a certain person, in a certain situation, accompanied by an incredible series of events, people, celestial beings, lawyers, homeless schizophrenics, ghosts, God, junk food, and small deviations in time and space, with waving definitions of good and evil, all coming together in a perfect harmonic mix … but coincidence?

Having traveled and lived in over 60 countries , working in situations few of us could understand, seems to contradict a man whose childhood and adolescence was spent on the easy, laid back, rivers and inlets of the Chesapeake Bay.  As he once said during a lecture, “I have often been given to say “yes” to the most ridiculous of adventures, travel and possibilities, which has caused me to get shot, stabbed, blown up (Sort of), my heart broken, and my soul repaired, all of which has occasionally made me wish I had listened to the reasoning voices of the Chesapeake to stay home and in her loving arms.”