Lead From The Heart:

Transformational Leadership For The 21st Century 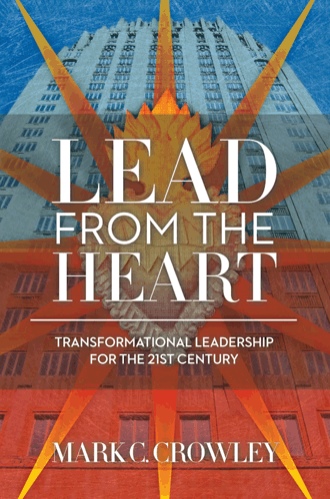 HOW WE LEAD IS FAILING:
THE NEED FOR HEART IN LEADERSHIP

To the business that we love, we eagerly arise, and go to with delight.

Our Traditional Leadership Model is Archaic

Our common and traditional approach to leadership has not significantly evolved since the dawn of the industrial age. “When it comes to managing people in a work environment, we’ve always treated workers like any other input: squeeze as much out of them as possible and pay them as little as possible.” According to Wharton Finance Professor, Alex Edmans, this idea was introduced nearly a century ago when the expansion of the U.S. economy largely was based on industrial machinery. Workers were required to perform relatively unchallenging tasks and were easily replaceable. Companies motivated workers primarily with money, paying by the piece to reward those who produced the most widgets. And so, if you think back a hundred years ago, the average worker went to work in order to meet their most basic human needs – to put food on the table and a roof over their heads. In exchange for their work, they received money, and money alone was entirely sufficient.

In a 1943 paper on human motivation, psychologist, Abraham Maslow, introduced the theory that people are motivated by a hierarchy of needs. “Maslow’s Hierarchy” most often is depicted as a pyramid where the bottom level represents a person’s most essential needs for food, water and shelter. His theory said that just as soon as these primary physical requirements are met, human needs progress to a second tier, the needs for safety and security1. And as people advance further up the pyramid, the needs become increasingly more social and psychological, and desire for connection, personal esteem and feelings of accomplishment take priority.

At the top of the pyramid, Maslow emphasized the importance of “self actualization,” a process of growing and developing as a person to maximize one’s full human potential. Maslow believed that people naturally and instinctively strive to fulfill all of the upper level needs – but only once their lower level needs have been met. So, once again, looking back a hundred years, the average worker wasn’t thinking much if at all about the higher tiers of Maslow’s pyramid. They weren’t thinking about respect, the visibility of their efforts to the greater organization or, especially, any form of personal fulfillment.

The Business World – and Our Employees – Have Become Far More Complex

The overriding focus of leadership through the history of business has been to drive profit. And since workers historically had low expectations of what would be offered to them in exchange for their work (and more often were simply grateful to have an income), decisions on how to manage workers almost entirely were driven by the bottom line. Very little attention was placed on the welfare of workers – or to any of the higher level human needs Maslow identified. But as we fast forward to today’s business world, shaped by rapidly changing technology and the far greater value of institutional knowledge, creative thinking, and sophisticated collaboration, the value of each employee has grown exponentially more important. These days, companies are producing more high quality products and services. They’re focusing on innovation and unique differentiation and almost exclusively are looking at people, and not machines, to provide it.

Yet, in many significant ways, our approach to leadership has not adequately evolved to address and support the needs of the 21st Century worker. It ignores that workers no longer are as easily replaceable. It ignores how much businesses forfeit in terms of lost productivity and continuity when experienced employees leave. It ignores how greatly the needs of workers have changed and that people now seek – and “need” – much, much more from work than just a paycheck. Pay, as a motivator, in fact, no longer ranks number one for most people.

Being paid equitably will always be important as a driver of job satisfaction, engagement and productivity. But, over time, as people have become more affluent and their basic needs became satisfied, their higher level needs for things like respect, recognition and even fulfillment in the workplace have become much more important. And so now, people have progressed to the higher level needs – to the tip of Maslow’s hierarchy – and far beyond pay (ironically, some people no longer even need to work but do so to fulfill higher needs). They now seek through their work the kind of actualization that Maslow outlined nearly seventy years ago.

The Desire For Meaning, Purpose and Fulfillment From Work

A leadership axiom a century ago had it that people didn’t want to work and would dodge it when not otherwise bossed around. The common belief at the time was that the only means of ensuring engagement was to reward people with pay tied directly to their level of productivity. Today, of course, most of us have the more enlightened view that people actually have an inclination to enjoy work and that performing one’s work well can be intrinsically rewarding. Work, of course, has become far less tedious and monotonous for the most part, but what’s really happened is that people have ascended in their needs and have landed on work as the place to fulfill them. People today have dreams and aspirations of work unimaginable a hundred years ago. While work will almost always be about a paycheck, the profound change of our times is that people have welded their sense of well being to their satisfaction with work. Research shows that the number of hours people work has increased over the past twenty years. With less down time for people, and with no change in the number of hours in a day, it’s reasonable and even predictable that people would expect more from work in terms of personal fulfillment than ever before. But, even with so much of our lives invested in work, it still may be surprising that how happy we are at work now sets the stage for how happy we are in our entire lives.

According to a 2006 Europe-wide study conducted at the University of Aberdeen in Scotland, one of the world’s oldest universities, job satisfaction has become the “most critical factor of life satisfaction and well being.” The study concluded that one’s career fulfillment doesn’t merely influence happiness, it’s actually become the top factor in a person’s overall satisfaction with life. “This is over and above our satisfaction with family, leisure time, health, finance and social life,” the report stated. The lead researcher, Professor Ioannis Theodossiou, explained it to me this way: “I suppose that if one spends roughly two-thirds of his or her day at work, satisfaction with life will be heavily dependent upon job satisfaction.”

This is likely true, of course, but it’s by no means the entire reason. What’s also occurring is that people now are seeking more from work than perhaps ever before. In a direct response to how their lives were shaken and even unmoored by the “Great Recession,” people across America are deep into the process of reassessing their values and reranking what’s most important in life. Consequently, people now are looking at work very differently…

Our common belief in business is that the heart has no place in workplace management.

In fact, most of us were taught that the heart acts like Kryptonite in leadership: it inherently undermines a manager’s effectiveness – and lowers productivity and profitability.

In this stunning and groundbreaking work, however, engagement expert, Mark C. Crowley, provides irrefutable proof that we were wrong.

Crowley begins by showing us how traditional leadership practices are failing. Across the globe, employee engagement and job satisfaction scores have fallen to crisis levels. According to astonishing research from Gallup, 70% of the US workforce is now disengaged.

It once was that a job and a paycheck kept workers satisfied and productive. Today, pay barely makes the list of what inspires people to put their hearts into their work and contribute to their highest capacity.

Right before our eyes, human beings have evolved in what they need and want in exchange for work. 21st Century employees are seeking to find purpose, meaning and feelings of significance. What drives their engagement is feeling valued, respected, developed and cared for.

Crowley’s profound insight draws upon recent medical science discoveries which prove it’s the heart, and not the mind, that drives human motivation and achievement.

There’s nothing soft about Lead From The Heart. It represents the future of workplace management and a roadmap to driving uncommon engagement, productivity and profitability.

First and foremost, Mark C. Crowley is a business leader.

Mark spent over 20 years working as a senior leader at one of the nation’s largest financial institutions, most recently as Senior Vice President, National Manager for investment product sales. After leading his division to record sales and profits, he was named the firm’s Leader of the Year.

Throughout his highly accomplished career, Mark managed people in myriad business units (including Retail Banking, Lending, Business Banking and Investments) and routinely achieved exceptional performance. In all his roles, he consistently proved that leadership which balances the mind and heart – which intentionally supports and values people – is a far more productive and sustainable way of driving the highest levels of employee engagement and profit.

Mark is recognized as a major thought leader in workplace management and engagement. In addition to being a consultant and talented professional speaker, he’s a frequent contributor to Fast Company Magazine, and has had his work published by the Huffington Post, The Seattle Times, Reuters, CEO Magazine and The Great Place To Work Institute.