Going Out in Style

A Guide to Planetary Departure 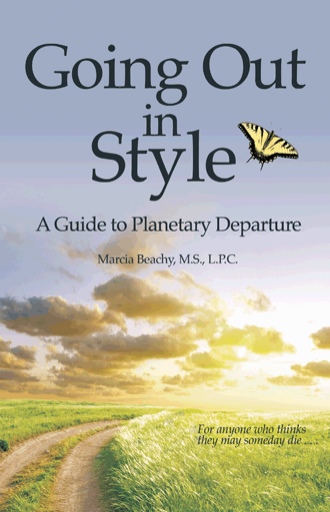 When we are in Basic Blinders Style thinking, we might say things like:
• Don’t know. Don’t care!
• I’m not dying. I’m fine. So why talk about it?
• In fact, I’m not going to die—ever!
• Yuck, who wants to think about dying? How morbid!
• That scares the bejeebers out of me! No way am I talking about dying!
• Not now. Maybe when I’m old…
• I don’t want to talk about it, okay?

You get the drift. You don’t need to be a young nursing student taking a Human Growth and Development exam to realize how firmly anchored death-denial blinders can be.

Have you wondered what it’s really like to cross over into the afterlife? Would you like to make it a good trip for yourself—or be an ambassador of goodwill for someone who is dying? If so, welcome to this rich forum of information and compelling personal stories.
You may be cynical, frightened, sure or unsure about life and what happens afterward, but in Going Out in Style, you are warmly invited to join the discussion on conscious living and dying. Many people, just like you, are redesigning their exits as they live more consciously. Whether you want simple guidelines or the latest departure upgrades, you will find this a fascinating exploration that includes:
• Your “style” of living and dying
• The variety of heavens from which to choose
• Practical tools for conscious living
• Tips for navigating the afterlife
• What you will want in your own first-aid departure kit
• What to include in transition ceremonies
• How you can affect your own departure right now
• How to avoid becoming confused or lost

Marcia Beachy, M.S., L.P.C., has been a practicing psychotherapist and teacher since 1984. She is an avid explorer of human consciousness, inviting people to join her in uncovering the landscape of the soul. From material gathered in her own work with past-life regression therapy, and from that of many other pioneers, Marcia has created a thoughtful and unique guide on conscious living and dying for the Western mind. She resides in southern Colorado.