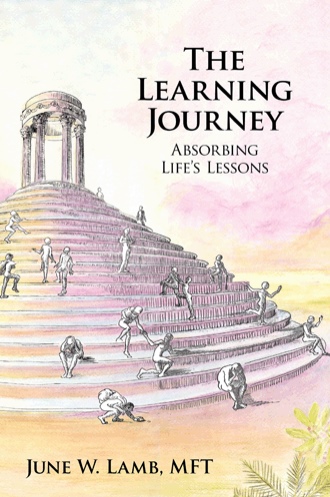 Why are we here? What is life for? Is there a point? These questions come up in discussions during psychotherapy sessions in my office. Although there are many approaches in attempting to answer them, one of the most effective has been to share my visual image of life’s purpose as illustrated on the cover of this book. Without the acceptance of our evolutionary journey from animal to human, one could not make sense of the various levels of consciousness we all experience. And yet, we are each on our own step toward that evolution, experiencing our own soul journey. Without the model presented by our many wise teachers that sees higher consciousness as the goal of our present evolution, it would be difficult to accept the challenges of life that push us in that direction. To see the entire human population on the planet moving toward the goal of “highest” or as scripture says “sons of the most high”―each at our own pace, whether it be fast or slow, makes it possible to let go of resistance to variations of consciousness, lack of or growing self awareness, and to keep focused on where we teach and where we are taught.

Many wise teachers have pointed the way to higher consciousness for me. Some of them were Teilhard de Chardin, Jesus of Nazareth, C.G. Jung, Kahlil Gibran, Elisabeth Kubler-Ross, and Harry Rathbun.

Life is a classroom. It can be tedious when you find yourself in classes where the lessons contradict every truth you believe to be a certainty. When I was a young child, my belief system included simple, dependable rules that had been taught by family, church, and school:

If you are good, life (God) repays you.
If you are bad, you are punished by that same God.

Being good meant following simple rules. The rules are put forth by Protestant, Catholic, Buddhist, Islamic, Judaic or Zen teachers. When these rules are received by a child they are generally accepted as “right” and go unquestioned until they fail the believer. The rules outlined by most religions and social systems are similar in the child's perception: obey your parents, don’t tell lies, study hard, marry in your religion, have your children baptized, be moral and loyal to your friends. Further, because of your many contributions to family, a religious institution and the community, you are “protected.”

When I found that obeying these rules did not support my experience in real life, I first felt betrayed, then angry, and then determined to find the rules or truths that would support a meaningful journey from birth to death. In my search I determined that truths would no longer be based on the teachings of others without testing them against my personal experiences, discoveries and conclusions. I have found many teachers who guided this exploration and have been fortunate to live in a geographical center where most of them could be heard in person.


The contradictions in my childhood beliefs have all been major turning points in developing a perspective on life that stands the ongoing test of reality, whether painful or joyful, and confirms the dependability of the absolute law of cause and effect, which is universal. My life has been a journey that included the investigation of the source of beliefs; the discovery that change, growth, and learning never stop; and a deep and abiding wonder at the potential of human beings to transcend, transform, and conquer the most painful and terrifying circumstances of life. At some point in our evolution of consciousness I believe we will not need the jarring, fragmenting events we now experience in order to become conscious; we will willingly continue our growth, be it with pain or pleasure.

The first forty years of my life were propelled by traumatic events which required constant attention to strategizing responses. The shock of wartime death when my fiancé was killed in the Battle of the Bulge, and later the puzzling burden of living with a husband who had suffered a lobotomy because of brain cancer, shook and fragmented my understanding of what could be expected in life. However, the strength I found in those experiences made the agonizing wait on a liver transplant list with my second husband many years later more bearable.

After my first husband's surgery and his death seven years later, survival for myself and my three children became the only task I could manage. After all three children had graduated from college, I turned to my longstanding thirst for education. After earning two degrees, a Bachelor’s Degree in Interdisciplinary Social Sciences and a Master’s Degree in Counseling, I became a licensed psychotherapist at age fifty-six. I was absorbed and elated when studying Freudian, Adlerian, Jungian, and Rogerian theories and the cognitive theory of Albert Ellis which was then controversial.

It was as though a window had opened and gradually I began not only to understand my own life but to realize that most people have similar experiences of confusion and insight as they go through life. I discovered that all humans struggle with resistance, denial, joy, ecstasy, fear, grief, victory and loss. I was moved by the teachings of Elisabeth Kubler-Ross to know that my pain and grief had been given words. Her wisdom not only helped me to finish processing my own challenges but to have a voice for teaching others. In my work I have taught community college classes, trained hospice volunteers, presented weekend seminars and done crisis counseling for high school students. During all this activity I maintained a comfortable income from my private practice. In all of these settings the lessons have come not only from my education but also from my personal life experience in striving for more self awareness and consciousness.

Beginning with a very traditional childhood set in the historical period that experienced the Great Depression, WWII, the advent of high technology (modern automobiles, jets, television, computers, cell phones, the internet) plus the Vietnam and Gulf Wars, and the calamity of 9/11, I have also seen the development of global transportation, the feminist and sexual revolutions, the arrival of the baby boomer generation, radical changes in family life, political chaos, with overwhelming consumerism and technological advances. With all these changes and the more recent advent of world terrorism, no single generation has had to use more energy adapting than people in my age group.

Many times I have found that the wrong question was being asked in attempting to gain stability, understanding, and contentment. Instead of asking when everything would be calm, or when I would have enough material possessions to be happy, what needed to be asked was “What’s next?” Although stubbornly determined to find nirvana in this life, I learned that as long as we are walking on this planet, there will continue to be more experiences, more lessons, more victories and more challenges whether we expect it or not. Pursuing traditional value systems as a means to an end frequently ends with the question “Is this all there is?”

The goal of learning to embrace challenge also requires the willingness to experience severe pain. It is helpful to know that in achieving these goals, we gain a new level of wisdom, sensitivity, compassion, and gratitude for life that can bring inner strength, higher consciousness, and peace regardless of outer events. Achievement of these goals can carry one through the impact of the most traumatic internal and external events. 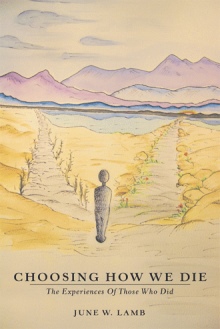 The Learning Journey compels the reader to see their own journey through life as a climb toward consciousness and survival. This gripping true story of one person’s successful struggle to survive tragic and chaotic challenges can lead others to an examination of childhood scripts, and a recognition of their own value system based on their life experience.

Combining psychological and spiritual wisdom, June Lamb, gives guidance and inspiration for those willing to step into the classroom called “life” as they explore what it means to be human. The acceptance of loss as part of that classroom, and the search for finding authority in religion, medicine, higher education, and law are widely explored in her absorbing story of a life full of universal themes that will be recognized by all. She tells her personal story in conjunction with case examples drawn directly from her years of practice as a family therapist.

The Learning Journey compels the reader to see his or her own journey through life as a climb toward consciousness and survival. This gripping true story of one person’s successful struggle to survive tragic and chaotic challenges can lead others to an examination of childhood scripts and a recognition of their own value system based on their life experience. Combining psychological and spiritual wisdom, June Lamb gives guidance and inspiration for those willing to step into the classroom called life, as they explore what it means to be human. The acceptance of loss as part of that classroom and the search for finding authority in religion, medicine, higher education, and law are widely explored in her absorbing story of a life full of universal themes that will be recognized by all. She tells her personal story in conjunction with case examples drawn directly from her years of practice as a family therapist.