How Forgiveness and A Course in Miracles Can Set You Free 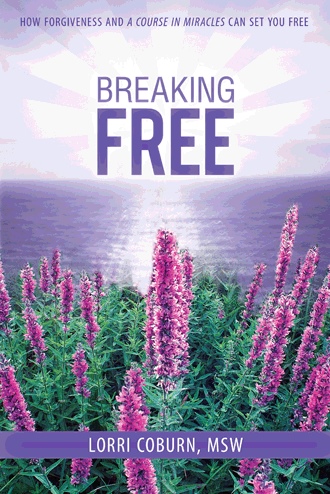 There ain't no fans nor no rest and, brother, there ain't no Cokes in hell.
--Anonymous North Carolina preacher

Most of us have an innate fear of death. It is an inherent survival mechanism. The Bible teaches that God judges and punishes us with hell, and this leads many of us to feel terrified and cut off from our Maker. My client Terry had been in therapy for about a year and a half for alcoholism. He was sober and trying hard to improve himself. One day he came in and began speaking in a shaky voice. “Lorri, I’ve got lung cancer. I’m going to die." A single constrained tear rolled down his face, followed by a stifled sob. “I know I’m going to hell because of all the people I killed and tortured in Vietnam.” He then broke into unbridled tears. My heart ached to see him so terrified, and I tried to reassure him. “Terry, there is no such thing as the hell you were taught. That was just said to control and frighten us, just as you are frightened now.” Unfortunately, Terry was not reassured. He left, stating that even though he and I were close, he would not be back because he would feel embarrassed and weak if I watched him die.

I never saw Terry again, but years later came across a thank you card he had written me, and it put a smile on my face. I loved Terry, and only wish I could have helped him through his terrifying experience. I knew that he would eventually be ok, but probably not until his body died and he found out that there had been nothing to worry about after all.

The type of fear that Terry had is one I hope to dispel in this book. You are safe, there is no death in reality, and you are loved by a God who would never even think of sending you to a hell. God does not, and never has, seen us as sinful and separated from Him. Sadly, this is not what a lot of us are taught growing up. Many of us are instilled with the same type of fear, if not terror, that Terry experienced. While religions may mean well, the results of their teachings can be extremely harmful, as in Terry’s case. Terry suffered needless terror and trauma, when he could have had a loving and positive transition into the next realm.

A less intense though still damaging type of reaction to the threat of hell-fire is the guilt and fear that many people feel when they think they’ve done something wrong. I had a young mother as a client, Jan, who was a sweet, intelligent woman with an angelic face. To look at her you would never suspect the shame she carried. Jan had a young child and was pregnant with her second. The year before she had had a brief affair, and got pregnant by the other man. She had not been having sex with her husband, so decided she must have an abortion to hide her affair. Jan was so racked with self-loathing and guilt that she was depressed, anxious, obsessive-compulsive, and hateful toward her husband. She was convinced that God would never forgive her and that she would go to hell for murdering her baby.

What if Jan was raised with the knowledge of a God that loved her no matter what she did? What if she knew that she was innocent by virtue of being a beloved child of this God, one He would always embrace and never condemn?  She would still have sorrow and guilt over the affair and the abortion, but they would be much less intense. When people believe that God himself hates them, they feel hopeless and despairing. There is no way out.

When I was about ten, my best friend’s cousin Alice had twins, and one of them died at three months of sudden infant death syndrome. I felt so bad when I heard that Alice was wailing, screaming, and moaning. Insensitive people told her that she at least had the other baby and she shrieked, “I don’t care! I want Emma back!” My friend’s father was extremely angry and I cowered as he shouted, “If one more person tells me this is God’s will I’ll punch his lights out!” I thought silently to myself that it was God’s will, as that’s what I’d been taught in church. I sure wasn’t going to say it out loud though.

A Course in Miracles' Answers

How much pain have cost us the evils which have never happened.
--Thomas Jefferson

A Course in Miracles offers a different way of thinking about traumas such as Alice's loss of her baby. It definitively repudiates that God created the cruelty in this world. The Course says, The world you see is the delusional system…If this were the real world, God would be cruel. (T-13.in.2:2; 3:1)* If Alice believed in the traditional idea of Heaven, it likely gave her some small comfort of reuniting with her child. However, she has probably grieved for this child all these years. If Alice were to practice the workbook lessons of ACIM, she could learn to experience that she and her baby are one and that there is no separation in reality. We are capable of feeling our loved one’s presence regardless of physical death. Heaven is a state of mind found right here and now. It is not some far-off place after we die. This is what Jesus meant in the Bible, “the kingdom of heaven is in the midst of you.” (Luke 17:21 RSV) As we do the Workbook lessons, we become more peaceful by the day, in spite of whatever is happening in our lives.

This is the central teaching of ACIM. This world, since it is filled with fear, is an illusion, as God creates only love.   All problems arise from one error, the mistaken belief that we are separated and alone and that God has abandoned us. This false belief keeps us cut off from our Source, much like a kink in a water hose prevents the source of water from flowing to its destination. We are unable to receive God's love when there are kinks in our thinking.

We are like Dorothy in The Wizard of Oz, dreaming a horrific nightmare, and when we wake up we will find we never left Heaven. Like Dorothy, at some level we long to go home. Even though Dorothy thinks Oz is a beautiful place, she says, “But just the same, all I kept saying was that I want to go home.” Moment to moment we have the opportunity to click our heels and go home, to choose to between love and fear, between the truth that we are still with God or the illusion that we have separated from Him. The Course calls this the choice between the ego’s way of thinking and the Holy Spirit’s view of the world.

A Course in Miracles (ACIM) is a spiritual self-study course that shifts our thinking to experience miracles as natural, rather than supernatural, occurrences. Its teachings, while from Jesus, are a radical departure from orthodox Christianity, and are a correction of Christianity. ACIM teaches that we have never left God and Heaven, and that we are dreaming our lives here on earth. We are having a bad dream in which we fear that we are separated from our Creator, and this is the cause of all the traumas we experience. The promise is that we will wake up and recognize that we never left home. The way out of the dream is by choosing love over fear, and forgiving every single thing that upsets us. As we release judgment, we remember our oneness with God and life becomes loving and peaceful.

A Course in Miracles states that God is pure love, and as love, would never create hell or punish his beloved children. Because this earth is a dream, and dream occurrences aren't real, no one has ever sinned. God did not send Jesus to die as a sacrificial atonement for man's sins, because God was never angry with us to begin with. Jesus willingly chose to be crucified to teach us that the body and death are not real. He did not suffer on the cross because He knew He wasn't his body, and his mind was solely identified with God.

“Lorri Coburn is a woman who demonstrates in this book that she doesn't just ask the tough questions, she has also found the answers. I've never seen a more satisfying explanation and resolution of the mysteries of life. I enthusiastically recommend this wonderful book.”

-- Gary Renard, best-selling author of The Disappearance of the Universe.

Lorri Coburn received her Masters in Social Work degree from the University of Michigan in 1981, and worked as a psychotherapist for 25 years, specializing in substance abuse, anxiety and depression, and spirituality. She is an Interfaith Minister who facilitates a study group and conducts classes and workshops on A Course in Miracles. She draws on the thousands of clients she’s seen to illustrate the principles of A Course in Miracles.

Lorri lives near Ann Arbor, Michigan, with her partner of ten years, Rod Rodriguez. Together they study the Workbook lessons of A Course in Miracles each morning, in English and Spanish.