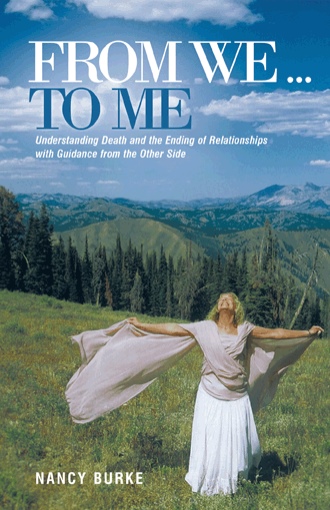 From We…. To Me is for any person, male or female, who has experienced devastation from separation, divorce, or the death of a loved one. While there are many books written on these topics, this book is original because of the views and suggestions of its co-author, Ghivda, who was author Nancy Burke’s former husband, Tom. He has been communicating with Nancy from the spirit side through a medium. Tom made his identity known through his awareness of specifics that Nancy has lived through and specifics occurring in her present life. His humor and his syntax are also earmarks of Tom when he was in physical form.

Tom died very suddenly at the young age of 55, while skiing. In spite of reading every book she could find on death and grief, Nancy spiraled deeper and deeper into grief and depression. From We…. To Me offers new thoughts and understanding and is a positive approach to assist you in raising yourself from the debilitating grip of grief. Ghivda’s views and explanations from his perspective of unconditional love and wisdom are completely enlightening and extremely different from when he was in the physical as Tom.

Discover the difference From We … To Me can make in your life.

Nancy devoted many of her adult years to the raising of her and Tom’s eight children, originally in the Chicago area. Her home for the past 20 years is in Sun Valley, Idaho, where the 3 youngest children were raised. She enjoys skiing, hiking, traveling, and bringing the information in this book to groups. Since writing From We … To Me, she is writing a sequel and a children’s book. During the past year she has enjoyed opportunities to speak to groups on the subject matter of her book and related topics. She is passionate about these speaking engagements and the realization that every experience of her life has brought her to the joy of bringing this information to others in the hope of bringing enlightenment and peace to those open to the possibilities in their own lives.