Everybody Sneezes and Sea Sponges Too!

The Environmental Journey of Santé Pristine 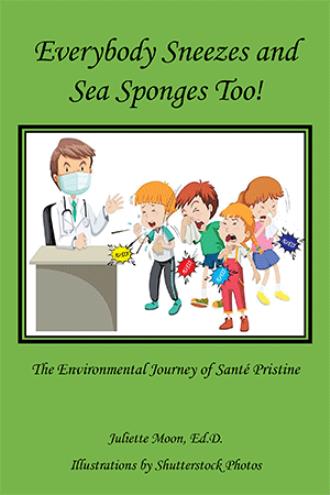 Santé, who is noticeably intelligent, has a very lively imagination. If she reads about or observes it, then she lives it! She benefits from exploring by touch, observing things in 3-D, and communicating with other animals, especially humans, who are her primary support. Santé also appreciates the rising of the sun and listening to the wind-filled crisp blue skies, as they invite the chirping of the bird's music to her ears. If asked, Santé would say that her greatest characteristic is being a naturalist. Having unquestionable soft skills, you can differentiate between Santé and many other mammals who are not approachable and who are somewhat temperamental. She is emotionally-gifted, and there is not one creature who she detests, or who despises her. Santé not only sets the tone for other pigs, but she is a species that humans love to replicate. This is what makes Santé an amazing Blueprint. One day, after the start of Summer, the atmosphere was absolutely hot and muggy! Although she preferred invigorating her taste buds with a large scoop of sorbet from the nearest ice cream café, Santé found it more rewarding to play in the murky water, to stay cool, even though it meant being unappealingly messy! While she has lively taste-buds, it is impossible for Santé to possess sufficient sweat glands, like those of a soccer player on a scorching hot day, with no trees in sight! In essence, she is not able to produce perspiration as fast as humans, whose glands are said to be much more active. In fact, Santé knows that we can sweat on-demand, without even being exposed to any heat! She is aware that stress can raise body temperature. Being solo on stage in front of a huge audience, Santé knows firsthand! While taking her daily powerwalk, the exhausting heat encouraged Santé to head towards a farm's irrigation system. She first found a spot that was worn by the pressure of water, which left a large muddy patch. It was refreshing to be in touch with nature! After rolling in the mud, the scrupulous pig chasséd over to an in-ground lawn sprinkler, to wash off her clammy body. Besides, she was healthy and pristine! The seamless spraying sprinkler allowed Santé to shake a lot of the mud from her tough, but moist hair. This task took her at least three attempts, to make sure the mud had dissipated. Splish! Splash! Splash! While the murky water was her least desired choice, because she stayed clean, it was imperative that Santé kept her body temperature maintained. It was also refreshing to be nice and cool, especially feeling the breeze from the tress that reached within the blue silhouettes. More attractive, the bursting Sun peeked between the tall timbers, as Santé walked in the shadows of shade. The activities left her famished. She strolled between the green hues and grazed in the meadowlands. Santé finally came across some fresh and beautiful vegetation. The crisp greens caused an allergic reaction! Her legs began to shake after consistently sneezing! Consequently, Santé began to squeal loudly, especially after the sneezing failed to subside. She never exercised her lungs the way she was forced to do that day! Santé immediately took off running! Although it felt like a marathon, She sprinted only a few blocks away, directed by her GPS, which detected danger. It lead her to the nearest veterinarian clinic. On her way to the clinic, Santé glanced at a reflection of herself in the window of Joi's Grocery Store. She squealed even louder and ran faster, especially after seeing her beak-red puffy nose, and face full of tiny bumps that exaggerated her beautiful features. It was like an episode in a horror movie! As soon as Santé made it to the clinic, midmorning, the veterinarian's assistant escorted her to a state-of-the-art waiting room. It was noticeably refreshing to be in an air-conditioned environment outside of home. The attractively-decorated high tech clinic housed books, magazines, an eatery, furniture, and a large high-definition television with Bluetooth capability.

Have you ever heard of the "Forbidden Fruit Effect" and how it relates to temptation, and choice? What if you happened upon essential nourishment that was forbidden? Inspired by sneezers across the globe, "Everybody Sneezes and Sea Sponges Too!" is a quirky story that features Santé Pristine, the most unlikely, daring, and vibrant character who defies all logic, especially after being confronted by the natural, but not so nice, environment. She uncovers and consumes the plant of "knowledge of good and evil" in the meadowlands.

Santé's journey is invigorating and infused with facts that demonstrate how the most careful individual can stumble upon what appears to be safe and nutritious. She finds herself investigating sneezing facts. However, Santé is consumed by reading so much research about other species, that she forgets about her own allergies. She questions nature's lack of gentleness.

Juliette Moon, consultant, and researcher is the author of A Note of Willful Intent, Bubble Gum Took My Breath Away, Teacher Reflections, and Affectionate Moon. Inspired by Thomas R. Guskey, and committed to teaching and learning, to enhance pupil/teacher performance, Juliette fulfilled a dissertation project in Prenatal Substance Exposure and Its Affect on Student Achievement: Implications for Teacher Efficacy and Professional Preparation. She also participated in "Understanding Teacher Quality (UTO), an Educational Testing Services (ETS) Study, presented by the University of Michigan."