THEY CALLED ME A HITMAN

A Suitable Case For Treatment 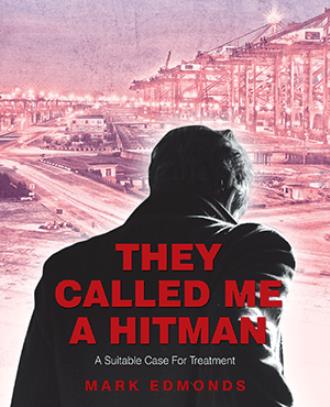 When I was a little kid, I saved my entire family from certain death. One dark night we had been driven by a friend to Altona to inspect a mysterious flame that was lighting up the night skies. Our friend navigated by driving towards the flame. He found a road which looked as though it could take us close to the flame. Things were looking promising. We drove down the road to get up closer to the flame. As we got closer, we realized that it was a flare burning waste gases from a newly built oil refinery. By now we were only separated from the refinery by what looked to be a disused railway line. We stood on the railway track admiring the flare when my sharp little child’s hearing picked up a distant rumbling sound in the rail tracks. I called out: “I think there is a train coming, - I can hear something”. The adults didn’t know whether to believe me or not but to be safe everyone jumped off the rail tracks onto the grass beside the line. We jumped only just soon enough. A goods train came thundering along the track. We had unknowingly been standing on the main rail line to Geelong. It was a huge scare for us all. We had come very close to annihilation that night. At a very young age I learned that I was from a communist family. But I didn’t get this information first- off from my parents. I was hanging out with a bunch of older neighbourhood kids when a visiting cousin asked the group: “Which one is the Commo kid?” Total silence -then all eyes turned to me. Him! I went home and asked my mum and dad: “Are we Commos- the kids next door seem to think we are?” I could see from my parent’s reaction that they were dismayed to hear that cold war attitudes had now reached the kids in our street. But I had no concept of what Commos were and it didn’t make any difference to me to learn that this was what we were. Like all little kids I loved my mum and dad. If they were Commos, well then so to speak was I. Being born into a communist family was akin to growing up in a small cult. Communist families were isolated in the community and becoming even more isolated as the all-pervasive cold war ramped up following the second world war. Looking outwards from inside the family it felt as though the family was enclosed by an invisible hostile ring fence. Comments I made as an 18-year-old engineering student regarding Fidel Castro’s 1959 revolutionary ascension to power in Cuba led to my downfall in the eyes of the authorities at the engineering college I was attending in Footscray as a government scholarship student. (Footscray Institute of Technology) Those comments also led to the creation of my file at the Australian Government’s spy agency, ASIO, where I became categorised as a dangerous subversive. My file at ASIO then tracked my movements in Australia for the next 60 odd years. I have no doubt the file is still in existence. In their wisdom the developers of the curriculum announced that our narrow technical course needed to be broadened. They had engaged a social studies lecturer for this task. The lecturer’s first attempt at enlightening our insular bunch of budding engineers was to explain what he believed were the evils of the Castro led revolution which earlier that year had overthrown the US backed notoriously corrupt Batista regime in Cuba. Although I had only a passing interest or knowledge of what had happened in Cuba, I spoke during the subsequent discussion and expressed a view that perhaps Batista deserved to be overthrown by what was perhaps a popular uprising. The lecturer reacted by putting down my views with strong rhetoric. He rejected any concept which entertained acceptance of the evil Cuban revolution. At home later that day I spoke with my father who backed me for speaking up and gave me some further background to the events in Cuba. During the following social studies lectures the argument raged between the lecturer and me on the topic of Cuba. The discussion then morphed into other contentious areas with much the same differences of opinion. Meanwhile the rest of my class of would-be engineers sat silently mystified at the hubbub. It was soon apparent that I was developing a reputation within the college as a dangerous subversive. The gossip seemed to be running strongly in our narrow little environment. It was probably a new experience to have a political controversy raging at this engineering only campus. My new reputation was conveyed to me in various ways, some more subtle than others. I learned many years later, after I had gained access to the government archives, that a well-meaning but anonymous patriot at the college had gone to the trouble of reporting to ASIO that I was a fanatical red tainted subversive. ASIO then got to work on creating my file.

Born into a communist family which he describes as a cult, Mark Edmonds went on to study at the International Communist School in Moscow. His father, Lloyd, had fought against the army of the Spanish fascist, Gen. Francisco Franco, who launched a civil war in Spain against the popularly elected Republican government. But Mark chose to not live as a red rebel on the fringes of society. Instead, he went out into the real world while keeping some of his inherited rebelliousness. He worked as a taxi driver in Melbourne and as a rookie journalist on a Communist party newspaper. He was a photographer, bookshop owner, and community radio program presenter. He ultimately achieved his dream career as a mechanical design engineer, becoming a high-flying engineering project manager and family man. Eventually, he earned the nickname “hit man” for protecting his employer’s financial interests against the manipulations of a bullying construction site manager. Join the author as he looks back at how he escaped a political cult, the people he’s met and loved, and those he’s crossed swords with along the way.