RISING ABOVE THE SHIT

Transformation through a lifetime of consequences 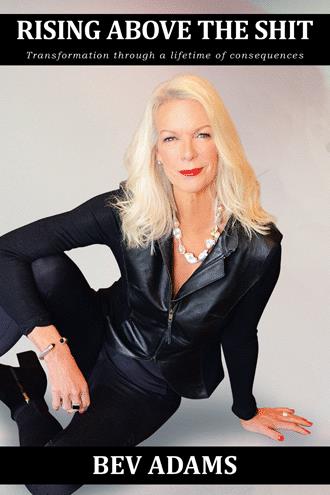 “Ken didn’t move. I tried CPR. He started foaming at the mouth. I watched as his breathing grew slower and slower, the terror tearing every fiber of my being and brain apart in total disbelief and shock as I faced the reality that his departure was final, and maybe he wasn’t coming back. It was just me and him on the floor—him dying and me screaming. I screamed for God, for anyone to save his life. I pleaded for any entity to help me resolve what was happening, to reverse the moment. Where was God? Was there a God? If so, where was he? How could this be happening? Minutes seemed like hours as I tried anything I could think of to save his life. Was he somewhere above me watching as the three ambulances, three firetrucks, and fifteen EMT first responders burst through the doors? Seven minutes after the 9-1-1 calls, there was a village trying to save his life. Where was he? Where had he gone? “Please, please live!” I pleaded to the air and to anyone who could hear me. “Please live!” Was he floating in an ethereal space, saying to me, “I’m so sorry, darlin’; it’s time for me to go”? “Settling into the Queensland life, I found a job as a waitress at the Captain’s Table, a French restaurant where the chef, from Paris, was a food dictator. He didn’t speak much English, and my French wasn’t the most fluid, but we managed to fight with body language. My midriff was bare, the miniskirt way too short, and my tourniquet-like uniform top was so tight my oversized bosoms were forced to seek any available spaces close to my chin! I looked like a whore. I concluded that the French food assistant was a whore, as I observed her in her assignment of slicing, chopping, or preparing the side work for our chef. Her lack of undergarments revealed parts of her fanny and breasts, both overtaking the restricting minimal clothing she wore. The chopping board was aligned between her legs as her skilled knife energetically demolished parsley or any other assigned garnish, her breasts bouncing in rhythm. Smoke from the stationary cigarette that never budged from the center of her mouth puffed out each corner of her mouth, creating a full length ash that eventually fell into the chopping for additional organic garnishment. It just looked like pepper, and she really didn’t care. Her dislike of me was obvious, and she would mumble French profanities at me if ever I came near her. After a short time, I was speaking limited French and returned the obscenities back at her. She and I never became friends.”

This book will make you think, make you laugh, will draw you to tears, and touch your heart. At twenty-one years old, Bev emigrated on her own to Australia, escaping the dysfunction of family dynamics, to search for new life beginnings. She found inner wisdom, intuition and tools to ‘Rise Above the Shit’ through near-death experiences, angel healing of her tachycardia, loss of children, and PTSD resulting from her husbands’ death. This entertaining and impactful memoir is filled with authentic sacrifice, fear, trauma, tragedy, and a lifetime of accomplishments threaded with rambunctious humor.

Currently residing in Colorado, Bev Adams has lived throughout the USA and Australia. Bev started her passionate design career renovating a bird farm in Perth Western Australia. As Founder and President of Interior Intuitions Inc., Bev has been rewarded as a National and Regional published interior designer. Now semi-retired, she continues to ‘design-by-heart’ not only for interior residences, but for teams and individuals to understand the ‘heart brain’ connection as a HeartMath Certified trainer.