You Create Your Life 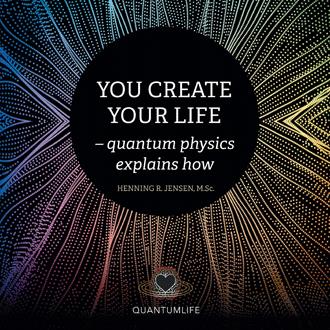 Life is No Coincidence We can, of course, choose to continue to live in Isaac Newton’s mechanical world. It was defined in the 1600’s, which is a long time ago, so the question is: is this the truest model for life in the current millennium? There’s no doubt in my mind that quantum physics provides a more accurate model for life on Earth. The theories been thoroughly tested and have shown that everything is energy. Matter comes into existence because of energy. The model has also shown that many of the phenomena that we once thought of as supernatural are actually natural. In my eyes, a change over to the quantum physics model where everything is energy and everything is connected is crucial. I call living life based on knowledge from quantum physics ‘quantum life’. Quantum life recognizes that life is created from the inside and our thoughts, feelings and beliefs are fundamental to the life we live. Quantum life also recognizes the connection between brain and heart and the balance between the left and right brain hemispheres. The activity in the right side of the brain is often called feminine energy while activity in the left side of the brain is called masculine energy, even though it has nothing to do with gender. When there is a balance between brain and heart and between the masculine and feminine energies in us, we function as whole human beings – we avoid inner conflicts and the energy we send out vibrates harmonically, so it becomes much stronger. In the language of physics, this is called ‘coherence’ – laser light is an example of coherence at work. Laser light is a beam of light that vibrates at a certain frequency, where the waves have the same direction and oscillate together. This makes the energy in the light beam of the laser so strong that it can cut through thick metal plates. Normal sunlight is made up of electromagnetic light waves with different frequencies. These are also spread out or diffused so the light does not contain the same powerful energy. Coherence between the heart and the brain, and between our two brain hemispheres is crucial for creating the life we want. Coherence between the heart and the brain, and between our two brain hemispheres is crucial for creating the life we want. If energies don’t vibrate in unison – if they are not harmonic – they can work against each other so that the collective energy becomes less effective. If your brain wants something but your heart wants something else then the energies that they are sending out are not in accordance – they are not coherent. The two energies won’t be collaborating and becoming stronger but working against each other and becoming weaker – they are inharmonic. We can all create the life we desire. Some people have the advantage of having healthy beliefs about themselves from the outset while others have had a more difficult start in life and have taken on beliefs that impede their progress. Our beliefs lie in our subconscious and are ‘installed’ primarily in our first 7 years of life. We need to be aware of our beliefs though, in order to change them. What you don’t change, you choose! Most industries build their high-tech products based on quantum physics. All electronic products are based on quantum physics. It’s not just factory-produced products that use quantum physics though, people do too. We can understand ourselves and the world we live in far better when we accept quantum physics’ description of the world instead of the classical scientific view that is built on Newton’s theories from the 1600’s. Newton saw physical material as being the foundation for the universe’s origin and development. The problem is though, that there is no physical matter – there is only energy. Quantum physics has shown us this. The physical matter that we experience is our senses’ interpretation of the energy. The Big Bang caused energy and matter to emerge but the matter came about because of the energy, not the other way around. There needs to be energy in order to structure the creation of matter. We can send energy out in the form of our conscious awareness, our thoughts and our feelings. For me, this is one of the most important conclusions we can draw from the work of Einstein and company. Quantum physics has shown me that everything is energy and that our thoughts and feelings create energy in the form of electromagnetic waves sent out from our brains and hearts. Your thoughts start the energy, your feelings amplify it and your actions give it momentum. We create by sending energy into the quantum field where things materialize and become experiences for our physical bodies, whether material or immaterial. Everything is energy and your brain and your heart are the best tools you have. Everything that exists in the world started as a thought or a feeling. Your brain and your heart are the best tools you have – your hands and feet are just slaves to them. Besides everything being energy, we are also connected. We all send out energy waves and these waves meet each other continually. We can’t do anything without sending out energy that spreads out like rings on the surface of water and touches us all. It doesn’t make sense to see us as separate beings. We can lose our sense of belonging but that’s not the same as not belonging or not being part of the collective organism that is humanity. We have to let go of the old, materialistic world view because it keeps us stuck in old beliefs that there are limited resources that we need to fight each other for in order to survive. This outdated view keeps us believing the idea that individuals who acquire the most material goods will live longest and happiest. It’s obvious that this is not the case and this idea creates separation between us instead of solidarity and unity.

We create our own lives using our thoughts, our feelings and our beliefs. Thoughts and feelings create and emit energy that influence both ourselves and our environment. Quantum physics has enabled us to measure these waves from the brain and heart and we all have our own unique frequency, because it depends on our DNA. This explains how a mother and her baby can sense each other and how identical twins can sense each other across the planet. Your health is also influenced by your thoughts, feelings and beliefs because they cause the brain to release chemicals to the body based on how you are perceiving the world. Quantum physics shows us that fundamentally, everything is energy – i.e. everything is connected in the same way that waves in the ocean influence and change each other when they meet. This is why the feeling of connectedness is so important for all of us. By being conscious of how we act, feel and think, we can better steer our lives in a desired direction. By clearing out old beliefs that no longer serve us and by creating balance between the brain and the heart – and between the left and right brain hemispheres – we can attain the life we desire. Henning provides four concrete exercises that you can practice, to you create the things you want in your life.

Henning R. Jensen is a qualified electrical engineer (M.Sc) and a Carnegie Mellon certified Enterprise Architect with 22 years experience in IT and business development. With many years of experience in communicating contexts and complex technologies to both technical and non-technical colleagues and customers, Henning has the ability to describe in easy-to-understand language how the connection between the physical and non-physical worlds can be understood with the help of quantum physics. Phenomena that would traditionally be understood as supernatural can actually be explained logically and scientifically.