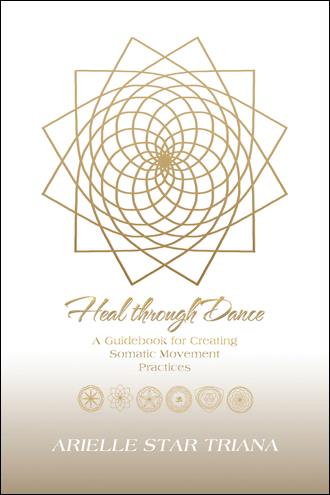 A guidebook for creating your own somatic movement practice, Heal Through Dance distills the essence of Arielle Star Triana’s teachings for a worldwide audience. Designed for instructors, dancers and beginners interested in freeform movement, Heal through Dance celebrates physical embodiment within the context of the sacred feminine.

Star as she is known to her students masterfully weaves together exercises known to heal trauma with ancient cultural practices ranging from Indian, Egyptian, and Hawaiian to Native American, Essene and Celtic.

Heal through Dance is an invitation to become your own healer and an ecstatic dance facilitator. Let your dance become an embodied prayer through the layers of Earth, water, fire, love, SOUND, and light.

“A work of beauty sourced from the stars.”

“The playlists for trance dance, tribal dance, and infinity dance are exquisite.”

“The alchemy you create in this work is that of a true healer.”

Arielle Star Triana
While spending six months in silence, Star had an insight that changed her life in ways she never could have expected.

After college and a successful corporate career, the question arose, “What else is there?”

During a short hiatus from corporate life, Star went on a spiritual pilgrimage to the Himalayas with her Guru from India. She spent nearly a month trekking to the highest mountaintops that held some of the most ancient temples on the planet. After this trek she headed south to the ashram, where she did volunteer work, which touched her so deeply that she phoned her mother to tell her that she was leaving her corporate career to move to India to be a volunteer.

She returned to the U.S. and gave away her possessions, scaling down to just two suitcases. Then, she was off to India, indefinitely, as the pathway of a spiritual journey opened.

When she left her corporate career and luxurious lifestyle of jet-setting weekend getaways and high-powered global meetings, it was to follow the path of becoming a yoga teacher. She felt the Universe speaking to her through the people around her and the message was to become a yoga teacher.

Her “Yoga” mission took her to India where she lived nearly five years doing volunteer work, which involved setting up a yoga spa, an Ayurvedic healing center, and a scholarship program for 2,000 underprivileged children. It was a life-changing experience.

An important tradition in her yoga teacher training involved each student spending two weeks (sometimes up to one month) in silence. When she received the instruction that it was time for her to go into silence, she assumed it would be two weeks. However, two weeks came to close, and she was instructed to stay in silence indefinitely.

During what ended up being six total months in silence, Star meditated up to 17 hours per day. One day she experienced everything starting to vibrate. As she opened her eyes her surroundings became a blur. In this vibration she heard voices that spoke and said, “Ecstatic Dance is the new yoga.”

After receiving the message, she had to wait until she came out of silence to figure out what “Ecstatic Dance” was.

During the six months of silence, Star spent many hours each day doing powerful Kriya and Kundalini yoga practices, which ramped up her energy so much that she experienced states of ecstasy so strong sometimes she could not walk because she was falling over in a drunk-like state.

After coming out of silence, Star began to research “Ecstatic Dance” and learned that it is a modality of conscious or spiritual dance.

Star’s first stop on her journey to discover ecstatic dance took her to Germany where she experienced an Ecstatic Dance nightclub. This was a big “wow” moment for her. She had no idea ecstatic dance nightclubs even existed and could not believe everyone was dancing, ecstatically high, without drugs or alcohol.

Star was utterly convinced, “This was it!” This is what the whole yoga mission was all about. Leaving her corporate career, spending five years in India, training intensively in yoga, volunteering hundreds of hours, and spending six months in silence all led her to this point.

She thought if something so simple and fun could give her this much joy and bliss in such a short amount of time, then it was definitely worth exploring further.

She studied various forms and modalities of conscious dance and became a facilitator, teaching consistently for two decades. During this time she did research and studied the healing benefits of dance while working with thousands of people in classes, workshops and teacher training.

Star has birthed a facilitator training and book based on her research and experience and has dedicated her life to passing on the wisdom of healing dance.