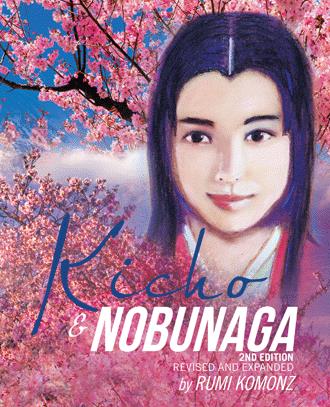 The Ceasefire – 1548 ‘Did you sleep with Hidé?’ Father narrows his serpent-like eyes. He is Saito Dosan of Gifu, known as Lord Viper. I shake my head from side to side, listening to my long hair rustle on silk. ‘He’s a coward, Kicho,’ he spits out the words. He leans his elbow on the black lacquered armrest. ‘What a coward!’ ‘Hidé is like a big brother to me.’ I defend my cousin. I look down and tidy my rainbow-colored kimono sleeves on my lap, waiting for Father’s next words. ‘Knowing he is a quitter, I have a marriage proposal for you.’ Lord Viper slides his sturdy hand into his kimono front and pulls out a folded document. ‘Another one?’ ‘We can’t ignore this one, Kicho. It’s from Lord Tiger’s eldest.’ I gasp. ‘His eldest? Do you mean the one called Lord Fool because he fools around with peasant boys?’ I throw a frown, but his viper eyes become thinner, letting me know he is serious. I carefully extend my hands in good manners and receive the document. I unfold the Gifu paper adorned with gold dust and pressed flowers. ‘to cease strife or do strike – time has come to be my wife,’ I read it twice and tilt my head. ‘A riddle, Father?’ Lord Viper laughs holding his belly. ‘It’s from a young man to you, Kicho. What do you think it is?’ ‘Hidé writes fancier.’ I pout. ‘Forget your cousin and listen to me. The Fool’s got a nerve. He knows that I am not giving you up easily.’ I look to the side. ‘Does he mean to attack my mother’s home Akechi, if I don’t marry him?’ Lord Viper moves his head to the garden. He stares at the camellia bush as he always does when he faces a difficult situation. ‘The word ‘time’ in homonym refers to your mother’s heritage.’ As he lets out a long sigh, a crimson flower falls with a thud. ‘I want you to go to Aichi to marry the Tiger’s son.’ His viper eyes are almost pleading. ‘I am at your service, Father,’ I say. I’m prepared to jump into fire if it helps to forget Hidé. ‘The Fool has a younger brother called Victor, a handsome lad, I believe.’ He beckons a quick grin, like he’s heard my gossiping with my young maids. ‘Unlike the Fool, Victor enjoys his mother’s affection. He can be better for us also.’ ‘Why?’ ‘Victor can even be better than the Fool. A docile leader will be easier to control.’ ‘I see.’ ‘According to my informer ninja,’ Lord Viper lowers his voice as he looks around his expansive lounge partitioned by fusuma sliding screens. ‘…the Tiger is indulging in sake and women lately. His wife and her family wants him out before their administration collapses.’ I nod. ‘Victor lives in his parents’ main castle and he’s popular there. If and when the Fool loses the majority support, you should marry Victor.’ ‘How?’ I whisper. Lord Viper reaches into his kimono front, this time taking out a dagger. He passes it to me. I sit up. ‘Your treasured dagger for me?’ I embrace it. ‘But, Lord Fool is a skilled swordsman, I hear.’ He nods. ‘Mother’s shown me the ritual for ...’ ‘No, Kicho.’ His face turns. ‘Never kill yourself whatever happens.’ I stare at him. ‘Mother taught me differently.’ ‘She has her silly samurai pride…’ ‘You are a samurai, too.’ ‘I became one by marrying her. I am proud to be dubbed the Viper of Gifu, who stole the district from the aristocratic master. Do you know why I named you Kicho?’ ‘Ki means to return, cho is a butterfly. I might come back to Gifu one day like a butterfly.’ He grins. ‘Your mother’s parents loved you so much that they decided to honor me as their son-in-law, despite my common birth.’ His eyes become mere slits as he smiles. ‘Kicho is a homonym for “good luck”. You have enchanted my life for 14 years, and owe me nothing. I believe you have some mysterious powers.’ I shrug. ‘If I did, it didn’t work on Hidé …’ ‘Forget Hidé, I told you. Now, listen. There are many ways to kill a man.’ I sit up. ‘Once the Tiger goes, no one will support the Fool. When the time is ripe, you shall stab him in the back.’ I pause staring at him. ‘What if I fall for him?’ He laughs. ‘He’s a fool, Kicho. Obey him and honor him, but make sure you don’t fall in love. Luckily, the Fool has his favorite pageboy, my ninja tells me. Do you know what I mean?’ I nod slowly. He clears his throat. ‘I’m hoping you don’t have to sleep with the Fool. Women can fall for unworthy men once they sleep with them. You look after yourself whatever happens. Take herbal remedies to avoid pregnancy, if you have to sleep with the Fool.’ I bite my lips. ‘Do you know what might happen, if I fall in love with Lord Fool?’ Lord Viper shrugs. I unsheathe his dagger, and flip it towards him. ‘I might use this against you!’ He bends backwards, gripping on the armrest to balance his weight. I giggle. ‘Pardon me, Father.’ I bow in good manners and sheath the weapon, retracting my exposed forearms into my crimson under-garment. He laughs chokingly, as he straightens his armrest. ‘Young vipers are born tearing the mother’s womb. Don’t hesitate to grab an opportunity to take advantage of anyone, and that includes your parents.’ ‘Do you really mean it?’ I ask. He nods, now resting his arm statesmanlike on the black lacquered armrest. ‘I am proud of you, Kicho. You need to be ruthless to some, to be kind to many. Someone needs to end the territorial wars before we are all dead.’ ‘Thank you, Father.’ I lower my head, inhaling the fragrance of the freshly laid straw tatami, ready for the New Year. 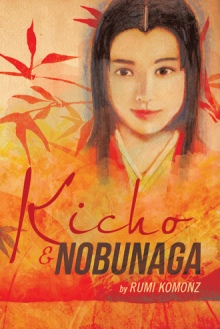 Exploring Lady Nobunaga’s involvement in her warlord husband’s triumph and tragedy during the social upheval of 16c Japan, Rumi presents her theory to the most debated mystery in the Japaese history.