Quit Office Politics and Be the CEO of You! 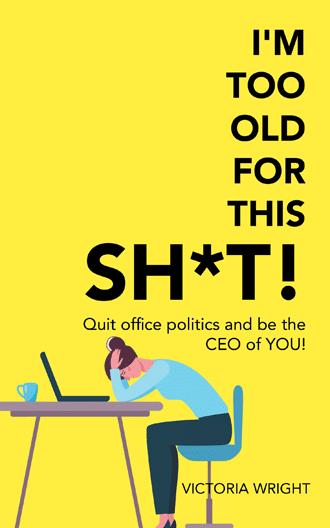 “Hi, just fill out this form, buzz me when you’ve finished, then take a seat and wait for me to come back” said the no more than 23 year old recruitment consultant. Startled by her rudeness, I steadily took a seat, pen poised between my thumb and forefinger above the form … and froze. “What the hell am I doing here?” I thought to myself. I’m in my forties and my job as a senior manager in a major company was made redundant several months ago. I’ve lost count of the number of applications, emails, phone calls, LinkedIn messages and interviews I have had since then. “Get a degree”. “You’ll get a better job and earn great money” they said. I have two degrees; led teams and managed businesses with turnover in the hundreds of millions; raised two children who are now young adults; maintained a marriage through financial and emotional highs and lows; cared for my elderly parents, and now my financial future and to an extent, my identity, is resting in the hands of someone less than half my age! Placing the clipboard and pen on the counter, I collected by bag and headed for the exit. “I’m too old for this sh*t!” I wrote this book is for everyone frustrated with their ‘lot in life’- whether from a work, financial or lifestyle perspective, yet feel trapped by circumstances, notably the need to earn an income to pay the bills, and not having the time and often the energy, to enjoy the fruits of our labour. There are many of you whom I believe will resonate with much of what the following pages discuss: Women generally, over 40 who find themselves to have hit the proverbial ceiling prescribed by the powerbrokers within a corporation, suddenly faced with an uncertain future predicated by corporate restructures, inequality and politics. Men, generally aged from 45, who find themselves in a similar situation with the added emotional burden of feeling they have somehow ‘failed’ themselves and their families by not achieving the level of corporate and financial success they had somehow thought would just happen by following the usual trajectory of ‘getting a good job and climbing the corporate ladder’. People who have invested their life’s savings into a business such as a retail franchise only to find themselves working around the clock to break even as they deal with a fickle casual workforce, slowed foot traffic in shopping centres and ever changing consumer preferences. People employed in manual or physically demanding work such as construction or nursing, who are finding their ability to ‘keep up the pace’ with increasing years tough, and are facing an uncertain retirement as savings plans may not have eventuated as planned. Women who put their careers on hold to raise a family, experience a major upheaval such as divorce and find themselves having to get a job for the first time in decades with many finding they lack the skills required today and the jobs they can perform can be filled by much younger talent at a significantly lower rate of pay. People who have tried network marketing and ‘failed’ – also known as quitting. People who diligently made lists of 100 of their ‘closest friends’, attended every event and were active on social media, only to quit several months later because it just wasn’t working for them. Or those who have never considered there is another way, another lifestyle from the corporate ‘9 to 5’ treadmill and a way to truly be financially free. The book is divided into five parts. Part One deals with the ‘old paradigm’ of. Going to school, getting a job, working hard for 40 years then retiring. Part Two discusses how those of us who feel “too old for this sh*t” got to where we are; Part Three shows how network marketing may be a way to achieve financial and time freedom. Part Four deals with the mindset shifts required to achieve freedom - starting with freedom from the limiting beliefs inside our own minds and Part Five provides practical steps with links to downloadable worksheets and further resources to help you overcome limiting beliefs, all of which are based on my own learning and experience in doing the same. This book is a fairly easy read, as it is just my story. There is no right or wrong, this book is simply my opinion based on my experience. My hope is for those of you who can see themselves, or at least part of themselves through my story, you will identify any beliefs or attitudes which may be preventing you from being truly happy by living the life you really want.

Are you tired? Tired of the daily rat-race of juggling a corporate job (which let’s be honest you don’t really enjoy) whilst running a household and trying to spend time with your family, let alone having any time to yourself? Are you fed up that the higher you try to climb the corporate ladder, the harder it gets, the more politics you encounter and the rewards seem even further away? Are you tired of feeling you are taking one step forward and three steps back with your finances, freedom and life? Have you tried network marketing in the past and failed? You made lists, you contacted everyone you knew and yet your result was a big, fat ZERO? Or perhaps you have never heard of network marketing and if you have, you have a poor opinion of it. Victoria has been there and done that! Climbing the corporate ladder for years only to be dumped on the scrap heap made her search for an answer to the niggling thought inside her head that ‘there has to be more to life than this’. Her search led her on a personal journey of discovery which resulted in overcoming beliefs which were limiting her success, to now earning multiple income streams. The focus of this book is on network marketing, dispelling the myths and rumours which surround this industry and showing how with the right mindset, you too can achieve success.

Over the years, she took the usual path of going to school and getting a good job to provide for her family. But she just knew there was more to life.

This is her story of how to leave the corporate rat-race behind for good. Through her story, she shares valuable insight into how our internal belief systems may be holding us back from achieving the life we dream of. Victoria explains how she and millions of others have said goodbye to the corporate grind to achieve financial and team freedom through a vehicle that is available to all. However to be successful, one must have an open mind and be willing to discard old limiting beliefs.

An easy, enjoyable read, this book gives you honest insight and inspiration. It guides you on a journey of your own reflection, questioning, and action to achieve the life you really want.