The Human Being - Evolution of Form, Awakening of Consciousness - Meditation 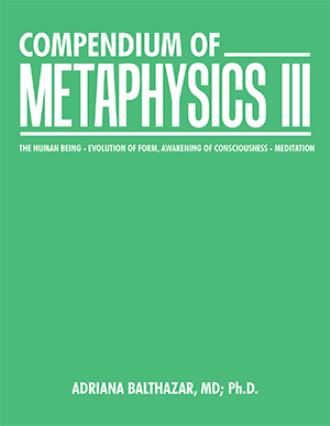 Compendium of Metaphysics III deals with the process of development human beings undergo at all levels of their constitution (physical, emotional, psychological and spiritual) under the interplay of energetic elements such as focal centers of energy (chakras) and the generalized influence of energy coming from various cosmic rays of creation. Incarnated individuals move constantly among three states of consciousness: deep sleep, sleep with dreams and awake. Through spiritual evolution the person discovers or awakens to broader and higher states of consciousness: soul consciousness, cosmic consciousness, divine consciousness and total oneness consciousness. When we consciously and purposely work for our spiritual growth, we accelerate our development toward the manifestation of full human potential. This work must be done by focusing on the following points: learning metaphysics and acknowledging spirituality, self observation and analysis, reaching an accurate conclusion about our state of being, self correction and transformation at all levels, always counting with the help of spiritual beings, developing a permanent practice of spiritual disciplines, actual practice of all that has been learned and finally service to humanity. Our spiritual work results in a process of integration/unification of the different human vehicles, in a way that renders them responsive to the original spirit spark (Monad) through the energy of the soul. This is done through purification, discipline, prayers and meditation. Prayer is a call to and conversation with God. Meditation implies elevating our awareness to higher spiritual realms, beyond the restrictions of the intellectual mind.

Adriana Balthazar was born in Argentina where she graduated at the National University of Medicine in Cordoba. After immigrating to the United States she specialized in Internal Medicine and Endocrinology. Balthazar also holds a PhD in Metaphysics and currently lives in Santa Fe, NM where she teaches meditation, metaphysics and tai chi.