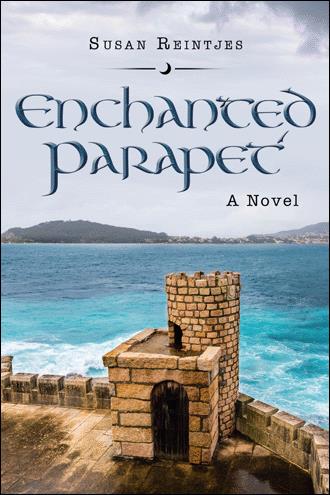 Enchanted Parapet is the tale of a wedding planner’s journey to the truth when she sees startling visions of her clients’ past life together that she must decipher before disaster strikes.

Bryn is co-owner of Anything Goes, a wedding planning company like no other. After seeing an ad for a romantic castle in the Shetland Islands, she snaps it up for her engaged clients without a second thought. But Bryn arrives to find the castle in disrepair, leaving her and her younger business partner, Jamie, only a week to transform the crumbling structure into an idyllic wedding venue.

Unfortunately, planning the wedding is not their only challenge. Bryn has been having visions of the couple’s past life together that are slowly revealing unfinished karma that must be resolved before a catastrophe unfolds. She follows these startling revelations back in time to weave together clues as she unravels the history threatening the couple’s future. Plagued with visions of a Viking battle and a love triangle, Bryn must now piece together the couple’s former life in ninth century Scotland. All the while, Bryn and Jamie are battling their own trials trying to deliver a storybook wedding.

Susan Reintjes is a psychic and healer who was featured in the bestseller, Proof of Heaven, and served as a consultant to Oprah Winfrey. To date, she has helped thousands of clients clear illnesses, develop psychic abilities, resolve relationship dilemmas, and discover life purpose and creative potential. This is her fourth book.