The Bird of Destiny

Horus and the Silver Raven

by P.J. Sanderson Illustrated by Emily May 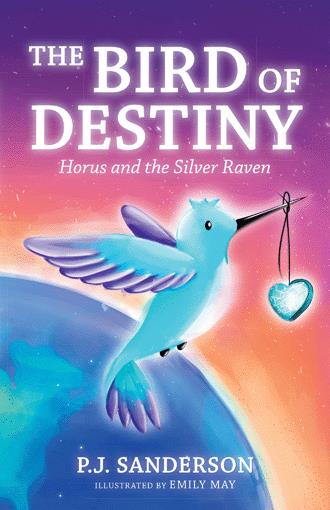 Chapter 2 One day, Horus was drinking some nectar from a flower when he overheard Saul the Jaguar, the oldest and wisest creature in the jungle, talking to Ananda the Snake. Saul had big friendly eyes and the kind of silky black fur coat that made you want to reach out and stroke him. The two were deep in conversation about a mysterious creature called the Bird of Destiny. According to Saul, this great bird had special powers that could save the animal kingdom forevermore with just a single thought. ‘Tell me more, O wise one,’ Horus heard Ananda, an enormous red-tailed boa constrictor who looked everything but silky and soft, say to the wise old jaguar. Saul beckoned Ananda closer so nobody else in the jungle could hear the secret. Young Horus shifted his focus from feeding on petunia flowers to listening to this life-changing conversation. As he did so, he nearly flew straight into a big branch directly above the jaguar. ‘The Bird of Destiny is the guardian of all the birds. He knows ancient wisdom, and when the time is right, he will use his powers to help heal the planet of all its problems,’ whispered the wise old cat. ‘Not only can he foresee your destiny just by looking at the stars and the planets, but also he can journey beyond the wildest dreams of all the other birds to other worlds. And that’s not all …’ Ananda the Snake inched ever closer as Horus strained every muscle to hear Saul the Jaguar’s great secret from the branch above. ‘Tell me, O master. Tell me, does he need any serpent The Bird of Destiny 9 medicine? Where can we meet him? What does he look like?’ ‘Nobody knows what he looks like,’ said the jaguar, ‘for legend has it that this mighty bird can shape-shift into whatever he wants to whenever he wants to. But most incredible of all, he has an ability that every animal and insect on the planet dreams of—he has the gift of listening to the spirit of the wind. And what’s more, according to the trees, he has been living in this very forest for quite some time, preparing for a special mission.’ Ananda the Snake looked around suspiciously, expecting to see the Bird of Destiny appear from nowhere. As he did so, Horus the Hummingbird fell out of the tree right in front of him and peered up sheepishly. The snake nearly jumped out of his skin. ‘Ah, it’s just a pretty little hummingbird,’ he hissed, disappointed. ‘I think the Bird of Destiny is a bit bigger than him. Ha ha ha ha!’ The big black cat did not laugh. Instead, he picked up Horus with his gigantic jaguar claw and gazed deep into his eyes. ‘Never judge a bird by its feathers, Ananda,’ he said. Horus dusted himself down, embarrassed about accidently revealing himself in front of the two animals, and muttered a rather timid apology. The jaguar smiled with great warmness and winked at him.

Nothing makes Horus happier than being with his family in their jungle home. But the human bulldozers are about to move in on his paradise. Not only will the destruction of all the trees leave his family homeless, the rising temperatures due to climate change are about to leave his species with no food – meaning Hummingbirds could be gone forever. With his dad missing and no bird willing to make a stand, Horus needs a miracle. So when he hears of a mystical bird called the ‘Bird of Destiny’ who can listen to the wind and change the future, he makes it his mission to find this extraordinary bird so they can save his species and shake up the humans so they see how climate change is killing the planet. But does the Bird of Destiny truly exist? Can Horus save Hummingbirds from extinction? And will he ever get to see his dad again?

P.J. Sanderson is a writer, poet, musician and shaman who is based in France. A former BBC journalist, he was inspired by his journey around the medicine wheel to write a book which would raise awareness about climate change and leave a legacy for his children and the seven generations beyond so they can live on a healthier planet. Ten percent of all the profits from this book will be donated towards saving the Hummingbird species.