English Should Be Written As It Sounds & Spoken As It Is Written! 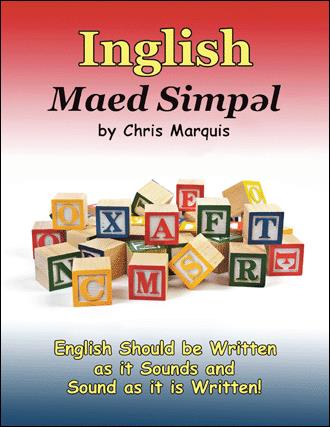 Janueəry 27, 1967 Jim Lovell (luvəl) woz having diner at thə Wiet Hous, wen hiz frend, Ed White (wiet) burnd too deph, Aktueəly, it wozn't realy diner Lovell woz having, just finger sandwichəz, o'rinj jooc, and unmemerəbəl wien, laid out on linən-kuverd taebəlz in thə Green Room. Aktueəly too, Ed White didn't realy burn too deph. Thə fuemz klaimd him long bifor thə flaemz ever kəd hav. At age 9.....On the London Underground, I listened to my father converse in English with someone I was sure was not speaking English! But this man was Scots, from Glasgow, Scotland and he was speaking English! In British East Africa, as it was then, my hearing had been limited to only four or five English accents, versus the very many distinctly different accents in Britain and Ireland (about 15), along with another 4 or 5 in North America. Many years later the tables were turned, when I took my American wife for a holiday in Britain and Ireland. We were having lunch in a Welsh pub, and she listened to me talking English to a a local, that she felt sure was talking back to me in Welsh! (the Celtic language of Wales) Of course, we both spoke English in two very different accents: his accent being Welsh, and mine from southern England, modified by 15 years in Canada and the USA.

Quite simply, English should be Written as it Sounds, and Spoken as it is Written. Inglish Maed Simpəl shows exactly how this can be done! Followed carefully, this text will enable publishers everywhere to transliterate the English language into an identically sounding language that is written as it is pronounced and pronounced as it is written. Read these 50 pages and you can do it yourself! For hundreds of years now, there has been a desire to sort out the spelling of the English language. William Caxton brought the printing press to London in 1476, at which time spelling became important, but was poorly served by foreign ideas and poorly translated English bibles in the following century. (page 17) In Old English, around 900 AD, these two ‘th’ sounds correctly had different symbols: Þ as thorn for three/phree, maths/maphz, or thing/phing; and ð as edh or eth. Thorn was written like ‘b’ on top of ‘p’; we keep the ‘p’ and write it ‘ph’ (phee). Eth was a circle with a wind blown cross on top, recently revived by the International Phonetic Alphabet; we will stay with the ‘th’ (thə) for rather/râther, other/uther, or then. (page 9) In these fact-filled pages, readers discover how the English language will be written in the very near future! At first it may be more popular with those learning English as a Second Language (ESL). But soon the benefits to everyone will become obvious! Babies born after the new text becomes commonplace, will learn sooner and advance further. After seeing how much faster their child learns to read, write and pronounce English, the parent’s pride in their son or daughter will soon outshine a more fragile pride in a knowledge of English spelling, based more on memory than logic. “Typesetters, paid by the word, developed an understandable taste for long words.” Correctly spelling words according to their pronunciation, followed by very simple unwavering rules, is a first step to slow down or arrest the tendency for the language to lose its variety and clarity of sounds. (page 16)

Born in UK, a childhood in East Africa, back to Britain for teen and twenty. New life in the New World. Six months exploring USA in the hippy seventies/ Canadian immigration. No contiguous province left unexplored. Citizenship in Canada. Thirty years in USA, selling rugs and flags from southern California through the Rockies to Montana, Florida to Massachusetts, hardly missing a state in my travels. Round the world trips include overland from London to Kathmandu. Back home in Vancouver, Canada 2018.