Five Secrets of a Great Relationship 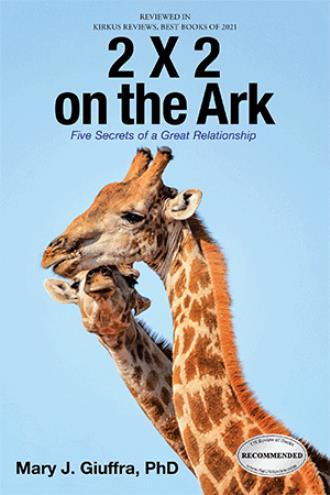 When God saved Noah and his wife from the stormy and furiously billowing waters overtaking their world and drowning fellow humans, there was a message. In the first chapter, you saw how animals on the ark learned to take personal space while allowing other animals to carve out some individual space. This was done while maintaining connection with others of their packs. Humans—fueled by conflict over property, differences in appearance, disparity in language, diversity of needs and abilities, and variations in power and resource—forgot how to share those resources and that power, especially the power of love. They wanted to own the earth and their fellow humans. God told them no and they had to learn to love one another as he loved them. When the storm was over, Noah opened a hatch on the ark and sent out a raven to see if it was safe. Marine biologists, cited in chapter 5, demonstrate that ravens are highly skillful in understanding human communication. Was Noah seeking to determine if old, divergent communication patterns remained? Were discordant prototypes still embedded on the earth as the raven kept flying back and forth before returning to the ark? Interestingly, Noah sent out a raven first. Then he sent the same dove twice before deciding it was safe to leave the ark. (Genesis 8:7-24) Is there a message for couples? The dove is traditionally seen as a symbol of peace. From the Ark, Noah and His Wife Emerge Free to Love Then God said to Noah: Go out of the Ark, together with your wife and your sons and your sons’ wives. Bring out with you, every living thing that is with you—all creatures, be they birds or animals or crawling things that crawl on the earth—and let them abound on the earth, and be fertile and multiply on it.… God told Noah: This is the sign of the covenant I have established between me and every mortal being that is on earth. (Genesis 8:15–17, 9:17) That was quite a heady charge to Noah and his wife. At one part in the story, God told Noah and his family that they were made in the image of God. If God is love, as the Bible says, then, as offspring of Noah, we are at our core love. It is a package deal though. The animals are on your journey. They are part of your evolutionary history. Those earthly creatures are still housed in your ancient brain. Follow them and experience fear and trembling from your reptilian or brain stem as you focus on survival and safety. Use fight-or-flight responses to overcome trauma. Sense attachment and security; fear rejection from your pack as the mammalian or emotional brain or limbic system calls out. But, wisely, let your smart rational brain be the executive on board. Children are encouraged to develop executive functioning as they get older. Use your smart human brain to steer the ship on your life’s journey. Enjoy those subcortical animal brains aboard. Remember, though, that Captain Cerebral Cortex needs to be in charge. Only then will you be truly free to love yourself and your partner. Dove Shows the Way The dove returned to the ark with a symbol of peace in its beak. Humans can employ their wise human brains to choose that love and peace deep within. We can experience the fight, flight, and freeze responses of the reptile; we just do not need to lead with them. We can experience fear, grasping, and anxiety when that mammalian brain fears being cut off from the pack or from food, but we need to ensure that the smart human brain is in charge. Couple relationships are an ideal opportunity to experience proficiency in lessons that Noah and his ancestors had to learn for peace on earth or in the home. As part of the earth, and there is only one earth, certain principles and images guide us. They are scientific and rational, transcendental or supernatural, irrational or magical, and divine or spiritual depending on one’s culture, beliefs, and experiences. They guide, condition, and comfort you. Use the brilliance of your rational brain to understand what beliefs and behaviors bring you closer to your dreams, goals, and values. Which ones recreate ancient animal behaviors? Retain desirable behaviors and eliminate those that deviate from that “image of God” or loving energy within. Recognize that whatever your image is—whether it’s energy and love, nothing or everything, one or many deities—it has been conditioned from culture and ancestors as well as from your life experiences.

This book is a wakeup call. It highlights relationships and staying in love as serious adventures for adults, not Disney rides for kids. Relationships make you stronger and more defined as a person or call out your weakest and least evolved parts. Falling in love is easy. Staying in love is hard. Do you wonder where love has gone? Has your relationship even your fights become predictable? Do you take one another for granted? Have career, children and family diluted the early excitement in one another’s presence? Or are you new to the love of your life and committed to growing in love? When you understand what makes people love, you learn the secret of a fulfilling life. Your relationship will transform, and you will be a model for children and other couples. Based on research in the neurosciences and years of experience working with thousands of couples and supervising family and couples’ therapists, I will share the Five Secrets of a Successful Relationship. The book will teach you what you never learned growing up or in romantic novels or films: how to be a LOVER. It will be your guide as you practice the Five Secrets to a Great Relationship: 1. Leave Space for Love 2. Operate Your Brains to love 3. View Your Conditioning with Love 4. Emerge Free to Love 5. Route and Navigate in Stormy Seas

Dr. Mary J. Guiffra has been counseling couples and families for over 40 years, a tenured professor at New York University where she received her PhD and holds an honorary doctorate of Humane Letters from the College of Mount Saint Vincent. As teacher to hundreds of couple therapists in training, Dr Giuffra has researched couple relationships and is widely published. She has presented at International conferences, TV and radio; served on the boards of professional journals, hospitals and community health agencies. A family consultant to schools, colleges and universities, she served as vice president to her local school board. Dr. Guiffra developed Biological Couples Therapy and presented it at The U.S. Association for Body Psychotherapy and International conferences in the Netherlands and France.