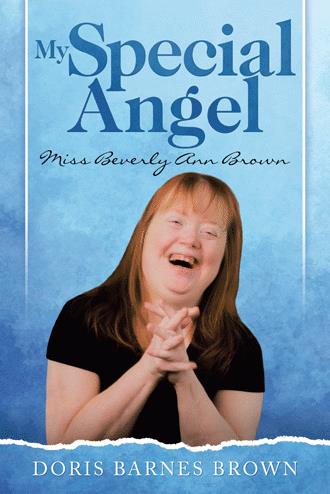 My Special Angel is a celebration of life story of a child who was born in 1962 and diagnosed at birth as a "Mongoloid." At that time, often children who were born with the extra chromosone which causes the condition were institutionalized at birth . If taken home from the hospital, many were "closeted." It was believed that these children were not capable of learning, therefore there were no schools provided by the state and very few private schools to attempt to educate them or any mentally challeenged children. My Special Angel, Miss Beverly Ann Brown, was never to be "closeted!" Fortunately, at the age of five, Beverly was able to begin a newly constructed private school built by volunteers on donated land. Finally, she and all other mentally challenged persons, regardless of age, were accepted in the small three room school. That was only the beginning of a beautiful journey for my redheaded, freckle faced ball of energy angel girl. When Beverly was born, my grandmother told me that she was an angel and that God put her on earth for a special purpose. Shes said that, though we could not know that purpose then, we would know it sometday. Grandmother was right, Beverly truly was an angel. I believe that God's purpose for my beautiful daughter was to spread happiness, joy and His love through those open arms and hugs to everyone she met during her fifty-five years on earth. Through her life's journey, she helped pave the way for a better life for all mentally challenged persons. When she had completed His mission on earth, God let her come home. In the early 1970's the name mongoloid was changed to Down's syndrome, after British physucuan, John Langdon Down,who first described the syndrome.

“My Special Angel, Miss Beverly Ann Brown,” is a story celebrating the life of a person who was born in 1962 and diagnosed at birth as a “Mongoloid,” later known as Down’s syndrome. At that time many “mentally retarded” persons as they were referred to, were institutionalized at birth or kept at home as “closet children.” Because they were believed to be unteachable, there were no schools or vocational workshops to even try to teach them. Change was coming and I believe that God’s purpose for Beverly on earth was to be a part of that change of the attitude toward and the mistreatment and neglect of the mentally challenged. Even at a young age, Beverly was a blessing spreading God’s love with her hugs to everyone she met. Through her experiences on her life’s journey and her desire for independence, this red-haired, energetic, beautiful lady was instrumental in helping to pave the way for other mentally challenged persons. At age fifty-five, when Beverly had fulfilled her mission and purpose on earth, God called her home.