And the angels whispered...

The journey back to spiritual awareness

by Sarah B. Diamond 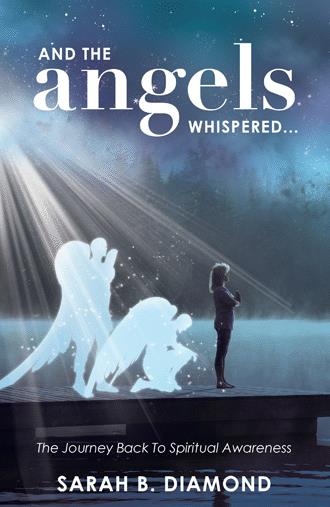 The Encounter June, 1995 life changed after my husband and I took separate vacations, and I started hearing voices in my head. Joe had ventured off to Las Vegas, NV to spend quality time with his two sons from a previous marriage, while I traveled to Chicago, IL to spend time with my family. During my visit, I spent some time alone along Lake Michigan’s shoreline as it was one of my favorite places to relax and unwind. It was also here I found myself face-to-face with an old love, a “true love.” I had called Ray a few days prior to let him know I was going to be in town for a week. He then made arrangements to pick me up at my mother’s apartment so we could go somewhere and talk. Seeing Ray again had stirred up emotions in me I had not felt in years. The memories flooded back causing heartache even though years had passed since we had gone our separate ways. I had accepted a job transfer to San Diego, CA and, sometime later, Ray had decided to move away from Chicago too. Now, here we were, in the same place at the same time, sharing moments of our lives with one another. Yet, there were things about Ray I had already learned from my mother. Over the years, she would run into him when he had been in town on business. One thing, however, my mother chose not to share with me were Ray’s messages asking me to call him. It wasn’t until two weeks prior to my arriving in Chicago, after having run into Ray again, she gave me his message. During my visit with Ray at the lake, I discovered he knew very little about my life in San Diego because he said all my mother would tell him was how happily married I was. Smiling, I too confirmed to him that was still the case. Unfortunately, Ray did not make the same statement to me about his marriage. He said he was not happy, but he stayed because of his children. Subconsciously, I wondered if he ever regretted not marrying me instead. Deep down inside I was hoping he did. This unexpected revelation, however, had made me uncomfortable with my feelings. I felt if I continued to stay with Ray much longer, it would lead to more heartache. So, I chose to say goodbye instead. When I leaned forward to give him a farewell kiss, I looked up into his eyes and thought I saw sadness — or maybe it had been my reflection staring back at me. He drew me into his arms, kissed me slowly and tenderly until I responded passionately. It was then I knew I had never stopped loving him. In less than an hour after Ray had picked me up, I was back at my mother’s apartment. Depressed, I wanted to go for a drink so I invited my mother and sister, Faith, to join me. While sharing my feelings about Ray with them, I broke down and cried realizing I was now in love with two men. A few days later I returned home to San Diego and to my husband. It was difficult for me to look at Joe without feeling guilty about how seeing Ray again had affected me so much. Knowing I could not keep these feelings to myself, I told Joe about the encounter and the emotional turmoil I was in. Joe, however, just wanted me to dismiss the incident just as he was willing to do. “Let’s just go back to our lives the way we were.” He said. But I couldn’t. Seeing Ray, and having to say goodbye to him once more, had been traumatic for me. I was experiencing depression and an emptiness I had never felt before. I couldn’t understand what was wrong with me. After all, it had been almost 13 years since Ray and I had last seen each other. Now I found myself wanting him back in my life, and it appeared he wanted me back in his life too. He called. I called. Each time we expressed regrets about the past and tried to understand one another’s feelings about the present. In doing so, however, we came to the realization that we both still had very strong feelings for one another. It was then we agreed not to talk to each other anymore. We had families to consider, and Ray and I knew we could never just be friends. After a month went by without a word, a voice in my head kept telling me to pick up the phone and call. I ignored this voice for over a week — then it yelled at me “PICK UP THE PHONE!” Contact - started the process all over again. I called. He called. I needed help. I needed a psychic.

I believe some things in life are predestined and that we have the capabilities of discovering what they are utilizing Astrology, Numerology and other intuitive tools. Having kept a journal, I was able to validate my theory. In 1995 a "special" someone from my past had re-entered my life. This led me to question my marriage and the direction I was headed. I sought to find answers through psychics, tarot readers and God, but it wasn't until I looked within that I found what I was looking for; I found the person I wanted to become. The key was discovering the link to my higher self — intuition. It is the voice within I have come to trust and listen to on the path I have chosen to follow. Along the way, I have had to face certain fears: risking love in order to find what was missing in my life; monetary security; and being judged by others for my beliefs. However, the journey back to spiritual awareness has been worth it to find what was missing in my life. By sharing my story, I hope it inspires others to heighten their inner awareness utilizing ancient tools to gain a better understanding of their past, present and possibly their destiny.