My Wild Ride on a Carousel

(By the Caterer Who Couldn’t Cook) 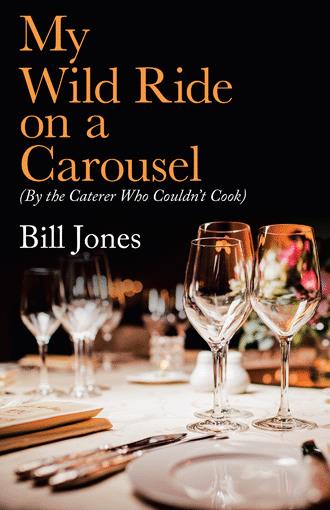 This is the story of Bill Jones, caterer to the stars and much more, told in 52 vignettes highlighting key episodes in his life and on the job. Follow Bill as he struggles to find employment even as he has had to drop out of high school because of his frequent Gran Mal seizures. Ride along with him as he takes you behind the scenes at catered affairs for celebrities such as Elizabeth Taylor and The Beatles; as well as the largest catered event ever (25,000 guests); and many humorous and touching stories of events for major corporations such as Herbalife, Hitachi, and Dr. Pepper. Most importantly, you will be inspired by Bill’s attitude of faith in one’s self and dreams, and his ability to move through adversity to success in tough and often unusual circumstances. If you’ve ever thought of being a caterer or just wondered what it was like, this book will delight you.

Bill Jones was born the youngest of six children in a poor family in 1930’s Brooklyn. With his father in prison for 15 years and Bill himself suffering from Gran Mall seizures starting in elementary school, he knows what it’s like to live a childhood with very tough circumstances and little chance of future success. Yet out of this he forged an incredible career catering to the stars of stage and screen, and some of the most influential corporations of our time. Bill credits his success to his spirit of determination, willingness to take on new challenges, and inner faith in knowing that it would all work out if he just followed his dream.