I Am Great Because I Believed It First 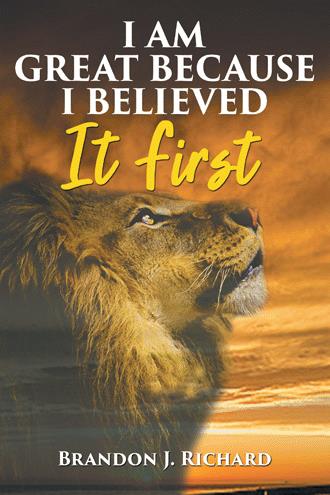 Passionately and with a relatable, eccentric, engaging, raw approach, I Am Great Because I Believed It First delivers the strong attitude and mind-set of belief in oneself starting now, in the present, wherever you are. It’s a mind-set that we must understand the “I,” regardless of external positive praise from others or negative criticism; it’s not real or relevant until you believe it, absorb it, and therefore embrace it. This book bodily and emphatically embraces the paradigm that the first step is, before anybody else in the world believes it, you have to believe it. That is the spark that brings every idea or thought to fruition!

Readers will be interested because basicaly the author being the author, using his unique gift to communicate, him as a young black man delivering that perspective on life, with an intellectual, but enlightened and relatable approach is all the selling angles he really needs. There author is really trying to connect to his audience; so he knows he's from the community, looks like the community, knows how to communicate to the community which gives him an edge of relatability. Plus the whole point of the book is to believe in yourself first; don’t worry about what whoever is doing right now, or what they say and feel about it. Especially if you are not hurting, or offending anybody. Speak, write, and live your truths and gifts because that’s what we are on earth to do. So to be honest, the author really doesn't give a damn what the other titles and authors are saying and doing, he knows he has something special and he knows people are going to feel his energy! His approach with this book is so unique because not only is he blending motivation (which is energy from outside of you) and inspiration (which is energy from within or from a higher power), along with a spiritual and enlightened perspective coming from a young black man from the struggle that seems well beyond his years. He use a very transparent approach to connect as much with the reader. With this book he wanted to show himself not as a well polished author; yet, but a young man that believed enough in his own gift, talent to communicate, motivate, and uplift that he took the necessary steps to show that to the world despite what his immediate external circumstances are, nor did i wait on someone else to do it for me. His ultimate goal is that the reader will understand that you have to believe they you are great first! Do not wait, that is your power of choice and it comes from within. He wants the readers to be fired up but enlightened as well. See in this book he couldn’t have stressed it enough that “you” have the power to change your life and create your own reality. The universe or higher power is in love with you and wants you to succeed, but you must believe in yourself the strongest now in the present and start laying bricks today to build that house of success tomorrow.