A Guidebook on Attention and Finding Truth in the Narrative Age 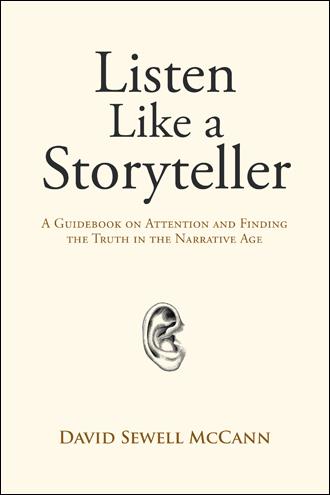 In all stories, there is what is called “The Golden Thread”. It is the through line – the tiny, almost imperceptible tether that connects a series of seemingly random events into a solid, fully formed story. Fairy tales and folk tales can wander – they have lots of tangents and don’t seem to follow the same formula. Most movies follow a rhythm and that is why most movies are predictable. Read the Grimm's fairy tale “Water of Life” or the Russian fairy tale “Babooska” and you regularly find yourself wondering ‘What is going on?’ and ‘Why are we here?’ In the end, however, we can see why everything happened the way it did – we can see the golden thread of the story. When you see how it landed, all the wandering and weaving suddenly makes sense. This is the biggest challenge with storying – or the spontaneous kind of storytelling when you are making up the content off the top of your head. How do you find and follow the golden thread when you don’t know where the story is going? What do you do when you aren’t sure your made up story is nonsense or if it is a story that serves some higher purpose, or if it is tapping into some kind of truth, or delivering some deep wisdom cloaked in seemingly unconnected images and events? If you don’t know the story you are telling, then how do you know where to take it? The way to answer that question is to “listen for the gold.” But how do you know what is gold? Well, gold … shines. One way to understand the golden thread of a story is to see a story through the lens of narrative density. Earlier we learned that when an image or word or part of a story is narratively dense, it has more pull – it is more attractive. Now imagine the same image or word or part of a story … shining. Imagine it as shining with golden light. It is beautiful and attractive and it pulls us … in a particular direction. This golden word pulls us toward the next word that shines and then the next word that shines and on and on until you have a complete story with a solid and unbroken golden thread. That is what a golden thread looks like, but what is it like in practice?

The modern world is made of stories, and the best storytellers now decide where to look, who to follow, and what is important. Whether we wish to raise resilient children or transform an entire community, listening like a storyteller is a fundamental skill now distilled into a simple practice.

Since 2011, David has written and told over twelve hundred original children’s stories for Sparkle Stories. Out of his experience as an elementary school teacher and parent of two lively boys, he developed a method of intuitive, transformative storytelling, which he now shares with others through keynote speeches, workshops, podcasts, and online courses. He lives with his family in Austin, Texas.