Detox Your Circle, Activate Your Destiny

13 Toxic Elements to Cleanse from Your Life 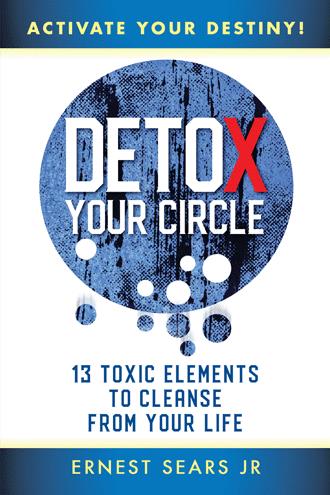 Step 6. Clarity I can see clearly now the rain is gone. – Johnny Nash As we move toward our destiny (and our destiny moves toward us), it becomes easier to see who we are and to understand why we’re here. It’s easier to recognize when things aren’t aligned with our vision and goals. We’ve gotten rid of many extraneous things—we’ve decluttered and detoxed—and this opens us to the clarity that makes us even more keenly aware of who we are, where we fit in, what our purpose is, and where we need to go from here. Because we now refuse to follow the programs of our past and we consistently live in our truth, we have entered a state of sustained clarity marked by a congruence between our thoughts and emotions. This clarity enables us to hold the frame of our vision of the future and how we intend to interact with the world. Clarity is what allows us to know without second-guessing who we are at our core. It allows us to live our mission without having to read it from a piece of paper or Word document. We are no longer in conflict or at odds with who we are. We are no longer doing, thinking, or feeling—we are simply in a state of being. We no longer spend as much time thinking one thing and feeling another. Such clarity makes it easier to perform frequent audits of our lives to ensure we are not taking on new extraneous baggage, behaviors, and attitudes. Especially those that do not serve us or match our vibrational frequency. Vibrational frequency, according to new-age thinkers, is our overall state of being. The higher the frequency, the lighter you feel in your physical, emotional, and mental bodies and the greater personal power you have. In Nanice Ellis’ article, “How to Consciously Raise your Vibrational Frequency,” she reminds us that trying to teach, heal, or effect change from an unevolved state only reinforces the old paradigms we are here to transform. This is why detoxing yourself before attempting to detox your circle is so important. The figure in the mirror is your first pupil. The clearer the image reflected back to you, the more prepared you are to move forward, to activate your destiny. The clarity happens automatically once we declutter and detox. In my life, I am in the process of clarity right now. I’ve decluttered and detoxed, and now I feel clarity about who I am. I feel strongly about where I want to be and my impact on the world. I am keenly aware of the opportunity I will miss, if I don’t stay on track. My real life has begun. The person I left behind was not a bad guy. He was a great guy, but for the longest time he sacrificed himself and his needs in an unhealthy way. This prevented him from reaching his own personal goals. That guy was somewhat of a martyr. He was following a program and going through the motions, rhythms that were set in place when he was very young. The program was that of the first born who became another parent in the house at the age of six. From that point on, he felt he had to take care of everyone in any room he ever found himself in. He had to give up everything that was his, everything that he might have deserved or wanted—or so he felt, based on how he understood his role. This wasn’t fake. This was real. He soon learned—that is, I soon learned—that these old programs didn’t serve me. I needed and deserved more. I was still this nice guy martyr as recently as two years ago. Now obviously, if you have a family, you are responsible for taking care of them. That’s part of the contract. But you don’t want to enable them and you don’t want to sacrifice who you are. That doesn’t serve any of the parties. It doesn’t serve you because it builds up resentment. And it doesn’t serve them because they don’t learn to be strong and independent in their own right. I served my time in corporate America to make my family’s life convenient, and I probably went a little overboard. I perhaps made it a little too convenient. That’s what I did and I’m not going to dwell on it. But once my daughters graduated from college and my wife was pursuing many of her life goals, what was holding me back? I had no more excuses. It was time to stop being a martyr and giving away everything I had. Two years ago, it came to a head, with the midlife crisis I spoke of earlier. Some devastating things happened to people I loved, and I went through therapy, and I answered the questions: Who are you? Why are you here? What do you want to accomplish? That’s when I left the nine-to-five to make radical changes to activate my destiny. I came to a point where I determined, not only could I do this, but I deserved to do this. I had to do this. Not in a selfish way, but in an intentional, purposeful, self-fulfilling way. If I had continued along my old path, I would have looked back with regret…. Clarity is organization, putting everything in its place. I imagine a wheel with its spokes, each of them corresponding to a certain part of our lives that needs to be fulfilled for us to be well-rounded: fun, wealth, spirituality, exercise, family, intimacy, learning, growth, enlightenment, and so on. Without each spoke in place, the wheel collapses. When each spoke is in place……….it carries us on the road to where we want to go.

After doing over fifteen years of hard time in a cubicle or office, you and your laptop have found Nirvana at the Starbucks around the corner. Mercifully, the career is over; the kids are gone. Now there is nothing left to distract you from the elephant in the room. You stare at your significant other with the most disconcerting doubts about whether the relationship has run its natural course. You own up to your part in friendships that have become more like placeholders. Years of meaningless, if tenuous, connection have left you hollow. Detox Your Circle, Activate Your Destiny establishes the premise for removing thirteen toxic elements—people, self-sabotaging behaviors, baggage, and meaningless rituals, to name a few—and demonstrates how decluttering can trigger a very powerful clarity. When we detox our Rolodex, our true nature and essence attract more of who we are. What ensues is a resonance that sets the tone and cosmic parameters for fulfilling destiny.

During a management career spanning 22 years, Ernest Sears Jr has worked in C-level roles, winning numerous awards for coaching expertise and creating winning culture. Having earned a Linguistics BA degree from Yale (1989) and an MBA from W.P. Carey School of Business (2002), he focused mainly on building cohesive, self-sufficient, high-performing teams in corporate environments. Mr. Sears taught Ethics in Management as an adjunct professor at University of Phoenix from 2005-2010. After reaching his own turning point and crisis of meaning that triggered the writing of this book, the author retired from corporate leadership positions in 2016 and launched a new business as a lifestyle design consultant and relationship strategy coach. Ernest Sears Jr is the father of two adult college-educated daughters and for the past 25 years, the life partner of Kiana Maria Storey-Sears. Check out http://www.detoxyourcircle.com/