Misadventures of an (Almost) Average Canadian 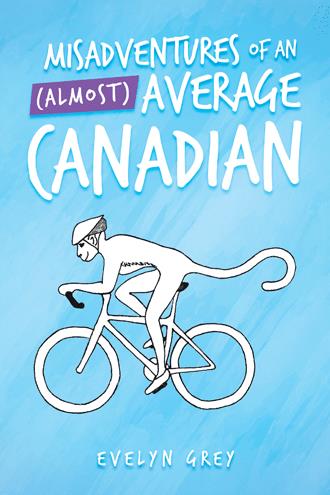 The best of my childhood memories revolve around spending part of summer at my Grandparents house. My grandfather, though a hardworking good person, was a hulk of a man with a deep booming voice, who quite frankly frightened me as a kid. My grandmother was a soft spoken, even tempered, tiny woman and possibly the world’s best babysitter. Their brown one story house was situated in a quiet gated community featuring winding roads that were fun to cycle on, and lead to goose populated lakes and parks, sandy and rocky beaches, and wide swaths of blackberry bushes. I would always be there with my older sister and sometimes got to visit with a couple cousins who lived nearby. It was a childhood paradise! There was always an adventure to be had. On the nearer sandy beach the water was shallow and at low tide it felt like I could walk for a mile on the sand, chasing baby crabs and searching for the most perfect shell to add to my collection. The farther beach required adult supervision due to the rougher deeper water, but it was bordered by huge logs and rocks that were a fantastic driftwood fort creation territory. Given the chance I would spend hours hauling chunks of wood over to boulders to make rock and wood caves to crawl through; like some beach hobo creating an entire home of interconnected, ultra-rustic rooms. Even around the house there was entertainment to be had. I never did learn how to properly play the game called dominoes, but remember spending afternoons creating elaborate set-ups of rows of dominoes across every surface I could get away with. Just to have the pleasure of watching them rhythmically topple into a preordained pattern. And then there was my grandmother’s closet! At the time she belonged to some ‘Star’ organization I could never remember the full name or purpose of as a child. I think it had lodge or religious affiliation, and involved volunteer work and singing? But more importantly to my young girly self it required the wearing of nice outfits. My grandmother had a little girl’s dream of dress up clothes: all kinds of fancy looking dresses, cute little hats, a drawer full of various dainty gloves, pretty shoes, and lots of large sparkling costume jewelry. Since she was a petite woman, so with a bit of creative belting I could fit into her dressy clothes as a child. The best afternoons at home were when my sister and I could don grandma’s finery, and have our afternoon tea and cookies pretending we were old fashioned English ladies, mimicking our invented version of genteel etiquette. Our clever grandma could even find ways for little kids to make themselves useful in her glorious garden, which surrounded the house in two layers. Flowering bushes went right up around the house, there was a wide path of grass encircling the house, then another border along the edge of the property of trees and bushes. If we were too energetically noisy inside, our grandma would hand us each a salt shaker with orders to ‘hunt the slugs’ that would otherwise feast on and damage her roses. There was a strange icky pleasure in finding the giant banana slugs, flipping them belly up to sprinkle salt on their undersides and watch their bodies hiss bubble and shrivel up. Then there was the balancing act of using two sticks to carry them to the nearby ditch, going ‘eeewww’ the whole time while making dramatic contorted faces and pretending to be grossed out. Unless of course I was feeling naughty and wanted to bug my sister, then I’d use my bare hands to touch the giant slugs and afterwards attempt to touch and slime her. In my defense, my sister was older and faster than me, and taught me how to behave this way in the first place… I remember the lush textures and smells of the garden, the riot of colour, the bold hummingbirds and monarch butterflies that would flutter around my grandmother’s head - but shy away from me. Even the giant fuzzy bees loved my grandma, I never once knew of her getting stung as she worked her magic among them. There was an occasional wandering deer, family of raccoons, even baby skunks which were ever so cute, but the mum must never be alarmed or you’d better run for it! A lesson my grandpa’s king german sheppard Max learned the hard way. He spent a week chained in the far corner of the yard for snarling at the wrong critter hiding in the bush. That’s a smell I’ll never forget! I remember Max being such an enormous dog I could ride him like a pony and tug of wars with him took both me and my sister on the end of the rope, and half the time he would still drag us around the yard like squealing rag dolls! There were birds a plenty, the most memorable being the tiny dark sparrows making their half bowl shaped mud homes under the eaves. Being brown on brown it was hard to see them but if we listened carefully we could follow the peeping sound of the baby birds to find them. Mustn’t get too close though as the protective parents would screech and dive bomb our faces in the most unnerving manner until we’d moved off! My grandmother still holds the greatest piece of my heart. She didn’t just teach me baking, sewing, good manners and kindness to plants and animals, she taught me the most important of life’s lessons: how to give and receive love. She nurtured my creative spirit like my soul was her rose garden, planting hope there and tending to it so it could grow, even when life gave me drought and rocky ground, the roots of my grandmother’s love went deep enough so her grace and kindness have always survived within me.

Ms. Grey relates her memories to share the many twists and turns of a life’s journey. Everyone has at least one good story in them, a unique voice waiting to be heard. Collected within these pages are not one but many good stories filled with fun, embarrassment, love, fear, joy, and pain. Though the details are individual and personal, the highs, lows, and in-betweens are highly relatable as we all travel such myriad paths in our lives. Far from generic, these tales are often full of raw, poignant emotion and are balanced out by an underlying tongue-in-cheek humor that is sure to delight readers with laugh-out-loud misadventures.

It is often said to write about what you know, as this is where the strength of any story — and storyteller lies. Truer words could not be written about this author’s work as she recalls memories, experiences and adventures down the winding road called ‘life’. All of Ms. Grey’s stories are related in an honest, open voice; to read them is to get an insight into her inner person, but more importantly into the inner person of oneself. In her opinion, Ms. Grey’s qualification as a storyteller is that she is extraordinarily ordinary in every way, growing up in a conventional way, with thoroughly standard looks, intelligence and skills. Her most notable achievement to date has been to stay unmemorable and unremarkable in all aspects of her life as she moves around the country, working whatever jobs come to hand for survival, and possibly…accidentally… becoming a very relatable icon of Canadian averageness.