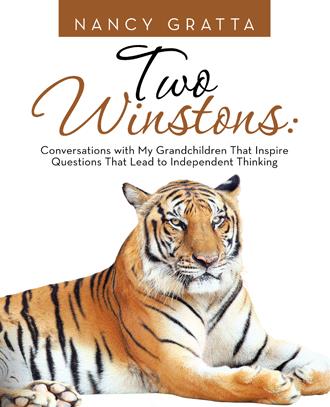 Two Winstons “Winston, want to see the video I took of you outside?” I ask. “Come sit next to Gammy.” I don’t know why I sometimes talk about myself in the third person, but Winston understood and came to sit beside me on the step. We had been outside a few minutes earlier. Winston ran around collecting things from the yard to fill up the bucket of his electric ride-on dump truck. Rocks, tree branches, sand toys, one item at a time, into the bucket. Anything and everything a treasure. He was adorable in his little boy bliss. Definitely worthy of a recording by his Grandmother. Now inside, I want him to see the video. “Look, Winston. That’s you.” Winston looks at the image on my phone, at me, then again at the phone. “There’s two Winstons Gammy? There’s a Winston outside?” “No honey, that’s you.” “He has a shirt just like me, Gammy?” “No Winston, that’s you. Gammy took a picture of you when we were outside. That’s you, wearing your shirt.” “Can I go outside and say hi to him, Gammy?” I have to admit I got a chuckle the first time I put this conversation on paper. I imagined Winston reading this in the years to come and thinking, as I did on that day, that he did not see the real picture. He was not seeing from my perspective. But, no worries, I rationalized, someday he will. As I reflected on my first take on this conversation I began to question. Did I really want three year old Winston to adopt my thinking? After all, how many people think they are less open to their intuitive gifts as adults because they were shut off from them in their childhood? And why didn’t I give room to Winston’s perspective instead of trying to win him over to mine? Is this a critical moment in the development of Winston’s independent thinking or am I just confusing the little boy?

Two Winstons is a sweet little book that engages the reader through amusing dialog between five year old Virginia, three year old Winston, and their sixty three year old grandmother. The questioning that follows each exchange lures the reader into a search for relevance to their own life. Have you ever thought about why you think the way you do or wonder why you make choices that end up with the same results? With Virginia and Winston as entertaining teachers, you just might find a new path that holds the answers to your old questions.

Nancy Gratta is a grandmother of four, two of whom you will meet in this book. Of the many rich and varied roles she has played in this lifetime, Nancy claims being a grandmother as the most fun of all. Nancy holds a Master of Education, specializing in Health. After twenty three years teaching in the public school system, from pre-school to college level, she retired and in 2006 established her business, Angels by the Sea. Nancy is a Spiritual Teacher, Reiki Master Teacher, and Psychic Medium. Her class subjects are varied and evolved, including among others, angels, guides, nature connections, meditation and self-healing practices. Her current focus is geared toward self-discovery through independent thinking. Thus the creation of her first book, Two Winstons: Conversations with My Grandchildren That Inspire Questions That Lead to Independent Thinking. She hopes you will have as much fun reading it and uncovering your own stories, as she did writing it.