The Little Book of Big Love from Heaven 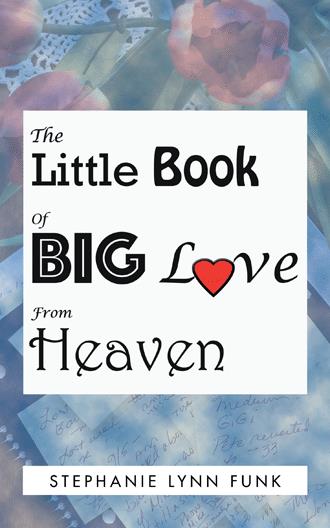 Sometime in the summer of 2012 I started having experiences that were so wonderful and so awesome that I didn’t want them to go away. On a couple of occasions I wanted to go with whatever loving presence had just passed through me. These experiences were different than anything I had ever experienced before. My life was happy and filled with love. I had a wonderful, fun husband of almost twenty-five years, and we were doing what we believed God wanted us to do. We were sharing our talents and gifts. We had loving families. I couldn’t ask for more. I was once asked if my husband, Pete, and I ever argued. In all honesty, Pete and I NEVER argued . . . . EVER! This wasn’t our first marriage, and we never dreamed we would marry again, so we entered the marriage wanting it to work. We were not fighters. We had differences of opinion, but possibly because we were long-distance runners, we had lots of time to work out the differences while we were running all those miles. Early in our marriage, we learned a concept of “seeking first to understand another before being understood.” That worked for us when it came to differences. I honestly don’t know when these events, I am about to share, started in the summer of 2012. They did not occur with any regularity or at any specific time. It was very random. One instance, which was one of the strongest, happened while I was waiting for a streetlight to change. I was watching the pansies along the median dancing in the wind. All of a sudden I had this feeling of immense love passing through from the right side of my body to the left, and I smelled the freshest smell I have ever smelled. The smell was like after a rain; that clean fresh smell but more intense. Every time I had one of these events, they only lasted a few seconds, but in all cases, I wanted to go with whatever or whoever was there. I had never felt this kind of love before. It was complete, and I thought I had the best love in my physical life. This was just so different, and I didn’t know why I was having these experiences. I shared these encounters with my husband, Pete, and started calling them my “God Hugs.” I didn’t know what else to call them. It just felt like I had been hugged by heaven.

This book is about the author’s journey over a six-year period experiencing heaven in ways she never experienced heaven before, realizing that heaven is not limited by our human concept of heaven. If we open our hearts and shut down our heads, we can experience heaven’s awesome love, support, comfort, and even humor and fun.

Stephanie Lynn Funk has a Masters in Business Administration and has worked most of her career in Health Care Administration. She was also a technology consultant and instructor for seniors and senior businesses for fifteen years before retiring. She enjoys running and dancing. She currently lives in Arizona.