Onco III and a Half

The Monster Is Unmasked 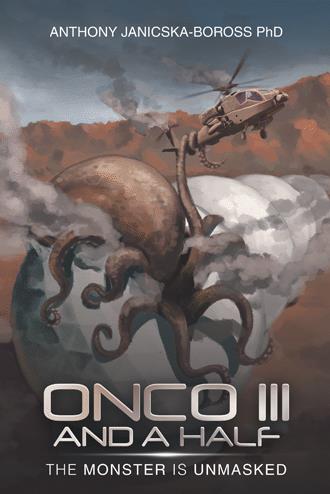 While developing a product that will surely end world famine, scientists find that the finished live product has the ability to shed its mutated DNA, thus becoming infectious and a danger to to humanity. In fact, it comes to develop intelligence, together with a belligerence that causes it to be compared to a mad dog. This aggressive behavior prompts the Government to attempt to train the creature in the Weapons Development Authority, a top secret research facility. Colleen Sans, a Molecular Biologist, is placed in charge of the Project which is undertaken in the Maralinga Area, within the secret Woomera site, the area where the first nuclear bombs were tested by Great Britain during World War II. The task Colleen was assigned to progresses well until the Creature becomes too intelligent and is then transferred to a part of the most secure site in the country, for further evaluation and training. This site is the subset of the Pine Gap facility, which handles all electronic communication entering the country, and maintains satellite surveillance of the entire planet, jointly shared between Australia and the U.S.A.

The planet is running out of food. In an attempt to end world hunger, a group of scientists have developed a product that is in itself alive. Though fully capable of fulfilling its designed purpose, this product – this entity, dubbed Creature - is becoming intelligent and dangerous. Even worse, the government now sees its potential use as a biological weapon. Colleen Sans, the scientist in charge of studying and training the entity as it evolves has developed a strange relationship with Creature behind the walls of a secret government research facility. When she and security officer Frank Vagyoczki learn the government wants to use Creature for military purposes, they escape and take creature to an undisclosed location. Now Colleen and Frank must not only deal with their personal attraction to each other while defending against military offenses, but also must work to discover the true nature of Creature. But will they find a way to stay one step ahead of their pursuers, and keep Creature from becoming a tool for destruction before it is too late? In this continuing science fiction thriller, a scientist and a security officer must do everything in their power to save a living organism from becoming a weapon of destruction in the hands of the government.

Anthony Janicska-Boross migrated from battle torn Hungary to Australia after the Second World War. He raised five children mostly on his own and managed the offshore construction of many oil-gas platforms with a crew of 350 men, around the world. Although he is now legally blind, Anthony continues to pursue his passion for writing. ONCO THREE AND A HALF is the fourth book in a series.