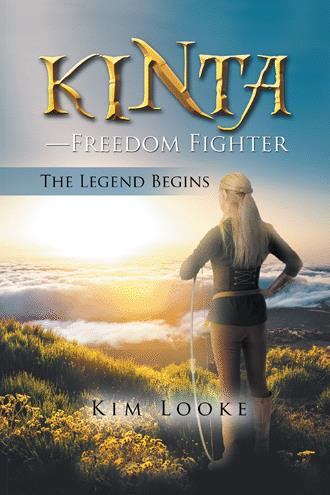 Misty had morphed into a large white horse this morning and Kinta was riding her bareback, dressed in her full battle armour and long bow, totally absorbed by the passing parade of soldiers and wagons in front of her. They were completely invisible and standing totally still beneath a large leafy tree beside the dusty road, watching a convoy passing slowly by on their way towards the village of Rocky Heights. There was a general mumbling and muttering of discontent among the soldiers regarding their displeasure at the lack of tangible results as they passed slowly by on their way to the next site, which was being covertly overheard by Kinta and Misty. A large choking cloud of fine powdered dust hung suspended in the unmoving air and settled on everything along both sides of the road, including the two invisible observers as they stood back under the cover of trees. As the last of the soldiers and wagons passed slowly out of sight around the bend, Misty and Kinta turned slowly and made their way quietly into the surrounding scrub, being careful not to disturb any of the dust-coated branches and leave a tell-tale indication of their passing. The dark sky overhead was rapidly filling with huge thunderheads and black storm clouds, laced with flashes of lightening, which made the air thick with humidity and charged with electricity. Kinta rubbed her hand gently along the length of Misty’s neck, gently removing the thick coating of powdered dust that clogged her mane and leaned her upper body forward to speak quietly into her ears. “So far, everything that we’ve seen and heard indicates that things are already coming to a head!” she said, “The soldiers are becoming more frustrated by Papa’s tactics and this is making Vylaine angrier!” Misty shook her large white head and shaggy mane and whinnied quietly. “That’s what worries me … Vylaine becomes unpredictable when she’s angry!” she said, “I think it’s time to up the ante!” With that, the two girls began their meandering trip back home, walking slowly along the hidden back trails to Veritas that they had followed on their way to intercept the convoy. Kinta’s personally designed light-weight warrior outfit included a pair of thin, skin-tight, soft leather pants, and her legs straddling Misty’s bare back had caused the thin pants to pull up tightly into her crutch and form a virtual sensitive second skin. Misty’s slowly ambling walking gait caused a regular constant back and forth rocking motion of Kinta’s hips and the subsequent continuous rubbing of her thinly covered crutch against the bony ridge of Misty’s spine was being felt through the leather pants. After several minutes of this regular rocking motion, Kinta noticed an unusual, but definitely not unpleasant, warm tingling sensation developing between her legs and spreading quickly up into her lower belly. She gently leaned her upper body slightly forward to apply more focused pressure to her super sensitive crutch from the bony ridge and had to suddenly bite her lip to prevent a soft moan escaping as the intense pleasure heightened immediately. As the ongoing pleasurable stimulation to her now highly aroused female parts continued, Kinta began to feel an unfamiliar warm moistness developing within and, upon glancing down quickly, saw an emerging damp patch in the crutch of her tight leather pants. Then, completely beyond her control, Kinta experienced the shuddering spasm of her first orgasmic release, which caused her back to arch and her legs to suddenly clamp down tightly around Misty’s girth, who thought she simply wanted to go faster and responded accordingly. The sudden increased change in pace made Kinta clamp down firmer again with her legs and the increased gait and constant rubbing caused multiple orgasms to continue for quite some time along the trails. Kinta’s self-awareness had certainly been awakened today and she felt slightly flushed and pleasantly exhausted when they finally arrived back at Libertas and she climbed off Misty’s back and changed back into her dress. However, when she alighted from Misty’s back, her legs were still a little shaky and the short walk back to the Tavern was slower than normal.

Seventeen-year-old Kinta is an innocent young woman enjoying an idyllic life in her seaside village—until the high priestess, Vylaine, suddenly becomes aware of Kinta and her mother’s special powers. They have no choice but to embark on a desperate journey to escape the clutches of evil tyranny, leaving all their lives hanging perilously in the balance. Along the way, Kinta meets an unlikely friend who joins her on her travels and helps her transition from an awkward teenager to a confident young woman as well as to discover her true destiny and first love. As the family stands resolute in the daunting face of seemingly hopeless adversity, they refuse to buckle under immense pressure or risk compromising their values until peace is restored to their land. But will they be successful in their mission or die trying? In this exciting fantasy novel, a teenager sets out on a twisting, turning, coming-of-age journey where she matures into a courageous warrior determined to seek freedom and justice for all.

Kim Looke grew up in a sleepy little West Australian wheat belt town. After eventually leaving home to join the Royal Australian Air Force, he completed a trade apprenticeship in avionics and served twenty-six years, retiring in December 1993. He and his wife, Joan, now reside in South East Queensland. Kinta—Freedom Fighter is the first book in an intended series.