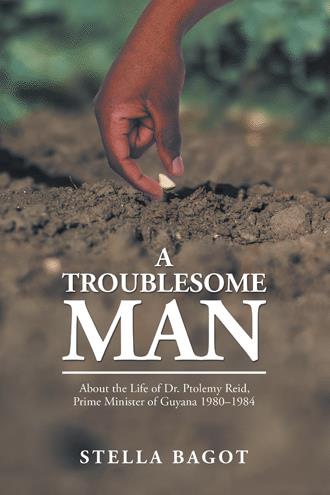 Dr. Reid’s main focus as a politician was to make Guyana as self-sufficient as possible and make Guyanese a dignified, self-reliant people. He felt Guyanese could reach such goals by developing their land and making it fertile. It is said that he was the real moving force behind the “feed, clothe and house ourselves by 1976” programme promoted by the Burnham government. He had such a large dream that he threw his full weight behind it. What the government of Guyana tried to achieve in the first half of the seventies decade was phenomenal. We have only to look at the many initiatives and ventures that were begun, specifically by the Ministry of Agriculture, to appreciate the effort that was made to realize this very large, almost utopian endeavour. However, it wasn’t that Dr. Reid was unaware of the magnitude of the undertaking and the degree of hard work it would entail. In a speech to Community Development officers on July 23, 1966, he mentioned that the officers’ main difficulty would be facing community resistance to change, and he said that they would need to engender “a spirit in the communities to face up to the challenges of our changing society.” Dr. Reid himself tried always to evoke that spirit of meeting challenges head on. In another speech delivered also in 1966, but this time to teachers graduating from the Government Teachers College on the occasion of the opening of GTC week, he commended those teachers who had volunteered to teach “in remote areas like the Rupununi and Bartica.” He referred to the government’s effort “to encourage Guyanese to leave the overpopulated coastlands and settle in the hinterland” as he encouraged the teachers to become “pioneers in the call for young Guyanese ‘to go south’.” These exaltations demonstrate Dr. Reid’s belief that developing the land was crucial to achieving a “changed structure of the economy” wherein Guyana would have “less dependence on sugar, rice and bauxite.” Dr. Reid clearly felt that Guyana needed to embark on its own self-determined course which was one not dictated by the developed world and quite unlike theirs. In an April 5th, 1970 article of the Sunday Graphic, he is quoted, while he was Minister of Finance, as calling for “radical surgery” to bring about “a genuine revolution” of the nation’s economy. He believed the economy was being hampered in its growth by the vicious policy of international aid. “He told the 13th annual congress of the ruling People’s National Congress that there was need to wage a ‘resolute war’ against poverty and unemployment, a war which would require taking ‘bold’ measures to change the economic system.” He warned that “governments too timid to initiate necessary reforms often lose not only their popularity but their mandate as well.” It was clear that, in his political career, Dr. Reid abhorred and resented what he saw as interference from outside forces. He once said that he told the U.S. ambassador that there would be no peace until there was no meddling in another’s affairs. The article last cited notes that in his paper on “The world Today in Economic Terms,” which was addressed to the 13th annual congress of the People’s National Congress (PNC), Dr. Reid stated that “[A]id is tied to . . . expected political alignment to the donor country in major matters on the world scene and . . . key officers in the underdeveloped countries are subject ostensibly on training to indoctrination [sic.] in the donor country or sent on free trips so that they would become sympathetic to the way of life and thinking in the donor country”. Thus it was that as Deputy Prime Minister and Minister of Agriculture and Nationall Development (of Guyana), for a good part of his political reign, he doggedly pursued a course to enable Guyana to feed herself. Early in the seventies decade, the government of Guyana announced its programme to “feed, clothe and house ourselves by 1976.” This initiative had a definite economic target- to save foreign exchange by cutting spending on imports. The government, therefore, banned a number of (imported) items from coming into the country. At the PNC’s annual congress in 1972, “Dr. Reid said that although it may not be possible to produce every single item of food now imported, it will be possible to provide enough varied foods ‘to enable the nation to be properly fed, to provide enough variety in the diet, and at a price reasonable both to consumer and producer’.” (Daily Chronicle, April 6, 1972, p.1). When we consider the different projects embarked upon by the government and promoted by the Ministry of Agriculture in a short span of time, there is no doubt as to the serious intent to achieve this declared national objective to be as self-sufficient as possible. We are told in the April 6 headline article of the Daily Chronicle that “activists of the ruling People’s National Congress have begun formulating tactics to be used in achieving the objective of ‘feeding, clothing and housing ourselves’.” It was estimated that some $31.5 million would be saved by embarking on this programme, $14 million alone coming from “feeding ourselves.” Dr. Reid said that employment opportunities would result with some 10,000 full time jobs being created from feeding the nation. He cautioned that these were “preliminary estimates based on the assumption that the present methods of production will be maintained” (p.1). To achieve this national objective of providing for the nation’s basic needs, an impressive number of projects were started in the 1970s and 1980s. For instance, the 200 square mile Matthews Ridge Agricultural Project, with a population of approximately 3500, was singled out by Prime Minister Burnham as the “pilot of Guyana’s thrust into the hinterland which must demonstrate to the rest of the country all that can be done with land.” Three years after the manganese company, that was previously operating at Matthews Ridge, had left the area and the government had decided to convert it from mining to agriculture, there were startling results.

Herein is the life story of Ptolemy Alexander Reid, minister in the government and prime minister of Guyana between 1964 and 1984. Here is a record of Dr. Reid’s childhood and youthful years in Dartmouth, Essequibo, Guyana, an account of his educational endeavors, and the highlights of his experiences as a veterinarian, politician, and family man who maintained an ongoing love relationship with his place of birth. Dr. Reid said of himself, “I am a troublesome man … always troublesome. I grew up troublesome.” In this book, you will see that he was troublesome all for the good, deserving to be remembered as a hero of Guyana.

The author is herself a native of Guyana, who, like Dr. Reid, was born in the Pomeroon-Supernaam region. A retired teacher of English, she lived a major segment of her adult years under the Burnham regime in which Dr. Reid served. She spent hours in dialogue with Dr. Reid in his retirement years and accompanied him at events over which he presided and/or was honored. At the end of 1990, she moved to the United States of America, where she now resides.